Some of Porcheron's enamel work.


Lucien Porcheron was born in Le Grand Pressigny in 1876. In his day he was a well regarded post-impressionist artist, but today is forgotten, even locally. 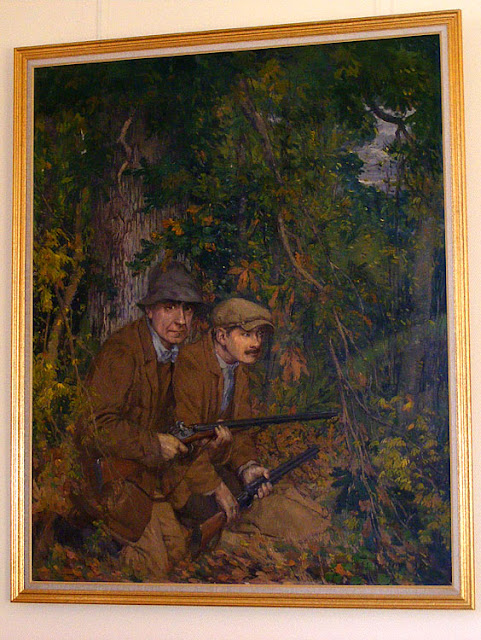 On the Alert (the artist and Mr Hilaire), oil on canvas.


He showed talent early on and received a scholarship to attend the Fine Arts School in Tours, where he did well. This led to another scholarship, taking him to Paris and the National Fine Arts School. There he joined Henri Matisse and Georges Braque and became part of their circle of artist friends. Whilst there he entered a competion for applied art for industry organised by the city of Tours, and won several prizes for his furniture. 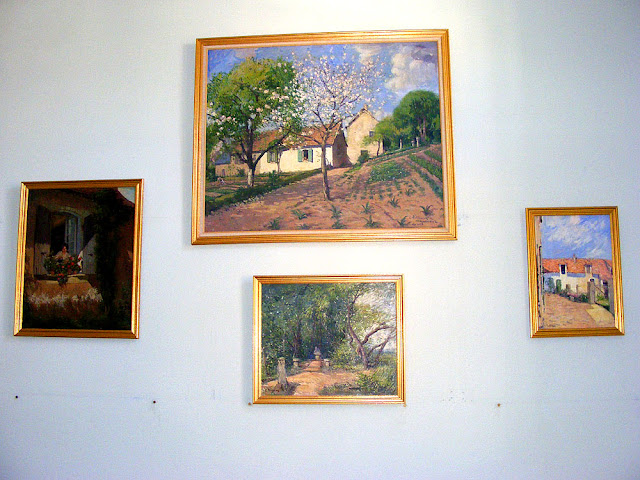 Oils on canvas, depicting La Joubardière in the 1930s, the artist's home near Le Grand Pressigny.


When World War One broke out he was already 38 years old, but he joined up as an infantry gunner, winning several citations for bravery. During the war he married a young theatre costumier, Bernadette Chaigneau, and after the War they moved to Provence, where he painted many canvases. He was a competant portraitist, often painting his beautiful young wife as well as sail boats on the sea and coastal inlets. Not just a painter though, he was an artist through and through, working in enamels, sculpture, costume, furniture, spinning wheels and violin making. Always drawing, he brought home a series of drawings from the War -- portraits and scenes showing life in the trenches. Scavenging flat bones from the kitchen he had engraved portraits of his comrades on them too, as well as making tobacco boxes and small chests. He liked working with slate and carving stone (his father was a stone mason). He was an excellent draftsman but although his paintings are technically competant and often charming, they are not much different to a host of other well trained painters of the day. To my mind it is his all-round qualities which make him outstanding, and particularly his skill with furniture making and enamels. 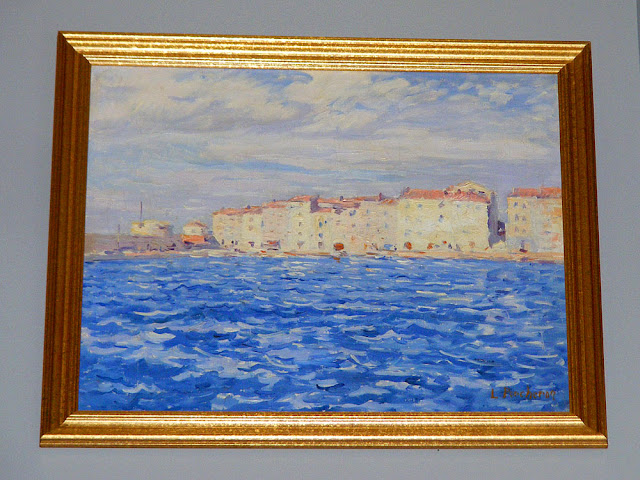 One of the Provencal canvases.


Surprisingly modest when it came to promoting himself, he was often reluctant to sell. His wife had not given up her career when she married and they often survived on her earnings. He was described greatly resembling Auguste Renoir -- same goatee, similar short stature, lively, independent, intelligent, liberal, good humoured, hard working, energetic and cultivated but he could be fixed in his opinions and sharp tongued. 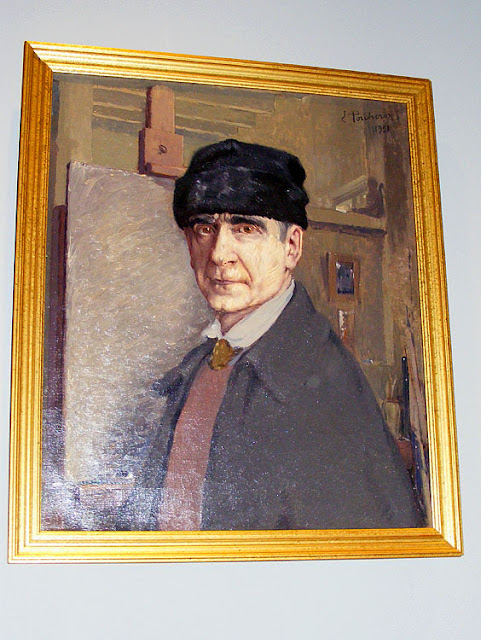 
In later life he moved back to La Joubardière, the family home on a farm near Le Grand Pressigny that his father had built. He spent his time painting rustic countryside scenes of the Touraine. He died there in 1957 and at his request he and his wife are buried together, hidden in a small wood overlooking the village. Unless you know the grave is there you would never guess at its presence. We were shown it one day by Joël, who was leading our weekly walking club outing. 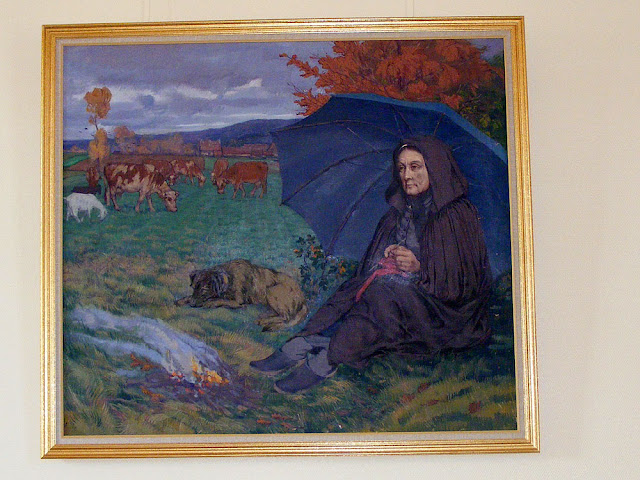 Shepherdess Under an Umbrella (look how similar her cape is to the one Dotty wears at the market).

Porcheron commissioned a local mason to make his tomb, in a parcel of woodland that he owned at the time, near Courvault and close to his family home. He decorated the interior with mythological paintings, using a durable paint that would last for centuries. Typical of him, he made (and then remade) his own coffin. For his interment he insisted on being transported in a cart drawn by a white horse, attended only by his wife, dressed in red. He refused a religious burial because he had fallen out with the local priest, who refused to allow him to decorate the church. He wanted to be removed from the coffin and it returned to the house for his wife's eventual use. In the end she refused to comply with his request for her to go alone, dressed in red, and tip him out on the floor. He remains in his coffin, and she was accompanied by two friends for the interment. She joined him in the tomb in 1965 and today the grave is covered in vegetation and moss, almost invisible in the undergrowth.

A wartime sketch (I suspect these two are doing something rather gruesome like cleaning a stretcher).

He left a substantial collection and archive to the municipality of Le Grand Pressigny. Joël had told me I would find some of his works on display in the town hall there, so one day I popped in to enquire if I could see and photograph them. The young woman on reception couldn't have been more welcoming and helpful. She grabbed a set of keys and said 'follow me!' We went upstairs and she unlocked two rooms with his paintings on the walls, and pointed out the glass cabinets with his other work in. She asked me if I wanted to see the archive, but I felt I had enough material with what was on public display. At a later date, if I do want to see the archive I will make an appointment. 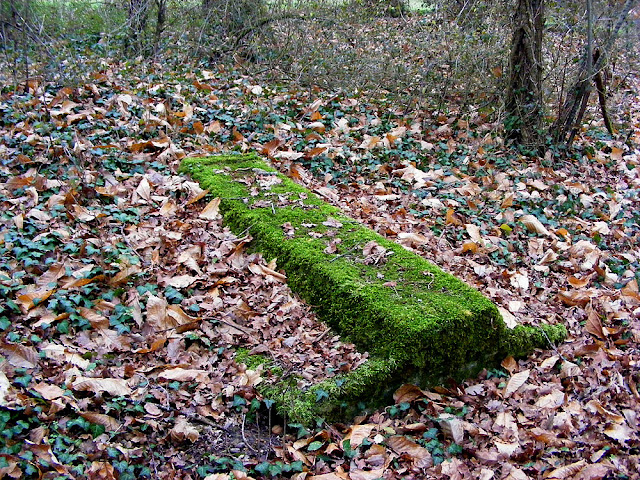 All you can see of the tomb now. 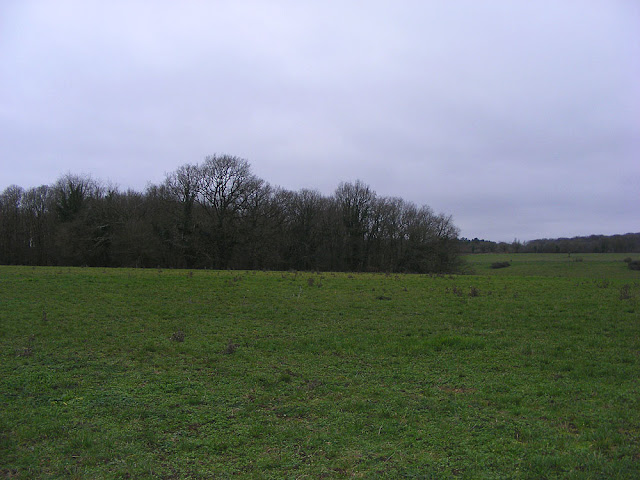 The isolated wood where Lucien Porcheron and Bernadette Chaigneau are buried.

To read more about Lucien Porcheron and see more of his works, poetry and personal correspondence, click on this link.

Very interesting post, Susan. M. Porcheron is definitely a multi-faceted artist. Of course, as you suggested, I had never heard of him!
I like his portraits better than his landscapes, because they show the personality of the subject, especially the self-portrait.

Great to hear about local artists who capture the spirit of the area. Always interested to hear about more and not just the more famous ones.

Thanks Susan for researching and posting this. It's fascinating to learn about locals from the past.

This has always been an area rich in history, both local and national.

Thanks for this. Not only is it interesting, but I can use it in my French class. We're doing biographies - our choice of person of interest and it's fun to do someone not currently famous.

Glad to have been of assistance with your French class. I can more or less guarantee no one will have heard of him :) If you would rather do a woman, given the timing, International Women's day/week/month, click on the link for Paule Richon. She's a really interesting artist.