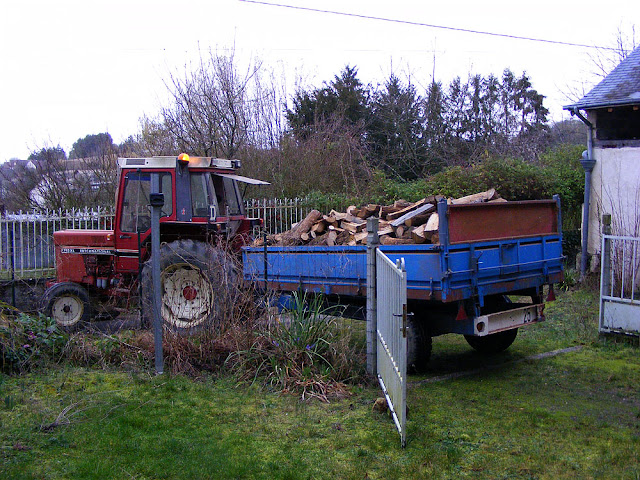 When my regular firewood supplier Georges* delivered a load in mid-January he warned me that he was now out of wood and I would need to find someone else to see me through to the end of winter. Part of the problem was that I had unknowingly given away part of the wood he had allocated to me because I had ordered some on behalf of friends in Boussay. His stock has been running low anyway and the quality of his wood deteriorating. I've been complaining to him for the last two years that the wood is wet and he swears it is just surface damp and will dry with a weeks storage under shelter. Well, sometimes it does, and sometimes it doesn't. But he reliably turns up when he says he will, I like him, and we've agreed that he will put aside 14 stères (cubic metres) for me next year, to be delivered at 3 stère intervals, and with some leftover for unexpected cold snaps or friends with holiday houses who come for Christmas.

I mentioned to some neighbours that I would need firewood sometime in February and they told me they used Norbert*, the brother of a mutual friend. They gave me a phone number, which turned out to belong to a young woman who had never heard of Norbert. Luckily I ran into his mother in a bar and she gave me his correct number. I rang him up and he came round to check out the situation. Our driveway is rather narrow for getting a tractor and trailer load of wood down, but he said he could do it. Our neighbours just have theirs dumped in the street and no one can get through until they've cleared it. This is normal for Preuilly, so no one is bothered by this. 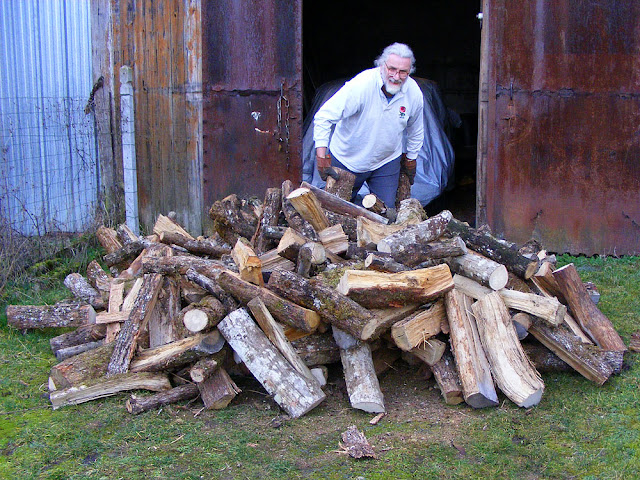 Two days later he arrived and carefully reversed down the driveway with his big rig. The wood got tipped out in front of the garage and we chatted about the firewood business. His wood is the same price as Georges, and one glance was enough to tell me it was better quality. It's also a mix of oak and hornbeam, which I prefer, rather than just oak, which is what Georges deals in. I'd like to switch suppliers now, but I've already ordered next year's wood. Also Norbert told me some gossip about Georges, which if true, is sad for him and his family, and may explain the declining quality of the wood. All very embarrassing really. I've said to Norbert that what I might do is split my order between the two of them next year.  Georges will have no trouble selling the excess wood in today's market.

My more immediate problem is that I still have to get through to the end of April though, and will have to find someone else with wood by the end of March. That is going to prove very tricky I suspect. Norbert doesn't have any more he can offer me now, so I'll probably have to go to a big wood merchant and pay more. To add to my dilemma, Georges has now rung me to let me know he's acquired 1.5 stères of maple and would I like it? I have thanked him for thinking of me and said yes.

*Names have been changed to protect reputations and prevent embarrassment to those concerned.

Assuming that's a photo of Norbert in front of the garage, I'm smiling at the thought of your meeting his mother in a bar. Perhaps he's younger than he appears.

That's Simon :-) Not much point in changing people's names if I then post a photo of them! 'Norbert's in his forties I would say, and his mother in her eighties I reckon.