Whenever I have American clients who are keen gardeners they spend a good deal of their time going around Loire Valley gardens remarking that they can't grow certain plants because the deer eat them. It's a constant chorus at Villandry and Chaumont of 'Oh no, deer eat that!' or 'Hmm, I wonder if deer eat that?' There are very few plants deer don't eat apparently. 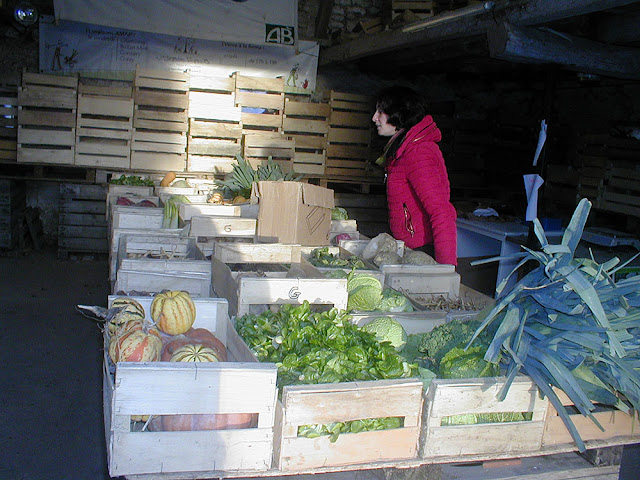 If you live near woods here in the Touraine, you might have problems with deer in the garden, but most people don't. I have deer give birth in the orchard, but have never noticed any damage done by them. Sadly though, my friend Sylvain, who owns the organic market garden that I buy my vegetables from, is suffering more and more depredations from deer. They've developed a taste for organic veg and he is struggling to keep them off the farm now they've discovered this tasty source of healthy nutrition.

Two roe deer Capreolus capreolus (Fr. les chevreuils) head for an electric fence and the woods beyond (not on Sylvain and Tony's farm, but in the Claise Valley only a few kilometres away.)


Originally they came once, then occasionally and now more and more frequently, in the night. In the beginning Sylvain just viewed it as a hazard of his particular style of farming. That the local rodents and deer should munch a few veggies in the field seemed to him to be natural and inevitable. 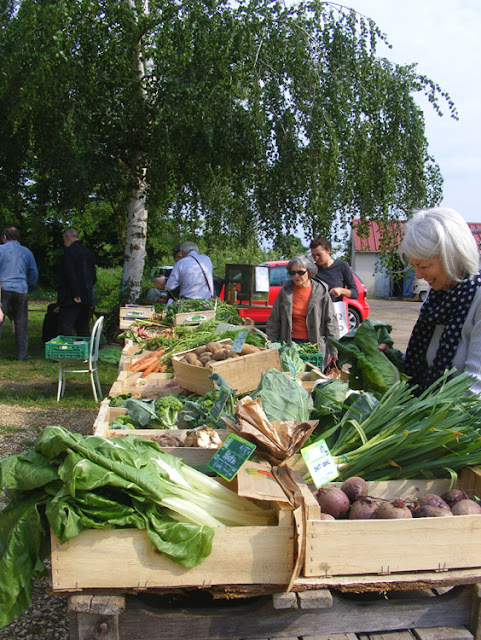 Unfortunately, the deer seem to have been telling their friends and liking the diversity of what they are finding on the 11 hectare farm. According to Sylvain, it started with the lettuces, then the zucchinis. Soon they were gorging themselves amongst the beetroot and the carrots. Now they are attacking the leeks, parsnips and black radishes, which they've developed a taste for. 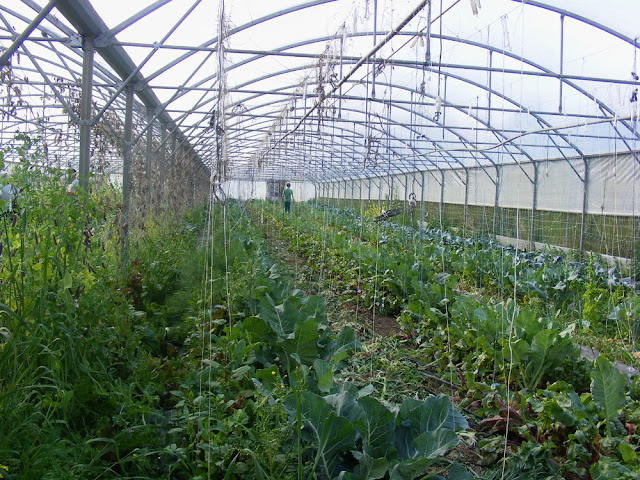 He's lost 1.5 tonnes of beetroot, 500 kilos of leeks, as well as turnips. They don't eat the whole plant, just take a bite, sometimes uproot the plant, then move on to the next. The damage is significant. He says 2.5 hectares out of the 4 hectares put to vegetables are unuseable. He's tried protecting crops with tarpaulins but they end up trampled and torn. Only the crops in the greenhouses are safe. 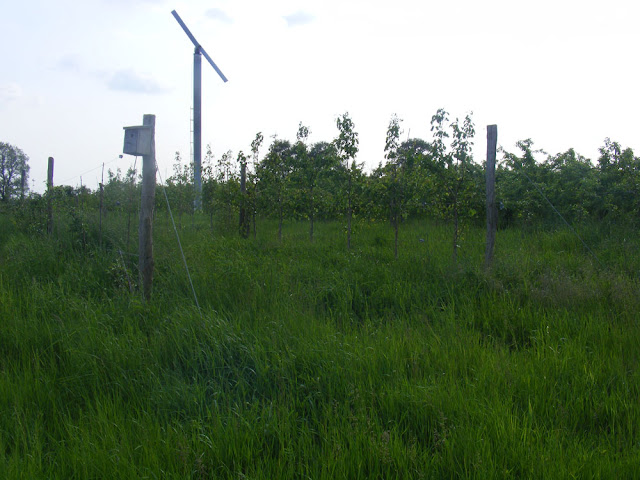 He and Tony, who owns the orchard on the other part of the farm, have been farming there for eight years now. Their main focus is supplying veggie boxes to clients in Tours. Sylvain employs two people and uses WWOOFers extensively. The farm is more than just organic, being run on permaculture principles. They want to be as close as possible to nature. They didn't think they would end up at loggerheads with the deer. 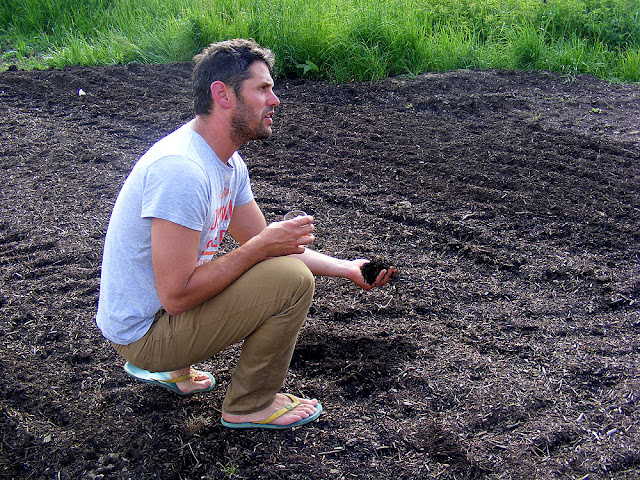 
The farm borders the Forest of Preuilly, where there is lots of large game animals and due to the terms of the legacy which makes it public property, hunting is not allowed in the forest. All farmers suffering depredations by wild game in France can apply for help from the national hunt federation, so that's what Sylvain did. Three years ago a €5000 electric fence was installed by the hunt federation, but the 11 hectare farm is surrounded by hedges. Whenever the hedge touches the electric wire, it shorts out and stops working. In January Sylvain took the decision to demount the electric fence, since it didn't work. The alternative is a 2 metre high deer proof fence, around the 1.5 kilometre perimeter, and which he will have to pay for without assistance. In the meantime he's purchased a gas gun in the hopes the noise will scare the deer away. 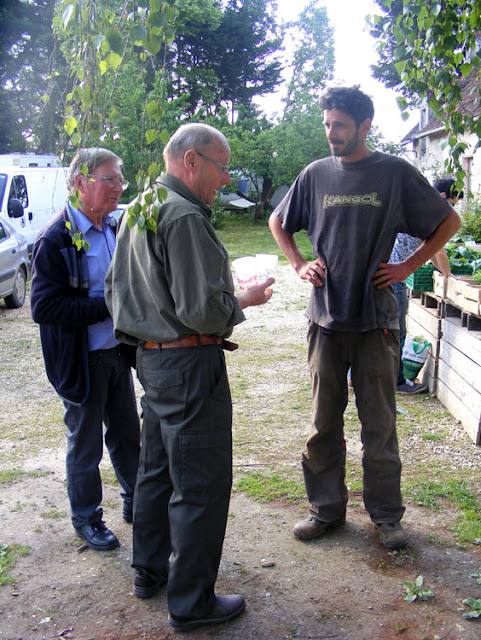 The hunt federation isn't very sympathetic. As far as they are concerned Sylvain failed to maintain the area around the electric fence either by brushcutting or herbicides as would be normally advised, so of course the fence failed. But using herbicides was of course impossible under organic farming rules, and brushcutting would have been too onerous an addition to the tasks already being done by hand by the very small team. The hunt federation representative who deals with issues to do with damage by wild game thinks that it is something that organic farmers do not plan for. He says more and more farms are converting to organic, but they don't anticipate or budget for protecting their crops.

Link to article in the Nouvelle République (in French).

Email ThisBlogThis!Share to TwitterShare to FacebookShare to Pinterest
Labels: Food and Drink, Gardens and Parks, nature and wildlife

No, he is implying that organic farmers are all hippies with their heads in the clouds and that real farmers (aka non-organic farmers) have generations of knowhow and common sense at their fingertips and are prepared to spread herbicides willynilly all over the countryside in order to ensure their electric fences work to repel deer.

Errr? Why did he demount the fence??
Surely he should have just moved the fence 2 metres inside to allow a mowing width.... and room to maintain the hedge.... yes, he would have lost growing space, but compared with what you've listed above, any loss of crops along that line, is more than covered by the conversion of the damaged crops into undamaged ones.
Also, suggest to him that they go into full scale production of soups, etcetera from the damaged ones!!
Sounds to me like they haven't really thought the whole thing through....

Trouble is he's not allowed to do that.

I suspect it's his labour shortage that is driving his thinking.