Saturday evening was our walking club's annual dinner. Since it was at the Hotel Restaurant de l'Image, just around the corner from our house, there was no excuse for not going. And besides, it was fun and the food was good. The club uses the dinner as a way of rewarding the level of involvement and activity members have demonstrated during the year. The list price of the dinner was €35 per head but I don't think anybody there actually paid that personally. Everyone got some sort of club subsidy for doing something for the club over and above just turning up and walking. Some people made crepes for the pancake day social event, some people joined trail maintenance working bees, some people photographed and blogged or something (that would be me...) 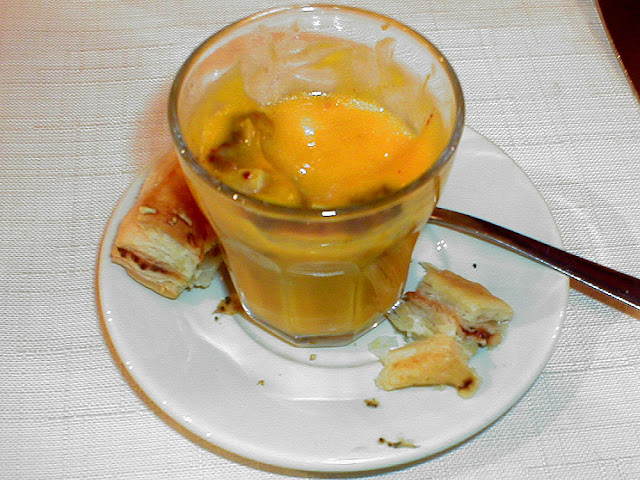 At the end of the evening we ended up folding napkins for fun. It all started because someone idly folded his napkin and those of us sitting next to him were intrigued. He said his grandfather always folded his napkin like that at the end of a meal, and showed us how to do it. The next thing you know the whole table of 30 odd people was folding napkins, then Martine the restaurant manager showed people how to do the fold that greeted us when we had sat down a couple of hours earlier. So we went out for dinner and came home with a new skill. Sorry - I forgot to photograph dessert, which was nougat icecream with apricot coulis. But don't panic - Simon took a photo of this dessert (his favorite) years ago.