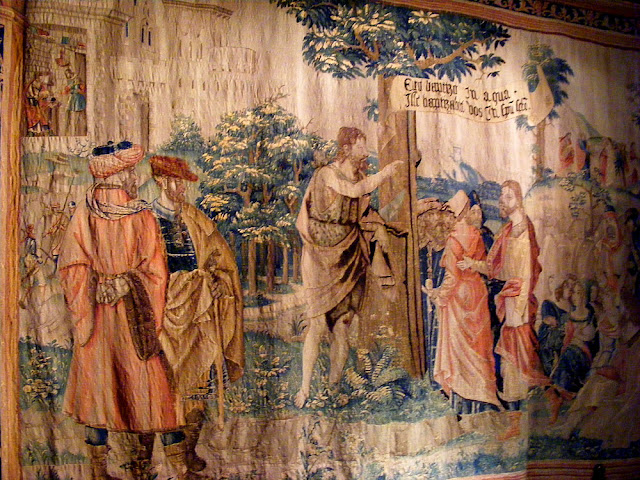 This very fine silk and wool tapestry is one of fewer than half a dozen survivors of the 16th century tapestry workshops of Tours. The reason such tapestries are so rare is that, although the silk producing and weaving industry was well established in Tours from the 15th century onwards, and peaked in the 17th century before being superceded by Lyon and dying in the 19th, there were only ever a few tapestry workshops in the city, perhaps just for a few decades from 1520. The quality is so high that the output would necessarily have been small and the majority of weavers in the city, hundreds of artisans, were not working on tapestries but on cloth for furnishings and clothing.

The tapestry is part of the collection of the Chateau of Langeais and is one of a set of four depicting the life of Saint Saturnin. Two are in the collection of the Chateau of Angers (home to the much more famous Apocalypse Tapestry) and the fourth was stolen in 1926 and has not been seen since. The style is Italian and the designer is assumed to be the Florentine painter Andrea Polastron, who lived in Tours in the 1520s, working first for Jacques de Beaune de Semblançay, then after his execution for possibly trumped up charges of embezzlement, for King François I. It was Jacques de Beaune de Semblançay who commissioned the set, and he bequeathed them to the Church of Saint Saturnin in 1527.

Only one other Tours tapestry remains extant, and it hangs in the Church of Saint Pierre in Saumur, the place for which it was commissioned and where it has always hung. It came from the Duval workshop, who were active in the second quarter of the 16th century and began work on it in 1538. It took four years to finish and the artists were Angevin (Robert Delisle and Jehan Delastre).

These tapestries must have taken months to produce in view of the intricacies of the design and using both silk and wool. The result is stupendous.

Think years, not months. Two to three years was the norm, and these apparently took four.