So - another summer over, and according to the meteo, it's been cold in Preuilly. I was rather purturbed to see that the temperature has been down as low as -3c, especially as we had left the water turned on at the house so that the roofers could finish their magic. The thought of burst pipes was too much, even though most, if not all, of the pipes will probably have to be replaced.

Luckily, we have recived an email from Alan and Jane, who live in Preuilly. A quick pleading email and Alan was down checking that the stopcock was off and the tap outside on the back of the house was open. It appears that either the roofers or our neighbours were on the ball and this had been done, but it's a huge relief to have confirmation of this.

To celebrate, a photo of last year's winter 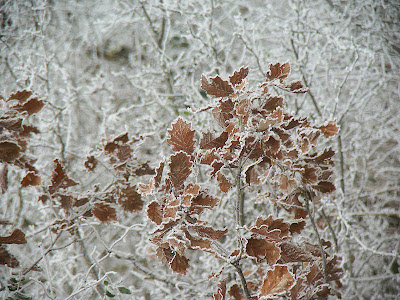 We have recently received a number of emails from people who know the area in and around Preuilly. Some of these people are English, and either live there permanently, or have property there that they visit for extended periods, but we have also received email from French people who live in Preuilly. It seems a bit soon to have become celebrities (no matter how minor) in our new town, but apparently there are a number of people who like what we are doing - so that's nice!

I can confirm that it has been cold in the Touraine, but it was colder before I returned from the U.S. last Tuesday. Now we are alternating cold sunny days and cold dreary damp days. I just spent some time reading your blog and admire you for the work you are doing on that house. Ken