Bonneuil-Matours is where the road from Preuilly to Poitiers crosses the Vienne river. There is a photo of the bridge here.

Next to the bridge there is a small school, on which there is a plaque: 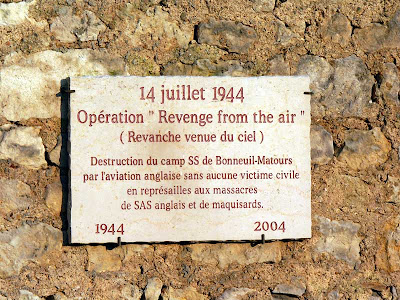 14 July 1944
Operation "Revenge from the air"
Destruction of the SS camp of Bonneuil-Matours by the English aircraft without civilian victims in reprisal for the massacre of English SAS and Resistance fighters.
The SAS had a base behind German lines in France immediately after D-Day in the forest near Verrières, South-east of Poitiers. On the 3rd of July the base was surrounded and the SAS soldiers shot after capture, along with a number of local men.

For about a year I have assumed that the building bombed was the school on which the plaque is mounted. However, I have done a little research and it now appears that the target was the Château de Marieville, which can just be seen on the skyline in this photo. 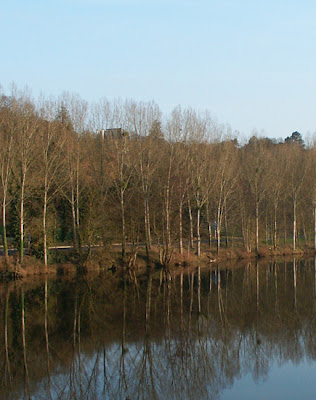 From what I have since discovered, the Aircraft involved were Mosquitos of 464 (RAAF), 487 (RNZAF) and 21 (RAF) Squadrons. These are the same squadrons involved in the famous "Operation Jericho" (the bombing of the Prison in Amiens), and the even more famous raids on the Gestapo headquarters in Aarhus and Copenhagen.

There is a report on the raid (in French) here.

Very interested to see the plaque dedicated to the RAF raid on the SS.
I served (luckily for me after the War) on Mosquitos so it made me take notice.
Of considerable note is the fact that this raid was apparently the first use of napalm, a most suitable weapon for use against the SS.

I am surprised that this raid isn't better known - I wonder how many similar raids happened that have more or less slipped off the radar?

You have to say though - as a navigational aide the Vienne river would take some beating.

Ivisited the site just before xmas 2010.On the opposite side of the road to the plaque,there is an archway leading to a small chateau with many bullit holes.