After having made contact with the builder at Christmas, we though we would keep the pressure on by visiting again fairly quickly.

As we now have a car we decided we would drive to Stansted airport, relieving Pat and Geoff of the responsibily for mobilising ground forces at the London end. Thus, 4.00am on Saturday saw us driving the M25 in our new, comfortable, car.

We arrived at Poitiers at 9.00, picked up the hire car (a Renault Clio this week) and by 9.20 were in Castorama, the hardware store on the southern outskirts of town, before heading to Preuilly. We stopped at Bonneuil-Matours to inspect the Saturday marche (quite good) and buy a mid morning snack, then hot-footed it to Preuilly to visit the bank.
The reason for the bank visit was quite simple - we had ordered a cheque book at Christmas and it had never arrived in the post. The reason for this became obvious when the guy at bank took it out of the drawer behind the counter. This was strange, as we agreed that we HAD asked the bank to post it to us, and thought that request had been understood.

We dropped the signed quote for the roofworks back with M.Galland (I had written his phone number down wrong, so we couldnt arrange to meet) and then spent the rest of the day trying to get into the house as the door jamb had moved slightly, and we couldn't unlock the door. This meant a climb up 3 metres of stone wall to enter the barn, then a 3 metre drop the other side. Luckily, I still have some of my Captain Action skills left, which surprised me almost as much as it surprised Susan.

The rest of the weekend was taken up consolidating the work we had done in the garden (and finding another cobbled courtyard surface in the process)and walking Preuilly with the book of old photos, taking modern equivalents. Amazingly, little has changed! 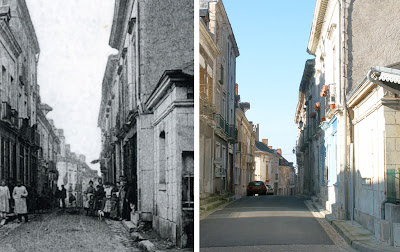 We left after lunchtime (having had a salad and glass of red wine at l'Image) and took photos of the late winter colours of the Claise/Gartempe/Vienne river valleys on our way back to Poitiers. 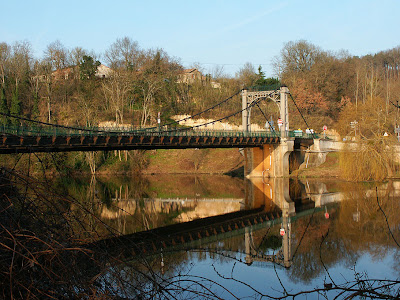 This was quite a fun little trip, with 2 days away, and back in London in time for Sunday dinner.