We left Roux at 8.30am and called into La Roche Posay to buy breakfast at the boulangerie. We then progressed to Chatellerault, looking for a dechetterie to deposit our recycling at.

Having filled the car at E. Leclerc in Chatellerault we took the reverse route to the one we had used coming down - Tours, Le Mans, Rouen, Boulogne. The only exception was an unplanned tour through the middle of Rouen at lunchtime.

Arriving at Boulogne at 4.00 and with plenty of time before our 6.45 sailing, we filled the car with fuel again (it is 25% cheaper in France than in the UK) and did some shopping for the coming week. Luckily (although it did take some planning) we had bought an Esky (coolbox)with us, so we were able to buy milk and dairy goods as well. 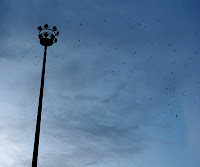 The terminal at Boulogne is a dreary place - not a good advertisment for Britain at all. The coffee is expensive (and rubbish ) and the surrounds are just totally motorway servies dull. We entertained ourselves by watching the starlings roosting on a lighting pylon. 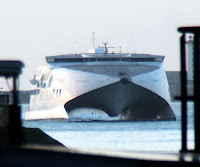 Eventually the boat arrived, and having parked the car we proceeded to the outside deck to watch France recede. The sky was mean and moody, but in the end the cold and rain drove us inside. Driving on the left hand side of the road in a left hand drive car one we arrived in Dover presented no great horrors. This was a relief, because I had fears it was all going to be too complicated for a tired brain. 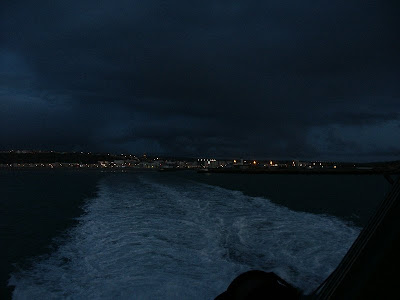