The paperwork for the car is completed

Having received and printed the Certificat de Cession at the Library we hoped we now had all the documents needed to transfer the car into our names. This meant a trip back to Loches and the sous-prefecture.

Miracle of miracles!! The paperwork was OK, and having relieved us of our cheque for 187Euros we were on our way. We don't have the new registration number yet (that will be posted to us). Maybe I should explain that; cars are registered within a department and show the department number on the numberplate, so that when the car changes department the registration number changes. Our car was last registered in Moselle (57) and we will be living in Indre et Loire (37) so we have to have a new numberplate made. This will all change in 2008. 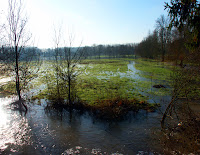 Feeling relieved, I celebrated by taking some photos of the watermeadows near the prefecture, flooded where the Indre had burst it's banks. This was most spectacular with the sun glinting on the pools of water. I believe it may have rained recently..........

Having acheived so much on Sunday, we had decided to try paint the walls of a small storeroom that is at the end of the entry passage of the granary. We went to M. Bricolage (leClerc the supermarche's hardware store). There we not only bought paint and rollers, but we found a 120 litre heavy duty plastic storage bin. We decided that this would be perfect for storing sleeping bags and airbeds and the like, so we bought it and loaded it into the car (having rearraged the seating accordingly). We popped into LeClerc's to buy lunch stuff, then shot off home.

Susan had been doing little practice drives around Boussay and Roux, and we decided that it was time she tried her driving on a more main road, so after Perusson she sat in the driver's seat and drove us for about 10km, managing not to cause any lasting damage to anything (psyches included). This is good, and we hope it's the start of sharing the driving.

Arriving at Preuilly we opened all the windows and got stuck straight into the painting. It went quite well, even though our preparation left a lot to be desired. This paint job is just to brighten up a room to give us somewhere nice to take refuge, change into work clothes, rather than the final effort. Christophe from l'Image called around to look at the garden, because he said he would find us someone who could turn the garden over with a tractor. He agreed that it would work with a small tractor, and he would let us know.

We then had lunch, finishing just before M.Bertucelli the plombier arrived. He had a look at the plumbing and agreed it was all a bit rubbish, and agreed to give us a quote (or devis - estimate) for installing a WC, and a cold water tap inside and ourside.

Email ThisBlogThis!Share to TwitterShare to FacebookShare to Pinterest
Labels: Loches and area, The Car and Driving, Towns and Villages near Preuilly