Friday was our "Confronting French Government Day", something neither of us was particularly looking forwards to. We had to take all the paperwork for the car to the sous-prefecture in Loches to change the car into our name.

After driving around a bit looking for the office (it was almost hidden) we fronted with all our various bits of paper to a young woman who took it all, then started shaking her head and tutting. We had the receipt that showed that the dealer had sold the car to us - we didn't have a piece of paper saying the previous owner had sold the car to the dealer. This was a problem, as everything must be done by the book - the French take proof of ownership terribly seriously. An added complication is that you only have 1 month from the date of sale - and our month is up in a week.

Our second task of the day was buying bicycles. LeClerc (the supermarche) had mens and womens bikes advertised for 60Euros. This seemed like a bargain to us, but unfortunately we weren't the only people thinking that way and they were sold out.

As it was by now almost lunchtime, we took a minute or two (about 30, actually) to have a plat du jour of sea bass in a mustard sauce and a pot of wine. A very nice - but quick - meal for just under 20 Euros. This slightly numbed the worry of the transfer, and fortified us for dealing with the internet in French.

Most of the libraries in Indre et Loire have public internet access. We paid for an hour, the lady scanned our document and we sent it off to the dealer. We rang to say it was sent, and were told it would be done as soon as possible. We waited the hour, but no reply. Susan rang again and we were assured that it would be done before the end of the day and he would phone when it was done. By now I was getting twitchy, and determined the day wouldn't be a complete waste, so we went off looking for cheap bikes. This didnt work, so at about 3.00 we set off home. 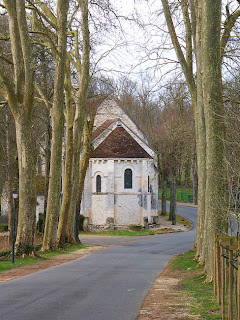 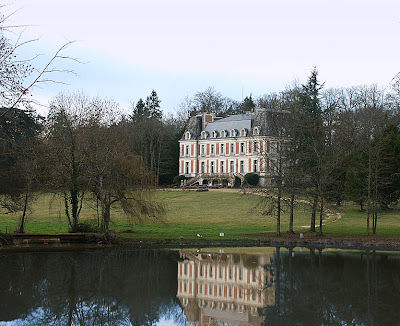 It was lovely weather, so we took a scenic route, finding a really pretty little hamlet called Chanceaux pres Loches, complete with chateau behind a lake, a rushing little stream, and a painted chapel. Tres joli!

We stopped at Preuilly library to check out their internet times, and luckily one of their three open days a week is Saturday, so hopefully tomorrow...........

Email ThisBlogThis!Share to TwitterShare to FacebookShare to Pinterest
Labels: Churches, Loches and area, Pictures of Chateaux, The Car and Driving, Towns and Villages near Preuilly

How lovely Simon and Susan! It is obvious that you both have adapted extraordinarily well to your adopted country. What a charming village! Don and I were hoping you both would join us for a drink in a few weeks. We will be arriving in Paris on March 11th, staying until the 16th, before moving on to Brussels and Amsterdam. It would be delightful to see you again. I trust you still have our number. Looking forward to hearing from you, and thank you for the entertaining blog. It's fabulous!