We have been living in London for almost 10 years. For most of that time we have lived close to a station, and contrary to what the newspapers would have you believe the trains arent that bad most the time. This means that most days, a car is superfluous to our needs. After a brief period of car ownership in 1997/8 (and most of that time, the car sat out in the street rusting away and not being used) we became public transport converts. Moving to the French countryside means that we will need to become car owners again.

This has not been without trauma.

The first nasty shock was the price of cars. In the UK we often hear about "rip off Britain" where cars cost SO much more than in Europe. I am here to say that, like most tabloid newspaper led stories, this is made up nonsense (how polite was that!). Used cars in the UK are cheap. Incredibly cheap. This is because although there isn't a square inch of road not already occupied by a traffic jam, the population of the UK have recently discovered the joys of motoring, and by golly, they are going to have a new car to do it in. Thus they replace their cars every 2 or 3 years, and you can buy a 5 year old car for about 10% of it's original price.

In Europe (and especially France), people keep their cars for about 7 years. This means that there are only 1/3 the number of used cars available, and hence they are more expensive. They also do a lot more miles.

Because we believed what we had read in the newspapers and seen on the TV, our original budget for a car has had to be increased - by 200% - in order to get a used car less than 10 years old. Because we are currently in the UK and our French language skills still don't cover cars we decided to buy a car here, and get it all sorted before we moved. We KNEW this would a slightly more expensive option, but it's still a bit of a shock.

After months of research reading road tests, used car reviews, looking at pictures and trying to work out what the car actually had to do, we decided we need a small MPV. First thought was a Renault Espace, but although they dont get body rust (plastic body, you see), they loose their shine and look faded and very used very quickly. As we intend collecting people from the Station this may not make a good initial impression. Susan was convinced we didnt want a car that was a "poverty indicator", therefore 10 year old Mercedes diesels are out, although they are bulletproof.

Once we actually started looking at cars "in the metal" it quickly became obvious that, notwithstanding their slightly dodgy electrics, the Renault Megane Scenic was the car for us. A nice versatile layout inside, plenty of legroom, a turbo diesel engine (for added fuel economy) and not so big that we cant drive it through Preuilly or park it at our house.

We found just the car, had it checked by DEKRA (the "checking out a car before you buy it thing" company) and were quite excited about it. When the report arrived, it showed the turbo wasn't working. This meant that instead of costing us £179, the report saved us about £700. It soon became obvious that any car we looked at in our preferred price range was going to need work, and maybe we would be better off spending more on a car and buying one with less problems.

We finally settled on a 1999 Renault Megane Scenic which came with a good report. It has air-conditioning, a CD player, loads of legroom and seems quite solid. We have it booked in to have the cam-belt changed later this week (It's important, if the cam belt goes the engine self destructs and we are driving to France next week. 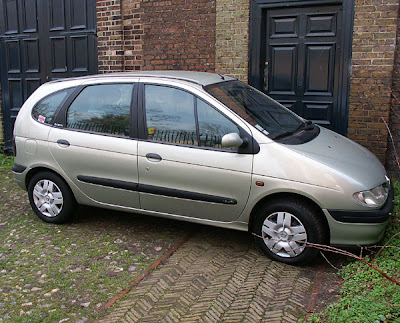 While we are in France we will be doing the change of ownership thing at the sous-prefecture in Loches. We will then have a local numberplate, and be indistinguishable from other local people - most of whom also seem to drive Renaults.

It should also be said that insuring a car is more expensive in France than it is in the UK. This was another shock, but like most shocks, one that we have to live with!

So what do you have to say about the Mégane Scénic a few years later? Has it been a good car?

Ken. It's been super, really - we have done a shade under 50,000km (at 5.6l/100km) since we bought it. The only real work was having the cam-bely replaced when we first bought it )as a preventative measure) then the work in August this year on the fanbelt/brakes.

No other serious issues, and it just passed it's CT for another 2 years, with not even one advisory.

Of course, it's a 10 year old car, so it's not perfect - issues with inside lights not working properly, and the heater only won on full or not at all, but nothing to get all het up about

"Susan was convinced we didn't want a car that was a "poverty indicator", therefore 10 year old Mercedes diesels are out, although they are bulletproof".....
so that's what you think of poor old Gaspode!!
;-)

I'm afraid I've known too many people living in genteel poverty with an aged Mercedes. My personal experience of old Mercs is that they are big and uncomfortable.