We are now French Homeowners!!

This happened in November (the 21st, trivia fans).

We flew to Limoges with Ryanair and booked to stay at L'Image (previously Grande Hotel L'Image) in Preuilly sur Claise. The drive was pleasant enough, only marred by some roadworks and the accompanying confusing signage around Bellac. This meant we took a slightly more scenic but only marginally longer route than we anticipated.

After driving through St Savin and Angles sur Anglin we stopped at Bricomarche, the DIY/builder's merchant in Yzeures-sur-Creuse. Here we did the first of what will no doubt be many wanders around French hardware shops looking confused. We bought a set of loppers for the garden and gardening gloves for Simon (his first ever pair). This was paid for using our new Credit Agricole Debit Card, making us feel really Frenchified. We then popped in to Intermarche, the supermarket next door to buy bottled water (essential until we get some plumbing) and various bits and bobs. Intermarche and Bricomarche are the siamese twins of the retail business - where there is one, the other is almost co-joined. They quite often have a petrol pump or two, which are 24 hours if you have a French Credit or Debit Card. (Like we do, in case you have forgotten!). On the way out of Yzeures we called in to la Promenade, the restaurant in we had visited in September, to see if we could book for dinner. Unfortunately they were complet, which meant we ate at Auberge St. Nicholas in Preuilly instead.

We then took ourselves to our local winery - Domaine de Ris - in Bossay sur Claise, just 4km down the road from Preuilly. Here we bought a Chateau Cardboard Rouge, 5 litres for 22 Euros. Although we didnt have glasses or cups with us on this trip, subsequent tastings have confirmed that this is a nice and pleasant, if somewhat lightweight, quaffer. When I have a long quiet afternoon to spare I will sample all their wines (in the interests on science, naturally) and post my findings.

L'Image is a really nice hotel. Family owned and run (at least 2 generations, with a 3rd in the wings) they also have a restaurant which is a good safe bet. They are English speaking, but willing to help with our French pronunciation (and no doubt, when such things matter, grammar). The rooms are a bit basic, but clean and comfortable. No TV, which is OK, because except for the Meteo and the occasional circus or wildlife program, French TV is pants. That is now my official opinion.

On Sunday we went to Fontevraud. That evening we went to a restaurant new to us, the "Chez Grand Ma" in Le Grand Pressigny, for a quiet, but very pleasant meal, accompanied by the new year's beaujolais.

Monday morning was grey and damp, and we were both suffering from Susan having spent the night coughing. The owners of the hotel were sufficiently worried about Susan's health to phone their sister in law, who not only works cleaning the hotel and serving tables when it's busy, but is the Pharmacist's assistant. She bought in some throat spay/anti cough stuff which is "perfectly disgusting", but which appeared to make a slight difference. While that was happening I popped down to the Maison de la Presse (newsagent and bookshop) and bought "Memoire en Images Preuilly-Sur-Claise", a book of old photos of the village and it's surrounds. Unfortunately there is no photo of our house in there, but there are some great pictures.

We then walked to the Notaire's office to sign the papers and (figuratively, anyway) hand over the money, the transfer of money having been credited to the Notaire's bank account from Australia the week before. Surprisingly, the transfer was quite turmoil free. All the legal stuff like identifying ourselves and talking about insurance and local tax was accomplished in two languages and hoarse whispers, Susan's voice being just about disappeared by this stage. 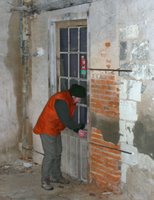 Ten minutes later Susan had the keys to her new house. We went to the house for the ceremonial opening of the door, and also to read the meters to send off a final reading to the various utilities companies. We also met with some builders to get a quote to have the roof fixed. This is the first move in what will no doubt be "the saga of the roof". Still - we aren't catastrophising about it (yet). At some stage the whole tale will be told, but at the moment neither of us has the strength.

After a small lunch at l'Image we did our first work on the house, starting to clear the garden. We made some inroads into the brambles and some self sewn elder trees, and cut back the ivy to as high as we could reach. This was a couple of hours of hot sweaty work in the drizzle, something that (no doubt) didnt help Susan's throat or cough. We made a mess of the garden, which is only to be expected - it will take a number of visits to continue clearing before we can say it is clear enough to start making it looked cared for. Having said that, we are pleased at what we did achieve. 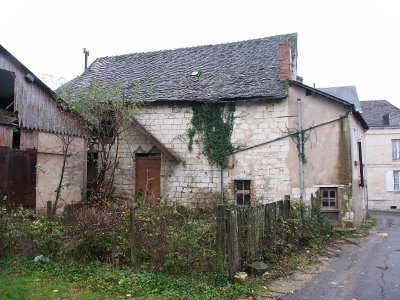 We had the full blown three course dinner at l'Image that evening, which was far too much food, both of us being dog tied. We would have been happy with the plat du jour, but we are still at the stage where we have to make the most (gastronomically) of being in France. Still - the wine was nice, a half bottle of Muscadet (the name of which I didn't note).

Next morning was a case of climb into the car and drive to Limoges without getting lost - which we almost, but scenically didnt, manage.

Email ThisBlogThis!Share to TwitterShare to FacebookShare to Pinterest
Labels: Buying a house, Our house in Preuilly