A whole week in Preuilly

We decided to spend Christmas as close to our new home as possible, so we rented a gite (through Gites de France) in Boussay for the week.

The flight for Poitiers leaves Stansted at 6.45am, which means having to be at the airport well before decent people are normally up and out of bed. Luckily, Uncle Geoff and Aunty Pat came to the rescue, offering us a lift to and from the airport. What champions! This was especially needed as we each had a suitcase full of clothing we intended leaving in Preuilly, as well as plenty of winter woollies.

Arriving at Poitiers in the fog the pilot decided (somewhat wisely, we think) that as he couldn't actually see the runway he wouldn't land. This meant a diversion to Limoges. At least we managed to leave the ground in England - this was the week that all European flights from Heathrow were cancelled due to fog. 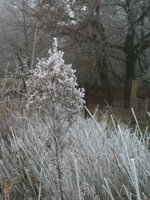 At Limoges we decided that instead of waiting for the coach that Ryanair were going to take us to Poitiers on, I would see if we could change our car hire and drive to Preuilly. Luckily, the guy at Limoges airport Hertz is on the ball, speaks good English, and is efficient - and luckily we managed to get the last car he had available. Thus we left Limoges on a clear but very frosty day, to see if we could manage to find a marche and do our shopping before arriving at the gite.

Once again, however, roadworks, lack of familiarity with the road signs, and just bad luck had us in St Savin at 12.30, without any shopping but with an appreciation of the minor roads of the upper Vienne. As it was lunchtime, we had lunch - Pizza and Badoit water, followed by coffee. We then drove to Yzeures to shop at the supermarket.

WHAT TREASURES!! Along with vegetables, fruit and cleaning stuff and the staple goods for the beginnings of a larder, we bought Pintarde (Guinea fowl) and a box of 36 Oysters. Amazingly, the shop cost us little more than a week's groceries in the UK. Happy, we set off to La Promenade (the restaurant we ate at in September) to book for dinner. This time, they were closed for their annual holidays - that's twice we have tried in vain to eat there again. Maybe next time.

We arrived at the gite (in a hamlet called Roux) at about 6.00pm - just in time to light the open log fire and warm up. A bowl full of oysters (freshly opened) and a baguette, a circus on TV, and we were happy chappies. 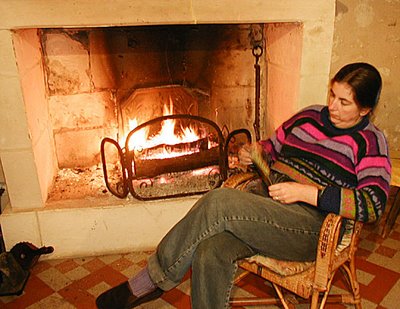 Next morning we decided to have a treat for breakfast - oysters grilled with a sliver of saucisson atop them, followed by preserved fruit. We thought a shopping trip in Loches might be a good idea, just to see if they have a Christmas market on Christmas eve. They don't, but we did have a pleasant (if somewhat cold) stroll around town, buying a bottle of Domaine de Ris Cremant - their ch@mpagne style wine in a small supermarket. We are amazed to see how much local produce is available in the supermarkets, actually. Wine, cheese, meat, vegetables - it appears that if it is grown locally, it gets precedence on the supermarket shelves. There is a lesson there for a lot of UK retailers. We checked out all the supermarkets in Loches (there are 4) to see just what is available, and the prices thereof. We also bought ourselves a pair of slippers each - tiled floors in -7c temperatures can be a bit nippy. 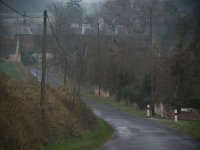 That afternoon we strolled from the gite to Boussay, a matter of 2 or 3 km each way, revelling in the peace and quiet. At one stage we stopped and listened, and could hear absolutely no man made (or man originated) sounds except for our own breath. Magic. We happened to see the world's strangest dog on that walk, maybe a labrador corgi cross - the unfortunate thing being it was a labrador's body on a corgi's legs. In order to preserve it's last remaining dignity, we didn't take a photo. I wish now that we weren't so sensitive.

On Christmas day Susan was unwell, so she spent the day in bed, and I spent it trying to find something on French free to air TV that was worth watching. At about 10.00pm I gave up and went to bed.

On Tuesday the 26th we had a first big stuff buying day. We drove to Castorama in Poitiers via Chatelllerault, checking out all the furnishing and hardware stores on the way. We had decided on Castorama as their website is comprehensive, and we were able to download the webpages showing what we wanted to buy. Thus we knew what stuff is called in French and how much is should cost. (Tricky, eh......). We bought a large tin trunk, a small hoe/pick, a large water bottle and a bow saw, as well as numerous small items. As we had an appointment at the bank at 2.00pm, we left at about midday, stopping for lunch at a small bar in Bonneuil-Matours. We had soup, andouillette and potatoes au gratin, followed by (for Simon, anyway) iles flottante. All this was served with a pichet of wine - for 11Euros. Bargain!

The appointment at the bank was to sort out the mystery of how to use the chequebook. It turns out that we didn't have a chequebook, but a paying in book. Once we realised this we ordered a chequebook, and managed to convince Credit-Agricole that I was of sufficient standing to be allowed to open a bank account. It was either that - or the fact we had transferred the balance of the money from the sale of Susan's house in Australia. As Susan had been unwell Christmas day, we still had our Pintarde to eat, so when we left the bank we went back to the gite, and had Christmas dinner a day late. 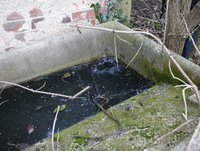 The 27th was gardening day - lots of hacking and slashing and piling up of tree cuttings was done. Even though it was very cold, we were soon in shirt sleeves. The house has a concrete laundry trough in the back garden, and the water in it had frozen to a thickness of about 4cm.

On the 28th we drove through amazing hoar frost to the Maison du Parc in Le Parc naturel régional de la Brenne, While we were there we were lucky enough to run into Tony Williams, a British born naturalist who has lived and worked in the Brenne for 20 years. After an interesting chat, we had a walk around some of the seasonally very white - and very cold - lakes which dot the area. The frost covered oak woods were very picturesque, and surprisingly full of birds. 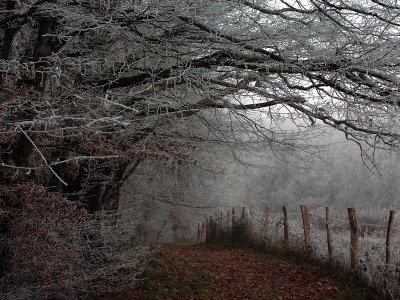 To warm up, we drove to Le Blanc for lunch. Again this was very reasonably priced, and a very pleasant interlude. We then commenced some motoring based sightseeing, it being too cold to spend much time out of the car. Amongst the sights seen were:
the mill at le blanc, and a cold buzzard by the road 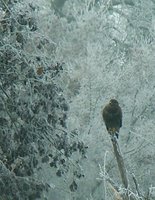 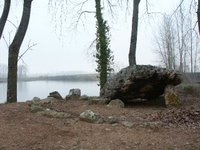 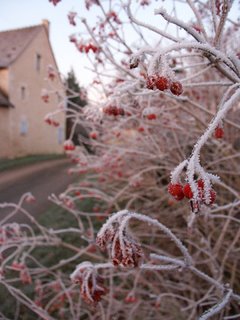 On Friday, we met with another roofer (saga of the roof, part two, out soon......). Before that though, I managed to take some rather pleasing photos. One of the advantages of that part of France is the opportunity to take photos of sunrise after breakfast. Very civilised. As you can see however, also slightly cold. You can see our gite to the left of the frozen berries. 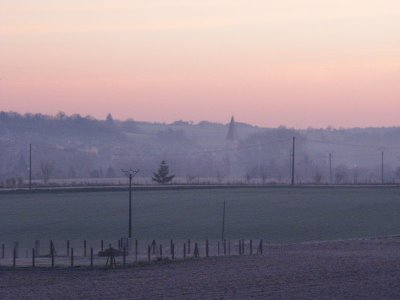 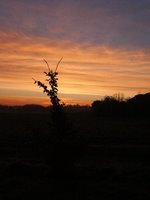 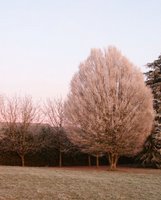 A little more gardening on Friday afternoon left the house looking a lot neater than when we had first seen it, and then all we had left to do was clean the gite in readiness for an early morning drive to the airport in Poitiers. 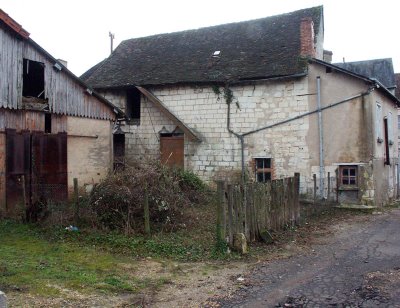 Email ThisBlogThis!Share to TwitterShare to FacebookShare to Pinterest
Labels: Boussay, Our house in Preuilly, Pictures of Preuilly, Prehistory, Roofing, the Brenne, Towns and Villages near Preuilly, Winter

hi, i'm starting at the beginning here and reading all the way through. your photos and vegetable notes are fabulous...i jsoi from, i think, ken broadhurst's orchid post.

Thanks purejuice. I've seen you on Ken's blog a few times.
Susan