The Lime Kiln at Bellais

There are lime kilns everywhere in the Touraine [link] and the nearby areas of Poitou. Most of them are 19th century, and there is a whole collection of them on the Creuse and Vienne Rivers near Port de Piles and Les Ormes. 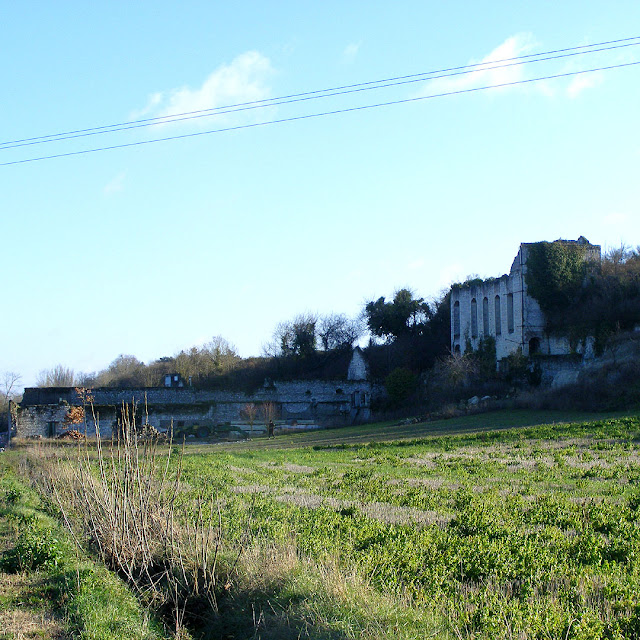 The most notorious I suppose was the one at the Vieux Port on the Vienne. In the early 1880s there were several landslides at the site. One of them resulted in 30 deaths, including the manager's wife, two daughters and young son. The limestone cliffs at the back of the site had been heavily mined, leaving enormous unsupported underground galleries on multiple levels that you could turn a wagon around in. In addition, water was pumped from the river to aid the extraction of limestone rubble and the rock was saturated. One fateful lunchtime the cliff came roaring down, destroying buildings in its wake, including the cantine and the manager's house, and burying anyone in the vicinity. The manager and his two teenaged sons were out in the yard and they survived. One son was catapulted into the river, the other managed to reach his father and they sheltered in a lean-to. Two men were hideously burnt when the kiln fires caused the fracking liquid to boil.

Extraction of limestone from the site at Bellais began in 1881. It is only 3 kilometres to the railway station at Port de Piles, so the stone was transported by rail. The factory was constructed in 1903 by the businessman Desfontaines, on the left bank of the Creuse. It made cement, lime and Portland cement (a new product specifically for reinforced concrete, such as had been recently used on the Arms Factory [link] bridge in Chatellerault in 1899 [link]). Desfontaines was authorised to take water from the river, which is very close, for the 100 horsepower steam engine. The extraction galleries were slightly above the level of the river, which meant they were not in danger of being flooded (something that had happened to limestone quarries just downstream in Port de Piles). 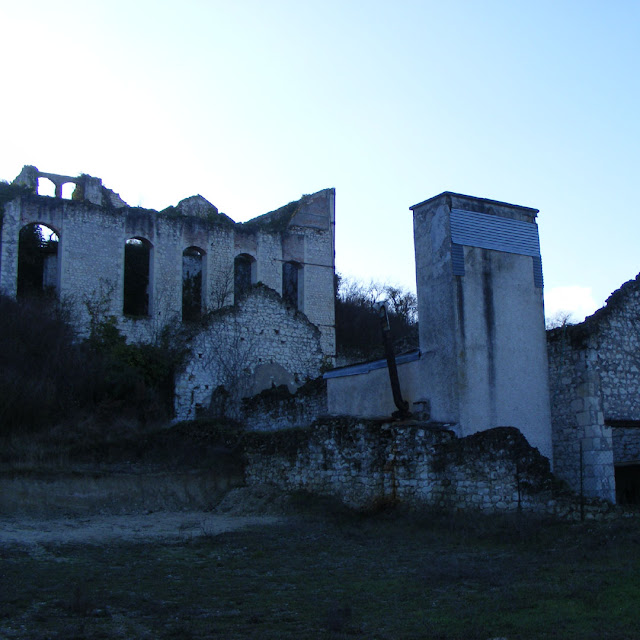 The square based kilns are quite visible today. They are built of refractory bricks and inside a constant low fire was maintained. Everything on the site was new and modern -- the steam engine, electric light, electric powered conveyor belt and rolling stock. Demountable rails allow wagons to transport the stone to the kilns, with an electric winch and a freight elevator. There was a reservoir for water and two entrances, one under the road which now runs along the front of the site. In 1910 there were about twenty employees. Lime and cement were sent to Paris, Bordeaux, Nantes and Brittany from the station at Port de Piles, changing at Chinon or Port Boulet, as well as going to Le Blanc and Argenton.

In 1911 Desfontaines' businesses failed and the lime kiln was put into administration. The kilns struggled on, producing less and less. When EDF built a weir downstream in 1920 the water in the river rose sufficiently to flood the extraction galleries. After winning a case against EDF for damages the factory was granted free electricity in perpetuity. The business finally ceased in 1936, and in the 1940s the buildings were used as a factory to manufacture wooden shoe soles.

We have driven past this site so many times and wondered what it was. There always seems to be some kind of activity there, someone doing some kind of work.
Fascinating post.