The Months of Lucas

Chenonceau is home to a number of fascinating tapestries. On the first floor, in the bedroom dedicated to Gabrielle d'Estrées the corners are hung with three rare 17th century Brussels tapestries that were part of a larger set known as the Months of Lucas. There must originally have been twelve, one for each month of the year, because Chenonceau own June, July and August. They depict the different typical rural activities for the months in question. In June it is shearing, in July hunting with falcons, and in August the harvest is being brought in and the harvesters paid. 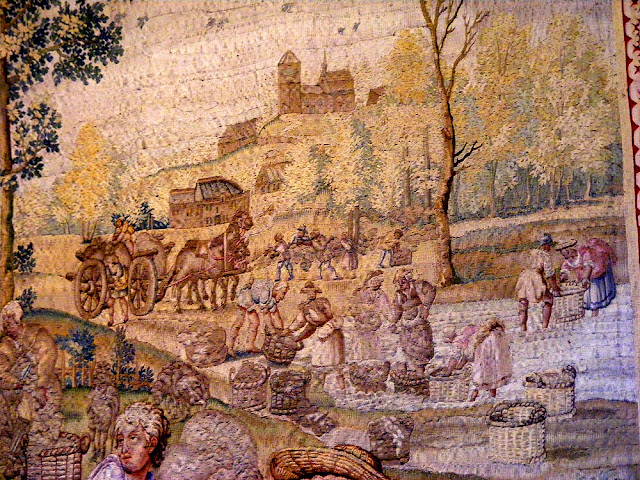 The cartoons for these tapestries are widely attributed to Albrecht Durer's friend, the Dutch artist Lucas van Leyden, but several sets of them were woven long after his death in 1533. This isn't in itself a problem in terms of the attribution, but most modern experts have doubts on other grounds. It seems likely that the 17th century French versions made at Gobelins in Paris were based on several artist's works, and sometimes enhanced by Gobelins themselves before weaving.


Detail of June, showing refreshments being delivered to the workers in the sheep fold. 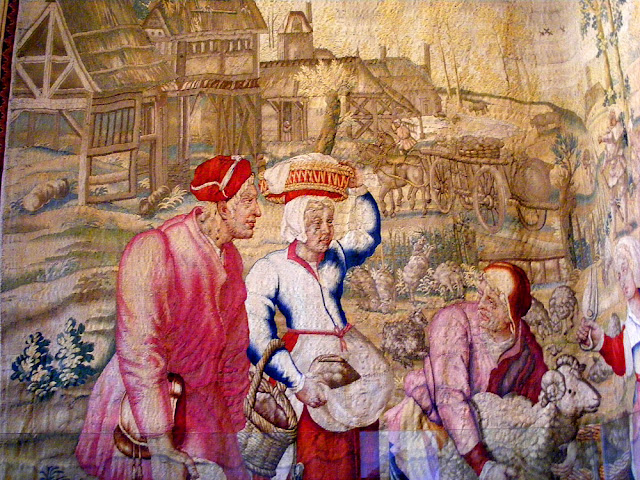 The earliest Lucas Months sets were woven in Brussels in 1535, and various workshops, including Gobelins, continued to produce them into the 18th century. More than one set of them has been destroyed, deliberately burned to recover the gold and silver thread in them. The Months were available to wealthy clients of Gobelins with a choice of different borders, and there were at least four sets made for high profile customers. 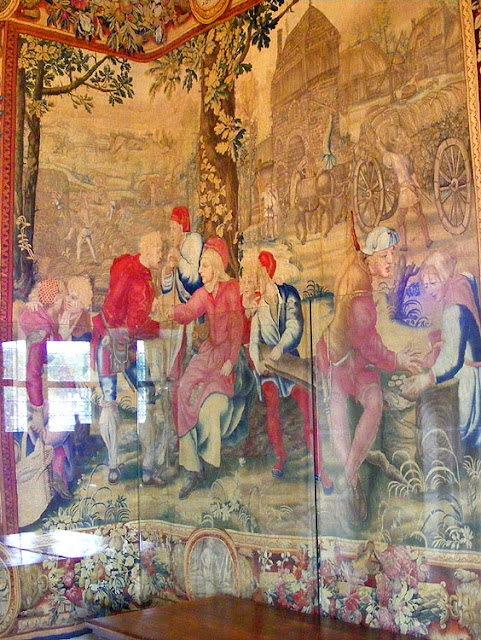 The detail shown in the tapestries is remarkable. We can see what ordinary people are wearing and how they are wearing it. Costume historians love this sort of tapestry because this sort of clothing rarely survives, so anyone studying it has to look to sources such as tapestries. Of course, the historian also has to know that the tapestry could date from 150 years after the fashion was current, but works like this are still useful.


The other thing to note about the activities portrayed is that all the shearers are women, an occupation that we would today regard as predominately a man's job. Of course, sheep were smaller in those days, but so were women, so I don't think that is the explanation. In one of the sections I have photographed you can see other women washing the fleeces, and the men are only involved in taking the final product away.


Women feature strongly in the August tapestry too. Here it is women paying the male harvesters. Only in the July tapestry is the single woman featured shown as something more delicate. She is aristocratic and possibly the person who commissioned the original set. She is out hunting with a falcon -- a nice lightweight bird for a lady. She has a male servant in close attendance and he is leading her horse. She is riding side saddle, so might struggle to control falcon and horse simultaneously, and is clearly not expected to go at more than a gentle amble.

I'm always in awe of the amount of meticulous work which has gone into such creations.

Sheila, I thought you were going to say the amount of meticulous work which goes into each blog post here. I learn so much reading Days on the Claise. There's nearly always something new to me and I'm grateful that Susan and Simon have such a wide range of interests.

Tapestry weaving is a terribly slow and skilfull business. It irks me greatly that there are companies selling reproductions of these tapestries for a couple of hundred euros. Of course they are not tapestries -- but the companies appear to be able to call their machine jacquard woven things 'tapestries'.

I second what Sheila and Carolyn said.