Technically, Tours and Saint Pierre des Corps are two separate municipalities, but they adjoin one another and the boundaries are not always clear. Traditionally Tours is the larger and more influentual city, bourgeois in outlook. Saint Pierre des Corps on the other hand, is a railway town, with strong Communist leanings. 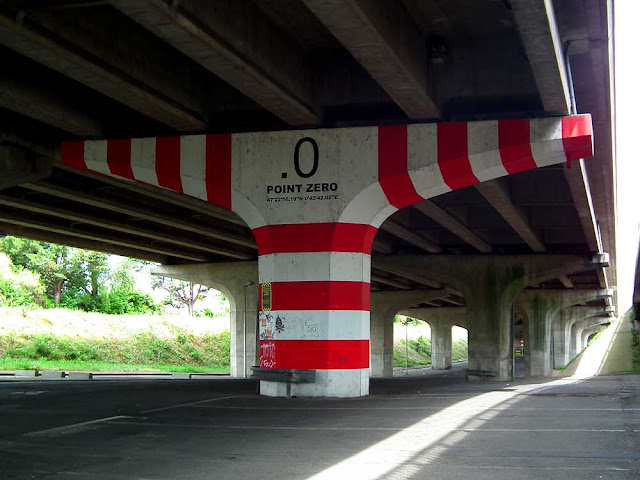 Under the A10 autoroute, between Tours and Saint Pierre des Corps, one of the pillars supporting the roadway is painted entirely red and white, with a black '0' in the middle. It is a symbolic representation of the reconciliation between the two municipalities, dating from 2009 and created by the Pôle des Arts Urbains (the Centre for Urban Arts). It's a slightly tongue in cheek attempt to acknowledge the genuinely felt division between the two places that the A10 emphasised by physically marking. The A10 itself follows the route of the old Canal du Duc de Berry, so the division, both physical and emotional, between the two communities is long established.


Some locals think it's rather fun, others think it's nonsense. Personally I'm inclined to be a fan. I like the way it is hidden in such an unexpected location, where only those taking the rat run under the autoroute will see it. We had no idea it was there -- we were in the area to photograph the water tower. Frankly I've seen public arts money spent to much less effect.

Email ThisBlogThis!Share to TwitterShare to FacebookShare to Pinterest
Labels: The Car and Driving, Tours

Fascinating! Do you know if the canal is still navigable?

Only by car :-) The canal was filled in decades ago and is now a road.