Hazel Leaf Roller in the Orchard

Ever since Kew botanist Kaz told me about Hazel Leaf Rollers I've wanted to see one. Well, I've finally succeeded, and it was in the orchard! They are just as weird a little beetle as I'd hoped. 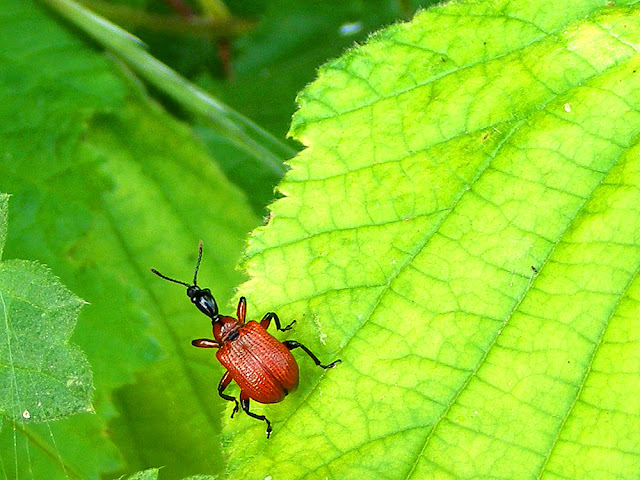 I was scattering 'wild' flower seeds along the laneway to the orchard, and right in front of me a red beetle with a black head landed on a hazel leaf. I promptly dropped a handful of crimson clover seeds in a pile on the ground and ran to get the camera. Luckily the little beast was still there when I returned a few seconds later. 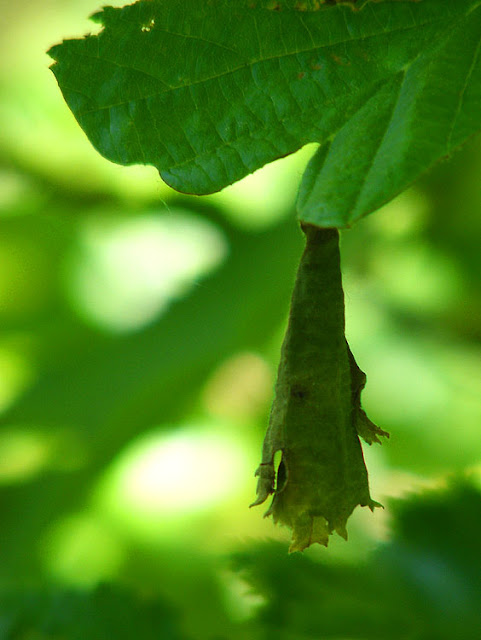 I assumed initially by its behaviour that it was a female looking for a suitable leaf to roll around its egg. Later, looking at the photos I decided it must have been male, with its little white velcro pads on the soles of its feet (all the better to grip the female with). It walked up and down the leaf it landed on, then moved to the next leaf, apparently checking carefully for something.  Now, after looking at other people's pictures where they've been lucky enough to capture a female cutting and rolling a leaf, I am back to thinking it was female, who also seem to have the velcro pads. It was still there minutes later after I felt I had sufficient photos and I got on with my seed scattering. Later I found a leaf cigar on another hazel in the orchard, so it looks like I have a breeding population.

Not yet seen a beetle... but I will look out for the "cigars"

Delightful little critter...made me laugh. The cigar is a clever work of art.

Interesting little fellow. Must have a good look at our hazel nut tree. Hope all is well Diane

You will be amazed how carefully you have to look.

Like a lot of weevil relatives, it has personality. The cigar in the photo isn't the neatest one I've seen.

It will probably take you several seasons before you spot one.