A day of three halves

Saturday dawned slowly – a grey overcast day with some quite heavy rain through the night. We were woken by the church bells at 8.00, the time we had agreed to have breakfast. Susan was suffering a sore throat (from having to do too much talking at her work annual conference, I suspect), but neither of us were feeling any effects from the accident the day before.

After breakfast we drove through Preuilly-sur-Claise to la Roche-Posay. We had checked out the house from the outside on Friday, and had arranged to pick up the keys in the afternoon, so we didn't stop. The market in Preuilly-sur-Claise looks to be very small and has only three or four stalls, which is a bit disappointing.
The Creuse River at la Roche Posay 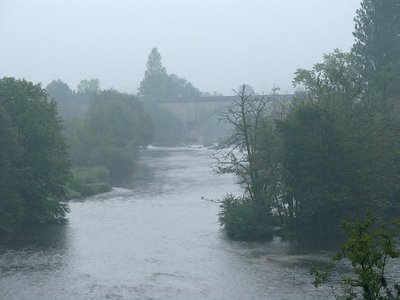 We went into la Roche Posay to do some sightseeing. It was just as busy as last time, but with the added attraction of a music festival. While we were there we took the opportunity to refill our water bottles with the local brew, which issues from a tap in the wall of the spa. It tastes OK, not really much in there when you consider how good it is supposed to be for you. It must be said however, that not only has the spilt water from the fountain turned the footpath black, it is also eating it away. Susan likes it though, so that's a saving on mineral water when we move to France.

We then drove on to Poitiers to exchange the car. It was raining really heavily in places, and misty in other places, with periods of bright sunshine. The Hertz agency was where I remembered it to be (opposite the station), but not where the lady on the phone from Hertz indicated it was. This meant we arrived at ten minutes into the lunch-hour and had to come back in two hours. This gave us an opportunity to check out the underground car-parks of Poitiers (and also the market and restaurants). The market looks extremely good, if not as picturesque as the market in Loches. Poitiers itself has been marked down as somewhere else to be explored more fully at some stage.

The new car was a Renault Megane six speed diesel. Why six gears when I rarely remember to use fifth?

We arrived at the Immobilier's in Preuilly to pick up the key to the house, where we realised that I had managed to leave the tape measure in the overhead storage unit in the Kangoo. Susan had wanted to measure the garden so she could start planning the vegetable plots. It doesnt really matter, because I can pace out a metre quite well.

When we got to the house (and after struggling with the 8 barrel lock on the front door) we were amazed to see how much junk has been cleared out. The floor in the front room was clear for the first time, and it is obvious that we will be retaining the tiles in there. They appear in great condition and will be a big feature of the house when we are finished. Unfortunately (once again) I forgot to take photos, so that is one for the next visit. While we were at the very top of the stairs we found proof that there are bats – they were flying around our head. Not very many, and we don't mind sharing some space with them as long as we can keep them (and the evidence of them) out of the house. Overall, the house still appears to be in not too bad a condition once we can get the roof sorted out.

After inspection the house one or two of our party (that would be Pat and Geoff then) were gagging for a cup of tea, so we went to La Roche Posay again, via Boussay this time. Cups of tea and coffee were located easily, and then thought turned to dinner. After a stroll around Roche Posay's restaurants (which all appear at first glance to be slightly disappointing) we decided to try le Promenade in Yzeures-sur-Creuse, which appears in the ever reliable Routard. If that turned out to be either too expensive or not appealing we would return to Roche Posay.

What a great find! We had the 20euro menu, 3 courses which offered amongst other things Charentais melon (with or without ham) or homemade terrine as entree, pork with grapes and butternut squash mash (really good, even though pumpkin is cattle food) or fish for main, and either crème caramel or fresh fruit of the season for desert. This restaurant is quite brilliant, the ingredients fresh and interesting and all put together in really imaginative but tasty combinations. We will be returning here.

Hi Susan & Simon,
I was wondering what made you choose this part of France? I have been looking elsewhere myself but have hit on a house I like the look of in Yzeures sur Creuse and don't know much about the area. La Roche Posay I can't say I like the look of too much - a bit prim and proper. Perhaps I am wrong.
Have enjoyed reading through your blog which I came across by accident.
Hope it is all working out for you.....
Jackie