Having found a house we thought we wanted, it was time to crank that part of the brain marked "sensible" into action Susan rang the surveyor Gerard Ball and arranged for him to contact the agent and arrange a time to do the inspection. As usual with the immobilier, many messages were left on the answering machine and many emails sent, but no reply was forthcoming. Eventually (on Thursday morning) we received a call from Gerard to say he had managed to call the agent during the 15 minutes that week he was in the office and had arranged an inspection for that Friday. We were sort of expecting this, (or hoping for it) and had planned for the possibility of a quick trip - our bags were packed, we just didn't know when we were going to be using them.

I rang Ryanair and booked 2 tickets from Stanstead to Poitiers leaving the same day, and coming back on Friday. (Make note to self; avoid doing this - it is VERY expensive). I also booked a car, locked the door, and ran for the train.

We arrived in Poitiers on time (hooray!) and an hour later, after a drive through beautiful rolling countryside and woodlands we were in Preuilly-sur-Claise. This is a so much better way of travelling to that part of France, more relaxing, usually no more expensive, and you save almost a day of driving.

After dinner at our hotel (the Auberge St Nicolas) we went for a walk in the dusk. The evening was pleasantly warm, and we were delighted to discover that there is a colony of bats that live around the chateau. The laneway next to the chateau is one of those narrow roads where the trees either side meet to make a green tunnel, and the bats were hunting insects up and down the lane, flying close enough to make us (well - me, anyway) flinch. It reinforced the feeling that we were lucky to have discovered this town, and made us even more enthusiastic about moving there.
Chateau Du Lion, Preuilly-sur-Claise 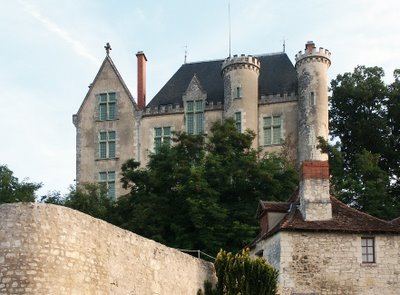 Next morning we met Gerard at the Immobilier's, and we walked to the house to have a proper look at it. It was only at this stage that I realised how jaded I had become looking at real estate, because the house was so much bigger than I remembered from the previous weekend. It was also a lot more full of junk than I remembered. Soon we were up to our necks in dust and grime, and Gerard had the tape measure out. 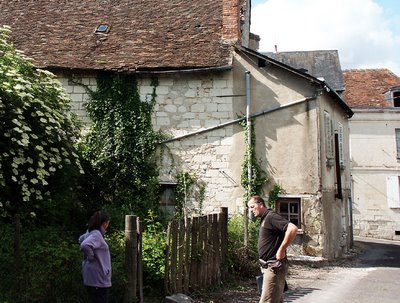 I had been feeling off colour for the whole of the trip, and all of a sudden my stomach rebelled. This required a trip to the Public Toilets at the Hotel de Ville, which just happen to be a la turque(or as Gerard put it, "pitch and putt"). Not the place to be in an emergency. It has to be said though that for puiblic toilets, especially a la turque ones, they are exceptionally clean.

The survey took about 6 hours, during which time I occupied myself with visiting the public toilets and taking photos of everything to do with the house. We also had a visit from someone we suspect may be one of the neighbourhood "characters", an elderly gentlemen who has obviously put on weight recently.The evidence for this was his trousers, which were held up by a piece of string around the waist, leaving a 3 or 4 inch gap where the fly would normally be in a pair of trousers. Luckily, his dignity was maintained by his shirt which must have been tucked into his socks............... He told us that the previous owners had last lived in the house about 35 years ago, and they they had stored deux chevaux in the granary. I though he meant two horses, but Gerard took it to mean a Citroen 2CV. Either way, it was a good effort getting it/them in there, as the granary floor is almost a metre off the ground.

We also met an elderly lady who lives nearby, who had arrived to cut some peony flowers from a bush growing out the back of the house. We chatted and agreed that yes, it was cold for June. It appears that most of the population of Preuilly is fairly ancient, so maybe Susan and I will be known as the "Young Australians". Time will tell.

Eventually we HAD to leave Preuilly, otherwise we would have missed our very expensive flight back to Stanstead.

Gerard has been brilliant in all of this. He spent ages chasing down the agent, and then spoke to the agent on our behalf when we came to make an offer. His report is exhaustive, and accompanied by a CD's worth of Photos. Although the report says that the work to be done is a lot more expensive that we expected, when it is laid out on paper the amount of work feels a lot less intimidating than it could have been. Just having the report set down in writing like it is gives me faith that we can really make this thing work.

Email ThisBlogThis!Share to TwitterShare to FacebookShare to Pinterest
Labels: Buying a house, Our house in Preuilly, Pictures of Chateaux, Pictures of Preuilly