Well! What a weekend we have had. So much action I've decided to split the weekend into days.

The day we signed the Compromis we decided that we would return in about 6 weeks to just give things a bit of a push along. This time we invited my uncle and aunt (who live in London) to come with us so they could in turn give a rapturous report to my parents. We book into Tours (Loire Valley Airport) and out of Poitiers flying with Ryanair. No more 5 hour drive around Paris!!

Pat and Geoff picked us up at 7.00 because we were a bit concerned about traffic on the M25 (London's circular parking lot) and wanted to get to the airport nice and early. Geoff isn't a fan of take off, so needs a seat next to Pat. We were first in line at the Ryanair queuing system (something designed to take the last remaining vestiges of romance out of travel), so we were able to get exit row seats. I don't like Ryanair much, but they do fly to where we need to go.

We arrived at Tours almost on time, and while Susan and the others were getting our checked luggage (due to the ridiculous cabin luggage laws at the moment we had to do it) I picked up the car. It was a nice new Renault Kangoo in metallic red, just perfect for the 4 of us and our gear. Because the car pick up procedure was so quick, I was able to be at the pick up area by the time they emerged. This was a good thing, because it was raining, and continued to rain on and off for the next 36 hours.

Unfortunately, we do not have a picture of the car, because 15Km after picking it up we were driving along a winding country road a woman driving towards us decided that the piece of road I was on looked better than where she should have been. She gave us a smack in the back drivers side door, causing quite a dent (and breaking the hub cap cover). She was travelling fast enough to continue along our side of the road and damage the car behind us too. Susan sorted out the paperwork (which was surprisingly easy) while I had a little sit down – I could hear the words being said, but even when people were speaking English they made no sense. Unlike in England,(where it appears obligatory to leave the cars strewn across the road while you have an argument), in France every vehicle carries a crash report form which everyone completes then signs, and the work is done. Because ours was a hire car, however, we had to return the car to the agency and replace it. This we achieved on Saturday afternoon, after trying unsuccessfully a couple of times, and having made a bundle of phone calls. 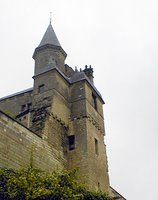 We were booked into a hotel in Le Grand Pressigny because our usual hotel is closed for their annual holidays. We checked in, made a reservation for dinner, then had a stroll around town. The rain was light enough not to be a worry, so we wandered down to the river (the Aigronne, a tributary of the Claise) and stood in the shelter of the lavoire, the reconstructed ancient public laundry house. We watched the river (very therapeutic) and looked for wildlife before strolling in the mist around the vegetable gardens and up to the chateau. From there, we arrived back at the hotel just in time for dinner. A nice relaxed meal (home made terrine, stuffed chicken leg, followed by chocolate mousse, with rather a nice half bottle of Rose) and I was ready to sleep the sleep of the just.

The roofs of le Grand Pressigny 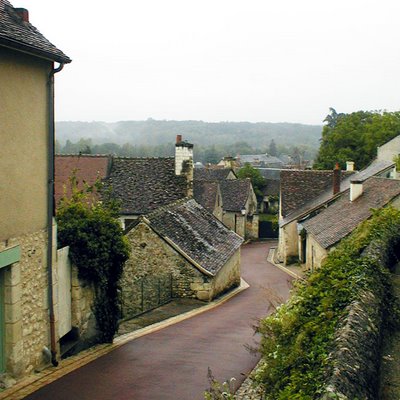 Email ThisBlogThis!Share to TwitterShare to FacebookShare to Pinterest
Labels: le Grand Pressigny, Pictures of Chateaux, The Car and Driving, Towns and Villages near Preuilly