As soon as Susan arrived back in the UK, I started planning the next trip to France. This was going to be undertaken with military precision.

Because the fares were cheaper, I decided we would fly into Paris (for the last time) and drive to Loches. The hotel was booked for the Saturday and Sunday night, but I decided to leave the Friday night to chance, because we didnt know how far we would drive that evening. The flight arrived in Paris at 9.15pm, and by midnight we were in Blois looking for a hotel. At 2.15am we were still in Blois looking for a hotel, because of the French custom of "faire le pont" - taking the Friday off if Thursday is a public holiday. Every hotel was full. I now know the back streets of Blois like a local. We eventually found a bed in possibly the most expensive motel in town. So much for military precision, then.

Saturday morning found us on the road to Loches. Once again we visited the market, which, if anything, is even busier on a Saturday than on Wednesday. Then it was time for a quiet lunch, and off to the Immobilier's for our first visit. 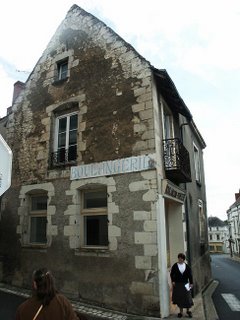 The place we had travelled to see was an old boulangerie in Preuilly-sur-Claise. Right on the edge of the village on the main road, it was almost the first building we saw. An amazing place with many features, including the garden which had been converted into a room of over 110 square metres. That room is almost as big as the house I grew up in, which is a staggering thought. It also had a communal staircase (a stone spiral staircase possibly 500 years old) and a cellar over 1000 years old. The rooms were all higgledy piggledy, and appeared to have grown where they landed. So tempting, but at the same time a real challenge as far as what to do with all that space! It also had no garden except for about 10 metres of shared courtyard. Needless to say we were sorely tempted.

We returned to Loches with the agent. As it was still mid afternoon, we went for a drive around Loches and environs, visiting Loche sur Indrois and Montrésor. Montrésor is a beautiful village with a chateau and water meadows crossed with walks. The demoiselles were really busy (but this is Susan's field of expertise, so more of that from her).

Over dinner (at the Gerbe d'Or and including, once again, the Cointreau Souffle) we made plans about what to do with the boulangerie. Sure it was a challenge, but we felt ourselves equal to it. The plan was to spend all day Sunday visiting the Brenne Nature Park and the area around Preuilly so see what was actually there. The day was rainy, so we spent a lot of it in the car talking endlessly about the boulangerie and our plans for it. Although we knew the work would be expensive we thought it might be the right place for us, lack of garden not withstanding.

On Monday morning it was back to Preuilly to see a couple more properties, including one arrangement of 3 houses around a courtyard. Most odd, and none of the rooms in any of the houses were of a decent size. Then we were taken (almost as an afterthought) to see a three bedroom house with garage and attached barn which had once been a granary.

The Old Granary, once a barn 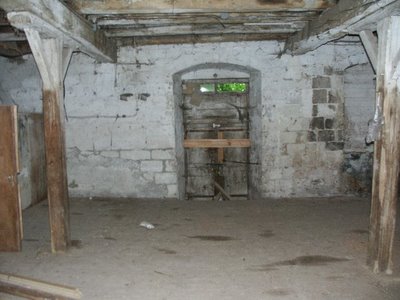 As soon as I walked in, it felt right. Sure it had a lot of issues, but they were, for the main, visible. The roof obviously needed doing, and there was obviously no kitchen or bathroom (or working toilet), but it had all the space we feel we need. There was even a garden. I loved the way the buiding felt so solid, even with the repairs that needed doing. The walls of the barn almost a metre thick, made out of carved limestone blocks, the encaustic tiles on the floor of the sitting room.

I think we decided there and then that we would make an offer, but not until we had a survey done, and we wouldn't say anything to the agent. Unfortunately neither of us knew the French for "Building Surveyor", so it was difficult communicating to the non English speaking Immobilier what we wanted. A very nice lady wandered in off the street to look at another property, and was immediately roped in to try help because she spoke a little English. We now find out that there is no word in French for building surveyor................

We left the agent, promising to be in touch.............and so back to Paris and the Aeroport Charles de Gaulle. Never again!

Email ThisBlogThis!Share to TwitterShare to FacebookShare to Pinterest
Labels: Buying a house, Montrésor, Our house in Preuilly, Pictures of Preuilly

Just to wish you both all the very best.
Remember that good old Irish-American saying: "When the going gets tough, open another bottle."
Cheers!
The Irish bloke, AKA Loudon