I have just taken delivery of my copy of the new Field Guide to the Dragonflies of Britain and Europe by KD Dijkstra and Richard Lewington. Even with the brief flicking through that I have had time for I have learnt stuff.

I see I will have to keep my eyes peeled for Calopteryx splendens hybrids. Apparently I could get hybrids with C xanthostoma and at least one subspecies. That should keep me on my toes. Image below left is C splendens male, taken in our Essex garden July 2002. 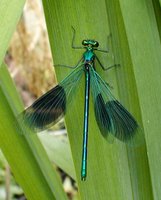 Sadly, the authors do not rate la Brenne particularly highly - their beef is that too many of the ponds are privately owned, so although there are interesting species, you cannot necessarily get to see them, and the future of their habitat is not assured. Clearly my networking skills are going to have to go into overdrive to get the best sightings possible - I hope my French is up to the task! On the other hand, the Loire Valley is very highly rated, and there is an interesting section on speciation (the Loire Valley is important because species from the south-east, the north and the west meet or overlap here).

Not only is this book informative, but it is beautiful - mainly due to Richard Lewington's illustrations - he is a national treasure I think. As a result of his beautiful illustrations I have been able to identify the teneral damselfly I found in the bramble patch that will become our garden - very definitely a male Lestes viridis Western Willow Spreadwing (aka Willow Emerald Damselfly). No surprise really to get this species in the garden, as they are common in the area and often seen in gardens. (Teneral means newly emerged and not yet fully coloured and therefore difficult to identify.)

The book also has photographs - one of which possibly demonstrates why C splendens are 'eclatant' in French. Males have a creamy white 'tail light', and in that rather dark tubular abdomen it is rather reminiscent of cream oozing out of an eclair. The photo shows one displaying his tail light to another male - it had never occurred to me that eclairs were in any way threatening, but perhaps if you are a demoiselle you have to be more careful.

My only regret with this book is that it does not include the vernacular names in French. This is purely selfish, as it would help me quickly and easily learn the French names. I can quite understand that for space reasons the hundreds of European common names are not included.