Lunch by the River

The day we signed the compromis de vente (the pre-contract, when you pay the deposit) was an absolutely beautiful day in August with warm sunshine and blue sky. We bought some air dried ham, some carrotte rapee, some celeri remoulade and a baguette at the charcuterie in la grande rue and headed down to the river to sit in the open air and eat our lunch. We chose a spot that had some stone benches at the edge of a small carpark. The blocks of stone were probably really intended just to prevent people accidentally driving into the river, but the view from them was charming. There was a plum tree with many windfalls right next to us and the combination of the endless stream of insects coming to feed on the plums and the restless damselflies in the vegetation along the bank made for a fascinating lunchtime. 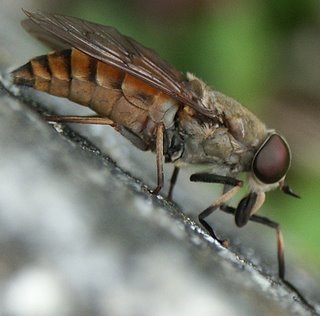 The star attraction at the plum tree was a beautiful big Horsefly. This turned out to be Tabanus eggeri, a species that was new for me, and one we don't get in the UK. They are easily identified because the first posterior cell on the wing is closed. Flies are often identified to family level by the pattern of veins on their wings. It is more unusual to get an easy ID like this to species level with wing venation, but other clues are her very black antennae and very orange abdomen. Also, unlike many horseflies, she does not have any obvious pattern of red and green stripes across her eyes. This particular fly had partaken of the fermenting plum juice a bit more than was prudent. She was so inebriated she kept falling over - an utterly shameful exhibition. And yes, I can tell she is a she (because her eyes are separated across the top of her head. Males' eyes touch at the top - seriously!).

Visiting the plums along with her was a hornet Vespa crabro, Red Admiral butterfly Vanessa atalanta and the inevitable social wasps Vespula sp.

Snooping about in the grass, irises and flowering umbels Apiaceae were various small blue damselflies and dashing about above them the bigger and more powerful darter (aka Meadowhawk) dragonflies Sympetrum sp.

We photographed Variable Bluet (aka Variable Damselfly) Coenagrion pulchellum, Common Bluetail (aka Blue-tailed Damselfly) Ischnura elegans, Large Redeye (aka Red-eyed Damselfly) Erythromma najas, and, by far the most common species that day, Blue Featherleg (aka White-legged Damselfly) Platycnemis pennipes. These last are rather strange faded creatures with, as their name suggests, legs that appear to be feathered. All other genera of blue damselflies are almost neon blue and black, at least in the males, so the Featherlegs are really easy to distinguish. And yes, the Redeyes really do have red eyes (all the others have blue).