Eating at the top of the Pyrenees

The first we ate at was last year at the refuge at lac d'Ilheou. They have a road (OK - track) they can drive up to get supplies in, but no internet or phone signal. That means they can serve a well cooked omlette served with a tomato salad for 7€, and drinks by the can for 3€, but not take credit card. Cash is needed. The second we ate at - also last year - was the Lac de Gaube, which we wrote about here. They also have a track, so they can drive in supplies and do a proper three course lunch.

This year we were more adventurous, and ate at two refuges which had signs saying that they had no facilities to deal with rubbish, and everything on site was delivered by helicopter. The first was at Refuge Oulettes de Gaube where we were lucky enough to get the last two picnic boxes, even though we were very late for lunch (15:15) and we hadn't placed an order. We had tried to, but either we had an old phone number or the phone wasn't working. The lunch wasn't spectacular - rice salad, a couple of pieces of cake, but it was fuel, and the view more than made up for it. We didnt order beer, even though they fly in kegs of a local artsan brew to serve on tap. 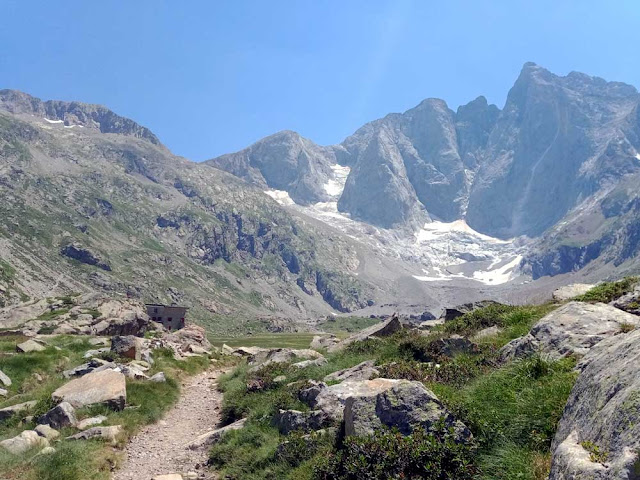 Two days later we ate at the Refuge d'Estom. We had started our walk a couple of hours ealier than on the previous walk, so we arrived for lunch more or less at the same time as every other slow walker. It was a really good luch, too, a planche of mixed charcuterie, smoked fish rillettes, and cheese. 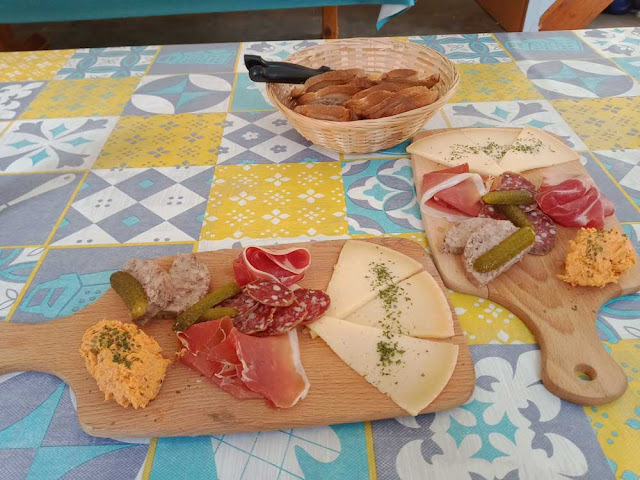 Once we work out how to make bookings and arrive at lunchtime we will dine at more refuges. They are without doubt dining experiences, and the people who run them work really hard under quite trying conditions. There's no electricity except for what they can capture from the sun, and having to fly in everything (although I am guessing that someone occasionally does the 15km return walk to get stuff as well) must make it a logistical challenge.