I wrote yesterday about the need to carry walking poles in the Pyrenees. Susan did - one in each hand, but I improvised with the electric walking stick.

Many years ago (possibly as long ago as 2008) Susan's father gave us a camera monopod. It has been woefully underused util last week, when I realised I could kill two birds with one stone: carry a stick and always have a camera ready.

It worked really well, even if the rubber tip wore out and I really needed two sticks. It's a start though, and I am sure I can come up with a solution. 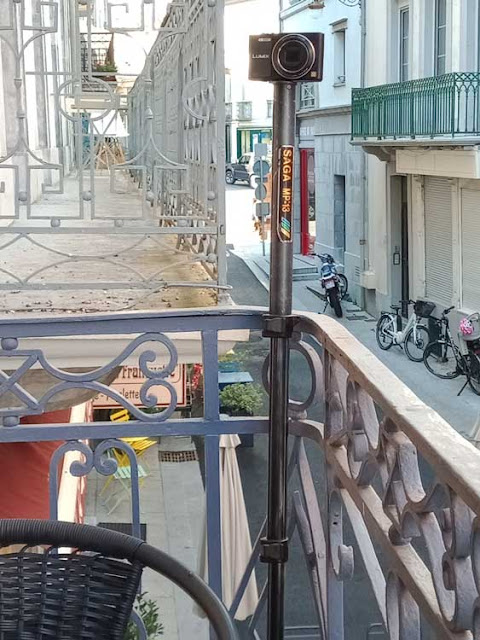 The camera is really light, and wasn't really noticeable on the end of the stick. It meant that I could really quite quickly turn the camera on and fire off a couple of shots, some of which you have already seen on the blog.

Unfortunately half way through our second walk the battery of the camera went flat, and when we returned to the apartment I discovered that I had every type of USB cable under the sun - except the one I needed to charge the camera battery. There weren't any suitable cables on sale anywhere we went, so I had to improvise.

But more on that later.

I, too, had a monopod that I used as a cane. Since it was telescopic, I could put it in my suitcase. Very convenient!