Preuilly's little treasure of a chapel is finally having its rare danse macabre wall paintings conserved.

Aline Berelowitsch and her team of freelance conservators have the delicate task of conserving these medieval paintings that have suffered over the centuries from bad weather and acts of vandalism. The work is scheduled to finish by the end of July. 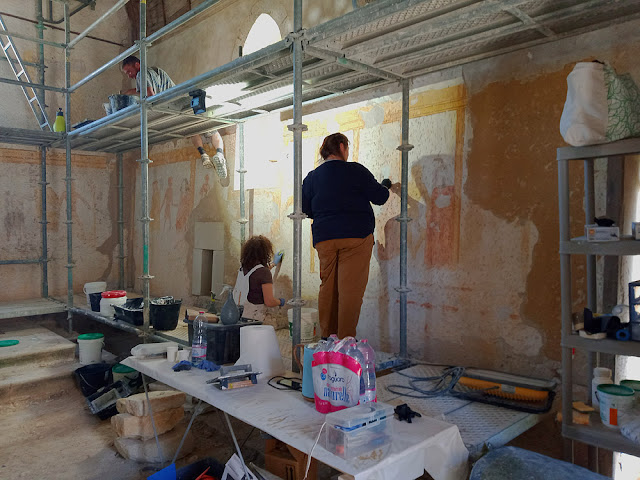 The conservator's job is to remain "honest, as close as possible to the original work, without extrapolation or speculative recreation". The complete restoration of the chapel is scheduled for this autumn. The mayor of Preuilly thanked the regional director of AG2R, an insurance company who made a major donation. He indicated that to finance this operation, "every euro counted".

The co-president of the local history society (known as the SAP) reminded everyone of the dedication of the former president of the association who almost single handedly sought the funding to support this project. The strong popular support in the community was also remarked upon.

I have a standing invitation to pop into see the work anytime the door is open, at 11am when they take a coffee break. I'll try and turn up with cake from time to time.

Aline told me that they had deliberately scheduled the work to start after April, so it wasn't so cold that their traditional lime render would freeze. They are filling in the big missing patches of render to make them flush with the painted surface. Later they will delicately paint sections with fine coloured hatching so the paintings make sense to the viewing public but do not go further that what we are sure was there originally and are clearly the work of the conservators, not the medieval artists.