A Year After the Fire

One year after the fire at Notre-Dame de Paris, a huge crane hangs above a cathedral still wrapped in scaffolding like a spider's web. Just now it serves as a symbol of the Covid-19 lockdown -- silent, empty, at risk and helpless as events unfold around it.


Notre-Dame, a Gothic jewel, missing its spire, with no remaining original structural carpentry and a fragile vault, sits sleeping. The fire touched people all over the world, and the building remains in need of emergency work according to the team that watches over it, even if it is very unlikely to collapse. With another emergency, the Covid-19 crisis, Japanese, Chinese and American tourists have stopped coming to take selfies from the safety perimeter.

Notre-Dame at night, before the fire. 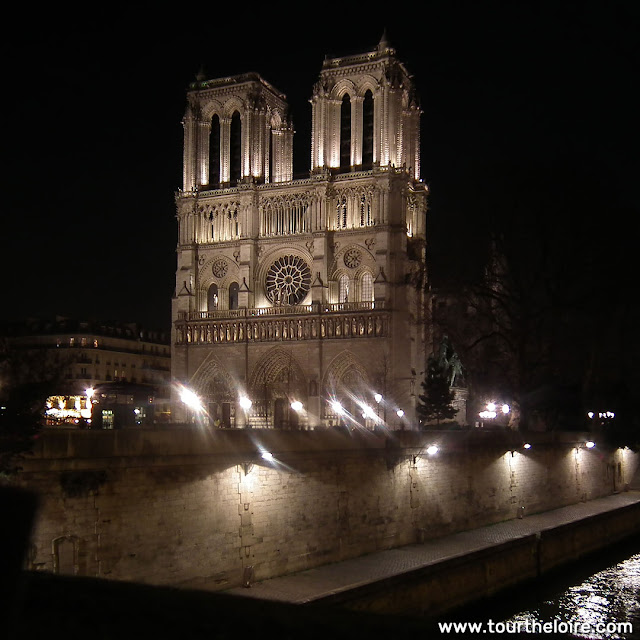 The construction site had been delayed during the summer by measures against lead contamination. Then in the autumn and winter, bad weather, especially high winds, greatly disrupted work. As spring loomed, the dismantling of 10,000 bent scaffolding tubes, some of them welded together by the fire, was imminent. And then the Covid-19 lockdown plunged the construction site into torpor.


In addition to the giant crane, a steel girder belt had been erected. A second light scaffolding was erected on either side of the old one. Rope workers, called "squirrels", were ready to come down and cut up the old scaffolding into pieces. This delicate four-month operation was interrupted, but General Jean-Louis Georgelin, who presides over the Etablissement public de Notre-Dame, is examining the possibility of having work partially, progressively and in a targeted manner resumed. 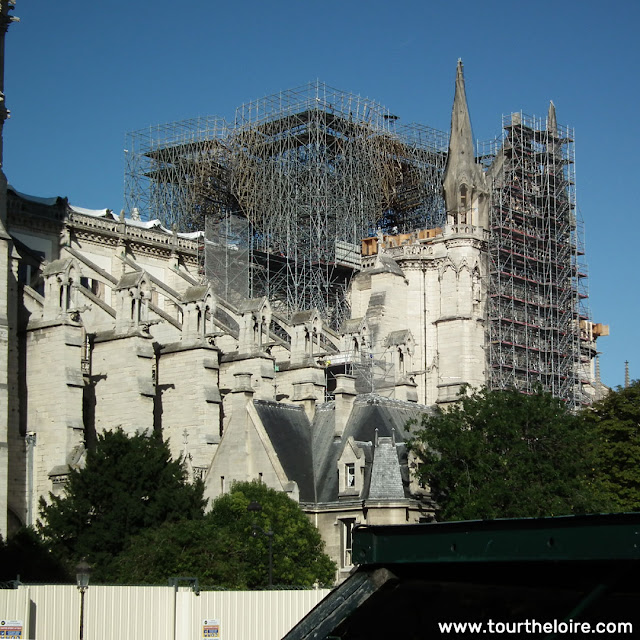 For example, it should be relatively easy for the rope workers to stay the appropriate distance apart.

A study is being conducted in close consultation with the project management, the restoration companies and all the heritage protection stakeholders.


Before mid-March, the site mobilized between 60 and 70 workers, mostly coming from a handful of major companies (Europe Echafaudage, Le Bras, Jarnias, Pierre Noel) plus smaller numbers from a myriad of independent specialists. Although robots have cleared the nave, the debris still has to be removed above the huge vault. These operations will in principle be completed in the summer, while the dismantling and cleaning of the great organ will be quietly carried out between now and 2024.


Sensors are installed everywhere to identify the slightest possible movement (although none is being detected, thankfully). Beyond the emergency work, the real work of restoration is scheduled to start in 2021.

A view of Notre-Dame taken 4 months after the fire,
but from this angle you would not realise anything was wrong.

Chief architect Philippe Villeneuve is still carrying out the restoration studies, which will inform and direct the work. Consolidation of the vaults may still be necessary and they plan to clean out two chapels as a test. It's hoped this part of the project will be done by the autumn.


The options for how to approach the next steps will be submitted to the National Heritage and Architecture Commission. In addition, the cathedral will have to be thoroughly cleaned throughout and a final protective tent erected.


At the moment they are working on the supposition that the lockdown will last about two months, and they are confident they will be able to absorb that over the total period of 68 months to still have the building finished in five years.


Notre-Dame, 4 months after the fire, with the parvis (forecourt) barricaded off,
to create a work depot, and to keep the public out. 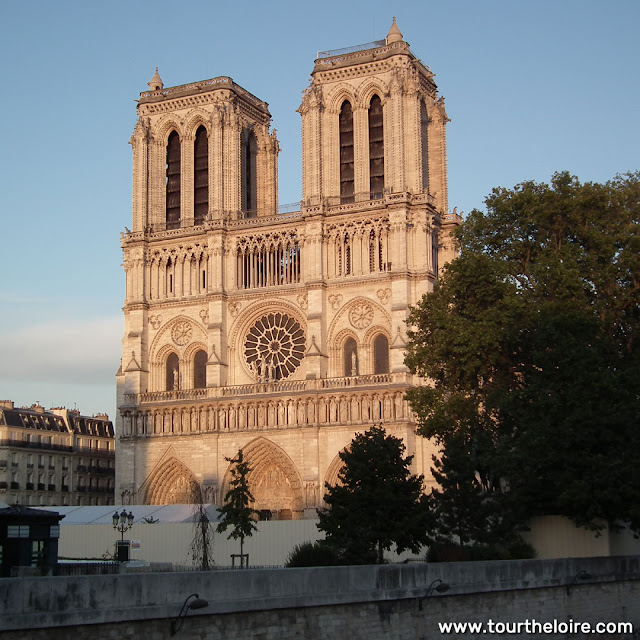 There is no way to predict the final outcome of the restoration at this point. There are opposing views dividing supporters of this national and religious symbol that need to be resolved: Do we rebuild Viollet-Le-Duc's spire exactly as it was; or design a "contemporary architectural gesture", as Emmanuel Macron wishes? What will the UNESCO view be?


Some have proposed a glass spire, or to create an organic park and garden on the roof, or even a panoramic terrace for tourists...


The architect Philippe Villeneuve makes the case for fidelity to the brilliantly retouched Gothic style of Viollet-le-Duc (after all, there is a complete set of plans still extant for this). Villeneuve feels that an identical reconstruction would be more likely to meet the deadlines, and it is not unexpectedly the option which the majority of French people favour. Personally I think going down this route would be a shame, and a violation of the Convention on the Conservation of Historic Monuments. Viollet-le-Duc had his day. Let a contemporary architect shine now (and don't embarrass everyone by making a copy of a 19th century interpretation of what a medieval spire would have looked like -- who is going to respect that?).


General Georgelin, former Chief of Staff of the Armed Forces, appointed by Emmanuel Macron, took over to lead the project at the end of 2019. He is a decisive man with a firm hand, who will have to arbitrate between the many experts, commissions and trades involved.


The construction site has become more expensive due to unforeseen circumstances - lead first of all - and longer delivery times. 902 million in donations and pledges were made, ranging from a few dollars from private individuals from all over the world to huge gifts from patrons.


There are some who say it is too much of a windfall, but the General now believes that all the money will be needed. He has expressed his deep gratitude to the 340 000 donors.


After the controversy of the first few months, the concern about lead contamination seems to have largely subsided.


The investigation by three examining magistrates into the fire, which probably originated from malfunctions and negligence, is still unknown (my money is on an electrical fault in the clock under the spire, which was adapted in 2012). There is still a question mark over whether the companies involved in this case and the State will be held liable, with the subsequent insurance implications.


Also still not settled is whether an international architects' competition as envisaged by the government will take place. And how will the French public be "widely consulted"? There are still a lot of unknowns and questions surrounding the project.

The BBC four programme last night was excellent and informative. Well worth watching if you didn't. Cleaning the leaded windows, sourcing the differing limestones and info and logging the timber remains... I enjoyed it a lot. C

On the one hand, Viollet-le-Duc should be commended because he helped save many treasures en péril of the French patrimoine architectural, on the other, he went overboard in creating medieval structures that probably never existed, like the flèche in Notre-Dame. He let his medieval imagination go wild in the reconstructio of the Château de Pierrefonds. However, he worked closely with Prosper Mérimée, and we should be thankful for that.

It will be interesting to see what decision will be made about à l'identique for what can be seen and bold new métallic structures to replace the forét, notably.

I'll try to get to see it at some point. I didn't know about it until you mentioned it so missed watching the broadcast last night.

Wasn't Viollet-le-Duc interpreting an earlier spire that burnt in the 17C? Or am I misremembering? I'll have to go look it up now :-)

Original 13C spire was removed in the late 18C because it had deteriorated so badly. Viollet-le-Duc's spire replaced it in the mid-19C.

I misspoke about the flèche. When I said never existed, I meant in general. The flèche he created was probably his own interpretation of such a structure, unless he had available accurate drawings of the original flèche. Sometimes his renditions are "new, improved!"

We watched the programme on BBC4. It was excellent, very interesting and well presented.

Your UK readers would be able to access it from BBC iplayer.

Oh, yes! His was definitely his interpretation of what the spire should have looked like, in his romantic antiquarian opinion. Like the roof of the kitchen at Fontevraud.