Anniversary of Our First Night in the House (2007)


It is the thirteenth anniversary of our first night in our house in Preuilly. We hadn't moved in at that point, but were still just coming over from London from time to time. It was like camping we had so few home comforts. This is a repost from 3 April 2007.


This was a long standing planned trip, partly in order to try put a little pressure on M.Galland (the roofer) to start soon.


We had booked on SpeedFerries, leaving on their first sailing of the new season. On the Monday before we left we received an email saying that the start of service had to be delayed, so we had to make alternate arrangements. Luckily I was able to book a ticket with Norfolk Lines, which is a longer journey (2 hours to Dunkerque, which also adds the best part of an hour to the drive) so all was not lost. The amended booking meant that we had to leave home at 3.30am in order to make our 6.00am sailing from Dover, which meant that by the time we arrived in Preuilly we had been on the road for 13 hours including a diversion through Rouen, a town which appears to have me totally jinxed.


Our first port of call was M. Bertucelli to check on the plumbing works, which we were assured were complete. This caused us to rush to the house, as the thought of having our own toilet was very exciting. 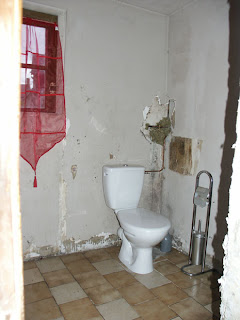 Arriving at the house, first port of call was to wonder at the new technology - a flushing WC. We flushed, and the cistern didn't fill up. I turned on the stopcock inside the house (which made no difference) so we moved outside to the external stopcock. This is a metre under a metal plate in the middle of our neighbour's driveway. I leaned into the hole to turn the water on... and my mobile phone and hankie dropped out of my pocket into 6 inches of muddy water. I don't know if it was the sacrifice of my phone that caused the water to flow (could have been turning the tap on) but we now have tapwater and a flushing WC. Excellent!!


The next move was to set up our kerosene heater (donated to us from the junk left by previous tenants of our house in London). This meant a trip to Yzeures to buy fuel and various foodstuffs. It's always a pleasure to wander around a hardware store after driving for 13 hours....


We had our first dinner together in the house, vegetable soup, followed by bacon and beans and pastries for dessert. We weren't exactly warm, but the heater took the edge of what was to be a cold night. 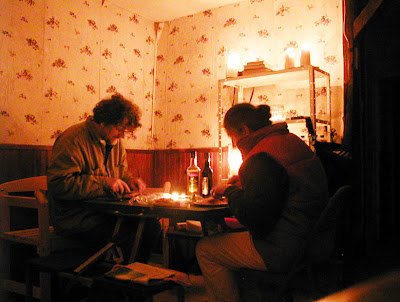 It rained during the night, which meant our slumbers were accompanied by the sound of dripping water, but at least none of it entered the room we were sleeping in. We did decided, however, that we would erect our picnic tent/gazebo thing in the front room, and put the bed in there. This would provide us with a waterproof roof, and a lot more room so we could set up washing facilities. It also means that we can have our clothing in the same room we sleep in, making inter-room dashes in the cold unnecessary. 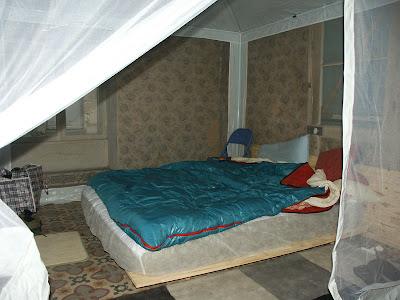 Friday was occupied with cleaning the front room, setting up the tent, moving the bed, putting a curtain over the space a door would normally occupy (and will, one day, occupy again). We also found time to visit M. Galland, the bank and the supermarket (and the hardware store). This set the pattern for the weekend - cleaning, visiting hardware stores, and plotting how we will proceed with the work. 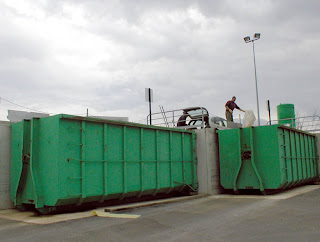 The only real diversion came on Saturday, when we met the man from the dechetterie (the local dump, although it's more of a transfer station) whom our neighbours had organised to remove the piles of cuttings from our garden. He took a trailer of clippings to the tip, and we followed. He explained the system to us, and we trotted off to collect our own carload of stuff to junk. Most of it was "mixte", but we did have some glass, wood and cardboard which went in their respective skips, as did the old paintbrush cleaning mixture. As they say in the area; "Au pays de Descartes, je pense, donc je trie" (In the land of Descartes, I think, therefore I sort). 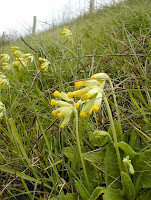 We were amazed by how cold it was, considering how advanced spring seems to be. All the roadsides were covered in cowslips (coucou in French, the first of the wild primroses to appear) and the cherries and plums were blooming, as were the magnolias. Until recently, cowslips were big news in England, as modern farming techniques had destroyed much of their habitat. Thankfully they are on the way back in the UK, but we have never seen them in these numbers


On Sunday afternoon we rewarded ourselves with a drive in the country. as we drove on the road towards le Grand Pressigny (a trip we have done many times) I noticed, for the first time, the chateau at Etableau, a hamlet about 1.5 km from le Grand Pressigny. Why we have never noticed this before I can't say. It isn't as if it is small or anything.... 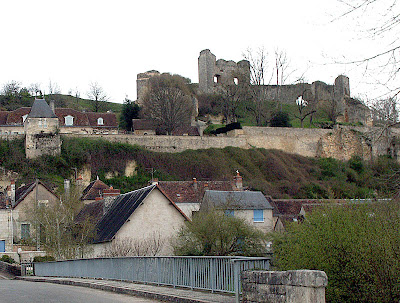 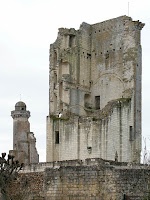 We also saw a different view of the chateau at le Grand Pressigny, which makes it look like a cutaway from a Richard Scarry book.


Although it sometimes feels like we aren't progressing with the house, it is coming on peu en peu and we are getting a lot better idea of what it is we want to do with it, which is a lot better than acting before you've decided!!

Email ThisBlogThis!Share to TwitterShare to FacebookShare to Pinterest
Labels: Buying a house, Food and Drink, le Grand Pressigny, Moving House, nature and wildlife, Our house in Preuilly, Pictures of Chateaux, Pictures of Preuilly, The Car and Driving