France is home to a remarkable range of 19th century door knockers. One of the most popular designs is often referred to as 'the hand of Fatima' and supposedly derives from ancient Islamic symbolism. Personally I think the link is fairly hazy, although there probably is a vague connection by the romantically inclined. 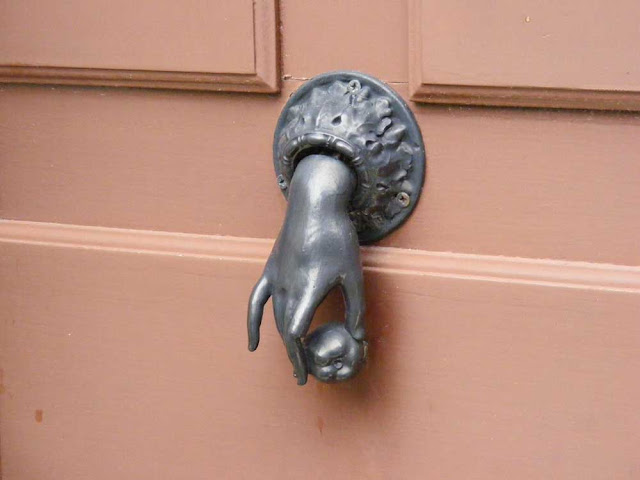 The original 'hand of Fatima' was a palm shaped amulet used to ward off the evil eye. It is a completely stylised open right hand, not a realistic hand, decoratively patterned and often containing within it a stylised eye, representing the conscience. The hand can represent femininity, fertility, strength and/or good luck. Five, as in the number of fingers, is considered a magic number in Middle Eastern and North African traditions. It is still widely used in the Middle East and North Africa.


There is a similar symbol known as the 'hand of Miriam' in Jewish tradition, although to North African Jews it is simply referred to as 'hamsa', the Arabic for five, and this is the name it goes by all over the Middle East and North Africa now. The symbolic use of a woman's hand probably dates back to ancient Babylonia and any culture that indulged in female goddesses. The European versions tend to include references to fertility, with the hand holding a piece of fruit.  In some cultures the hand is there to ward off the evil eye or to bring good luck. There is a connection to healers and carers in some places, with the fruit representing botanical pharmaceutical knowledge and the story of Fatima includes how she cared for her father Mohammed. 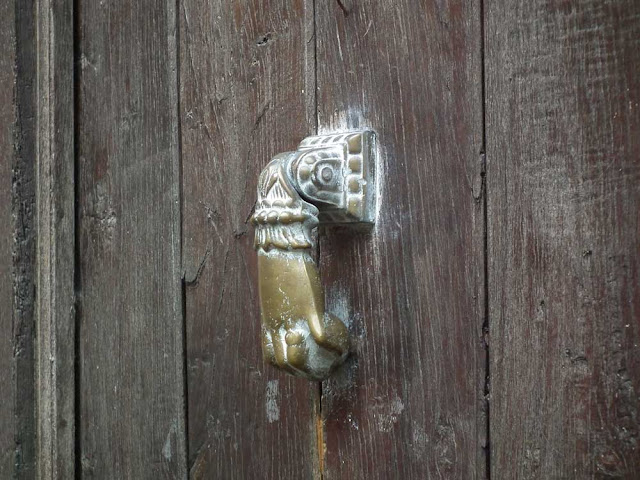 Surely a coincidence, but the Hamsa is associated with an Israeli saying that is the equivalent of the English 'knock on wood'.


It's doubtful that the artisans who cast these door knockers and the householders who bought them were really aware of the tangled web of symbolism that can be attributed to them. I have always found them rather creepy, and they are referred to as 'the dead hand' in our house. I think 19th century homeowners were potentially attracted to the rather occult feel of these cold disembodied hands.


I have read one theory that the hand represents Eris, who threw an apple into the wedding festivities of Peleus and Thetis in Greek mythology. There was an argument over which of the Goddesses present was the most beautiful, that set off a chain of events leading to the Trojan War. Since Eris is the Goddess of Discord, I find this explanation difficult to swallow.


Then there is the theory that the hand signifies welcome, and the ring on the finger is connecting a vein that runs from there to the heart, symbolising love the same way wedding rings do. However, the hand is positioned with the palm hidden, not open and beckoning in welcome. There is no explanation for the fruit or ball in this version of the symbolism, and the ring wanders from finger to finger depending on the particular example you are looking at (and sometimes isn't there at all).

We love a good door knocker but never really thought about the symbolism, interesting stuff.C

Plus, as Simon and I were just discussing, apples and women -- gotta be a connection to Eve there somewhere.

I love the hand door knockers and wish we had a door that we could put one on! The second one is especially lovely.

You might just have to compromise by putting it on a plaque next to the door or something.

Makes me feel very homesick for our French house , which has a fantastic door and impressive door knocker :-(

There are some truly splendid ones around. Our house unfortunately has some very ordinary modern door furniture, and we have a door bell, not a knocker.