Today is Anzac Day, when Australians and New Zealanders commemorate their war dead. I thought it was an appropriate day to write about Muriel McPhee, someone with a poignant story of loss and endurance due to the First World War.

Trousseau items made by Muriel McPhee. 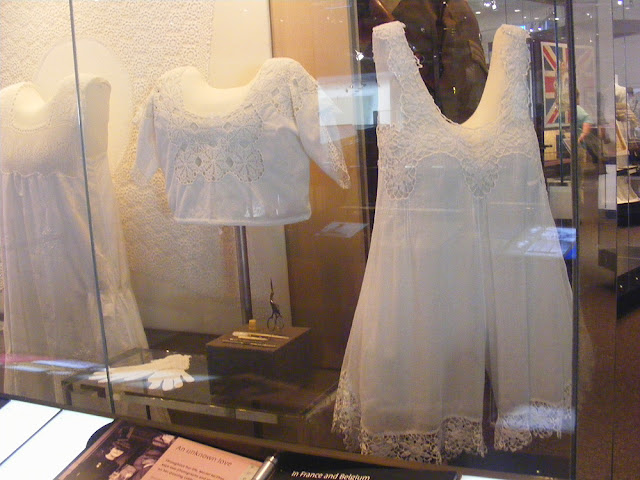 In the collection of the National Museum of Australia and in a display case in the First World War section are a number of pieces of beautifully made lacy underwear. They are part of more than a hundred pieces made by Muriel McPhee and stored in old flour and sugar sacks as her trousseau. It appears that at the start of the War she had a sweetheart, but he never came back from the War, and the trousseau items were never used. She never spoke about this and even her family don't know who the young man was, although she kept a photograph of him on her dressing table and it appears that he fought in Europe with the 41st Infantry Battalion, who lost two thirds of its men. She never married.

She worked on the family cattle farm and sewed in the evenings. One of the saddest items is the only one that would have been worn. It is a mourning overdress, of black net, a thrifty design meant to be worn over clothes you already had, to indicate you were in mourning.

Judging by that last photo, she would have done all that intricate work by the light of only a kerosene lamp.

Yes I believe so. It's crochet though, not needle lace, so a lot of the skill is by feel, especially if you are good.

So many people feel really hard done by just now, but it's nothing compared to the hardships endured by people during the two world wars. And other wars. A very timely post to remind us what real loss is and that when all we have to do is stay home and grumble, it's not so bad.

Yes, a real reminder of how privileged we are, and how much stress people lived through in the past. We have to endure a few months of inconvenience. They had years of it.