Life in the Pandemic

So this is what a lockdown feels like. At the moment we are allowed to go shopping for necessities and take a walk alone (in an area no larger than two kilometres radius) but really we are confined to the house and garden. We have to have a form justifying our movement and identification with us at all times if we are out. Simon and I have both been out, separately, for walks, but nothing further as yet.

The most notable thing about the escalating crisis is how rapidly life has changed, and how rapidly the government establishes rules, then tweaks them as the situation changes. All this week we've seen some change in what we can and cannot do, with significant new developments and restrictions every day. So far we know no one in any country who has had the virus, or even thinks they have had the virus. Thank goodness.

Our business has dwindled to nothing. None of the chateaux, restaurants or wineries are open, so there isn't much we could show travellers, even if they could get to us and even if we were allowed to be in proximity to them. All of our upcoming March, April and June tours have cancelled.


The supermarket just before lockdown. A few people in masks and/or gloves. No panic buying.
Only one person per household is allowed to enter now. 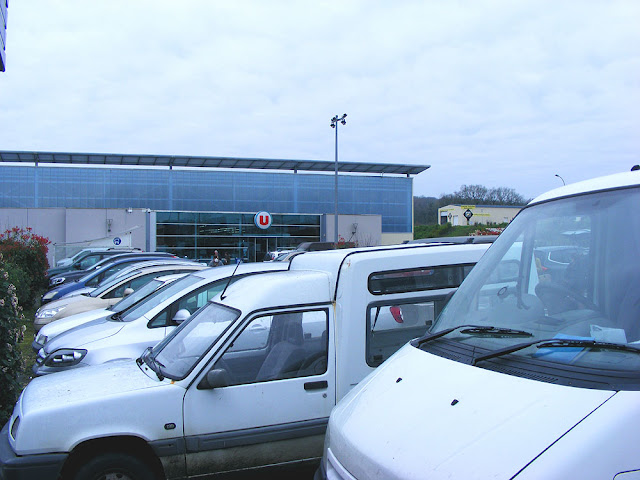 The State has announced an aid package for small businesses and independant workers, promising that no one will go under. Many independent workers in these small rural communities are already in receipt of what is called a prime d'activité, a monthly income top up payment from the State. That will of course continue, with many more people eligible and applying for it, and the average monthly payment will surely increase as people suddenly find themselves with no earned income at all.


The shop at the Jardins Vergers de la Petite Rabaudière the evening before lockdown.
Busy, but not a crowd, stocking up on organic local vegetables. 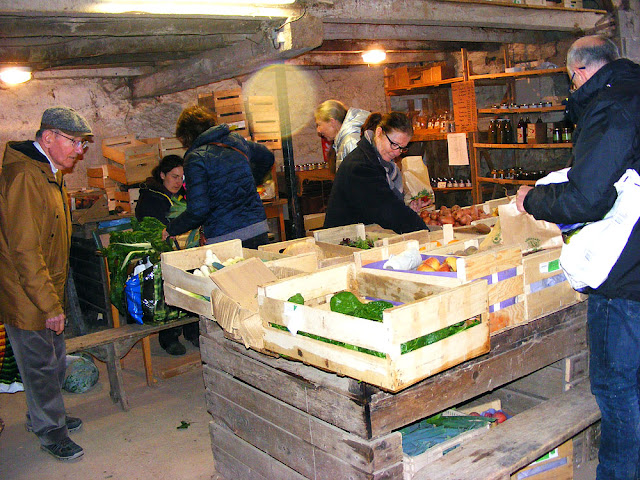 The new package allows businesses to delay the payment of tax and utilities bills, and offers a €1500 grant to anyone whose income was 70% or more lower in March 2020 than March 2019. We are lucky not to have any debt and a frugal lifestyle and so with a little help from the State think that we will weather this financial storm.


Frustratingly, it looks like we won't be eligible for this until April. We actually earnt more this March than last March, due to a walking tour I did for a group of American women just before the lockdown began in France. In contrast, our season last year started rather late. Normally we expect our first clients in mid-March, but last year our first tour was in April. This year we've already done several tours, with bookings in January, February and March.


Many small businesses have chosen to close rather than risk contact with the virus for owners and staff. They can do this because the State is supporting them, including by offering unemployment benefit to wage earners who are stood down. Some business owners have sent the staff home and are running the retail outlet alone. Many people are at home because they need to look after school age kids, who are also at home because of the nation wide closure of education institutions.


Customers waiting to enter the pharmacy, which is limiting numbers in the shop.
They are maintaining the recommended distance from one another. 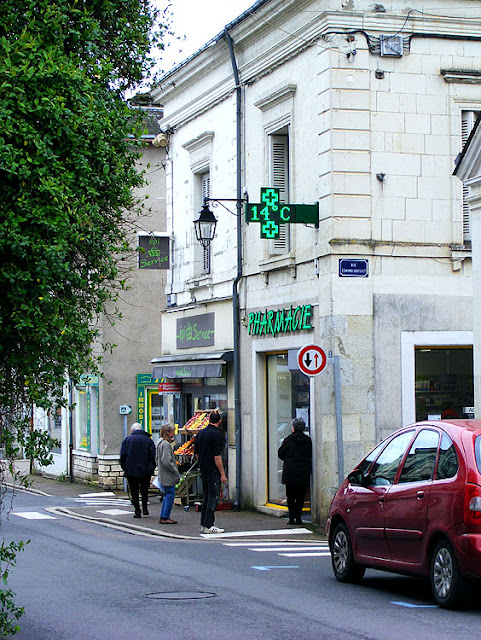 The current lockdown is due to end on 1 April but there is very little question it will be extended for a number of weeks, and we may even get further restrictions to our movements. It's all about 'flattening the curve' ie slowing the rate of infections by limiting people's contact with one another. It's not about eradicating the virus in the population, it's about limiting the number of sick people at any one time so the health system can cope. It means we'll be dealing with restrictions for longer but fewer people will die due to lack of resources to care for them.


People will still be allowed out to shop for food and medicines though, and there is no expectation that supplies will run short so there is no panic buying to speak of. And in any case, much of what we eat is locally produced and will be delivered by the producers to our corner grocery store just a few blocks away. One of the market gardens have told us to ring them, and they will deliver to our door.


Cemeteries and parks are closed. 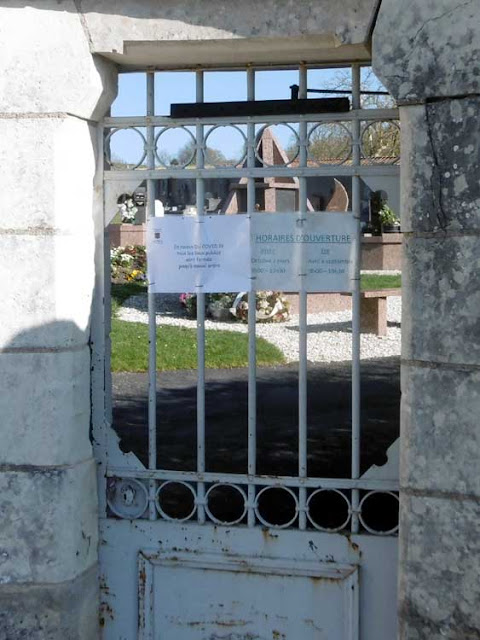 Simon is in the at risk group, being asthmatic, and these days very prone to bronchitis. He takes several daily medications to keep his lung function up to something approaching normal. It's very worrying, because if I go shopping or to the laundromat (our washing machine has died) I could bring the virus back if I am unlucky or not careful. I have decided not to volunteer for the food bank until the crisis is over to eliminate at least one reason for going out and being in contact with people.


We are very lucky here in the Loire Valley to be maintaining our position at the bottom of the French COVID19 league table. By far the least number of confirmed cases, and only one death so far in Centre Val de Loire. Our own 'county' of Indre et Loire has 25 cases, a quarter of whom are elderly nuns from a single convent, and most cases are from Tours I think (although it's hard to be sure as the authorities are careful not to reveal too much detail about where patients live). One of our neighbouring 'counties', Indre, has just a single case. 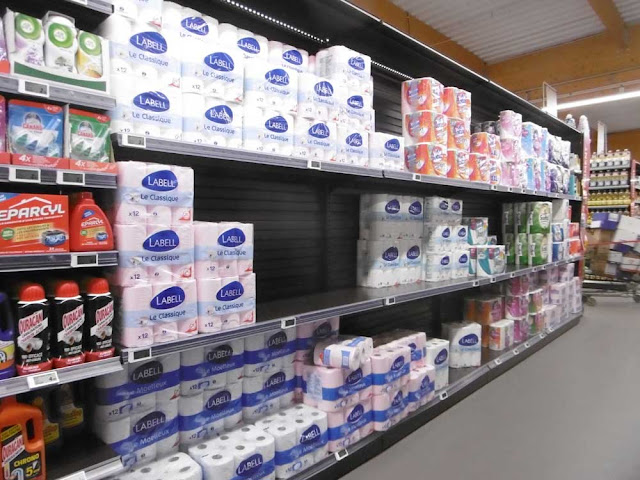 In the meantime, trapped at home, we are even more glued to social media than usual. I try to bake every day because good cake is always a moral booster. I'm spending much of my time trying to make sure the English speakers who live here are up to date with things -- a sort of extension of my networking around Brexit issues. Most people are keeping up for themselves, but there have been a few instances where I've been able to provide useful information.

I have ideas of doing a mega spring clean and some sewing, but so far, Facebook is winning.

As there is no curfew.... yet... I shall be going to Descartes this evening for "essence" for the mowers, etc.
I hope, that way, not to come in contact with anyone... and am happy to wait until no one is around!!
Other than that, I can excercise here... I have plenty to do...I'll not be bored.
Any shopping for milk, fruit and veg will be the EpiCentre!

I wouldn't be leaving Preuilly, except for our laundry problem.

Looks like it could get worse as I have just read an article where Macron is furious that the French people are not taking the guidance - "When I see that people continue to go to the park, to get together, to go to the beach or to rush in the open markets, it is that they did not understand the messages"

This is certainly unprecedented. Such a complete lockdown! Even during the Occupation we were able to move around. There were curfews, of course, but there was no restriction otherwise. I'm not sure most of the French people understand the gravity of the situation, the war against an invisible ennemy.

My brother is going to be 100 yo on Sunday and his two daughters were planing, before the confinement was orderedt, to get down to his place in Alpes de Haute-Provence from Grenoble were they live. I do hope they changed their minds. If not they may be fined heavyly and ordered to go back home.

I'm sorry for my brother, but it's nobody's fault.tyt

chm, happy birthday to your brother. Phone calls and Facetime or Zoom might have to substitute for in-person contact.

Susan and Simon, will you have a vegetable garden this year? Since we're not taking our usual spring trip this year, I thought we'd have a garden but since yesterday all nonessential businesses are shut down in our state. I'm waiting to hear if I can get seed potatoes.

Not sure about that. I think he got it out of his system yesterday with the clarification of whether you had to walk/jog alone and how far, and the banning entirely of leisure cycling.

Congratulations to your brother! What a milestone. It's sad his family can't be with him on the day, but they can plan a celebration for a bit later in the year I hope.

I've given up growing veggies. I don't have a reliable water supply at the orchard. And now with the organic market garden on the edge of town it seems more sensible to let the professionals do it and support them.