A Tour of the Cathedral

Building of Tours Cathedral (Cathédrale Saint-Gatien de Tours) started about 1170 and continued at what appears to be a rather relaxed pace over the centuries until 1547. It was built to to replace a half built cathedral that was burnt down in 1166 during a border dispute between Louis VII of France and Henry II of England. 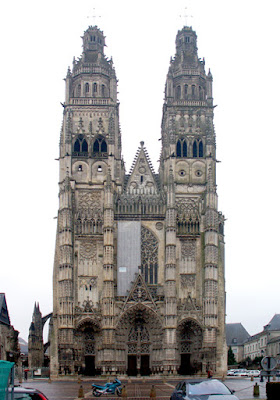 Because the builders took so long even once work had started, fashions in architecture changed a number of times. It was started in what the French call the "Romaine" period (the rough equivalent of Norman style in England) and finished in the middle of the Renaissance. These changes in style are most obvious on the towers on the western end of the cathedral, but they also show inside. While the towers were working skyward, the nave was being built from east to west, the first (the choir and sanctuary) being 13th Century, with additional bays being added until it met up with the towers. 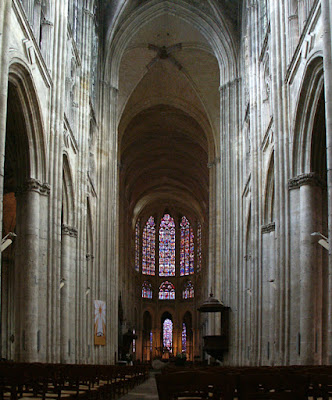 The stained glass isn't as famous as that in Chartres Cathedral, but also dates from the 13th Century and is (IMHO) equally spectacular. I think the reason it isn't as well regarded is because the glass at Chartres is almost completely of one date. In Tours there are a number of pieces of modern stained glass, and a lot of clear windows. 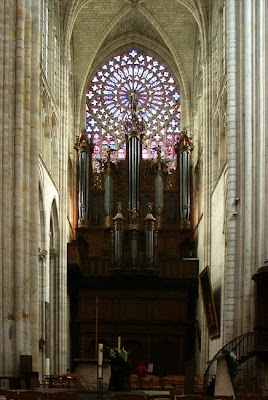 We went to the Cathedral during a lull in the action between us and the Préfecture in Tours (Paperwork, especially in France, needs to be done in small steps). It was a cold day, but inside the Cathedral it was positively arctic. There were a number of little piles of envelopes scattered around wherever there was a table, encouragingly stamped with the word 'chauffage' (heating).

wow. spectacular. in and out, thanks for these pix.