One of the reasons we bought a house in Preuilly sur Claise was the town's proximity to a large and very special nature reserve in an area known as the Brenne in the départment of Indre. Preuilly is about 15km from the western boundary of the Parc, in the next départment, Indre et Loire, and situated on one of the three rivers that flow through the Parc.

The Parc naturel régional de la Brenne was created in 1989, and includes 47 communes (local administrative districts). The area is largely rural and covers an area of about 167 000 ha with a population of 31 000 residents in the Parc ie fewer than 20 people/km². It is situated just to the west of Chateauroux and east of Poitiers, south of the Loire in central France. The N151 road runs through the middle and through the largest town within its borders, Le Blanc.

A mill on the Creuse at Le Blanc in December. 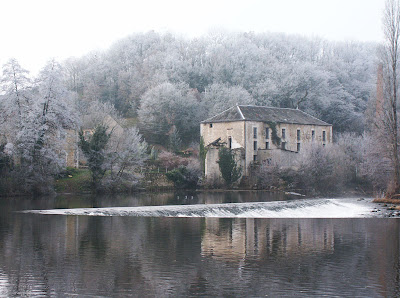 The Parc's charter states it has five primary objectives:
1. To protect and foster the appreciation of natural, cultural and rural heritage;
2. To contribute to the improvement and maintenance of the area;
3. To contribute to economic, social and cultural development and quality of life;
4. To welcome, educate and inform the public;
5. To engage in experimental activities or best practice to achieve the above objectives and to contribute to research programmes.

The Parc is administered by a syndicate made up of regional, departmental and communal representatives.

The Brenne is recognised as a wetland of international importance as desgnated by the RAMSAR Convention and is the third most important wetland in France. The area is best known as a site visited by migratory birds (about 150 species, and a similar number of resident species), but in fact, it is just as important botanically (about 1000 species of plant, 23 of them rare and including about 40 species of orchid) and for certain invertebrates such as dragonflies (over 60 species) and butterflies (over 100 species) and as one of the most important sites in western Europe for the European Pond Terrapin Emys orbicularis (la Cistude d'Europe) - the Parc's symbol - picture below. 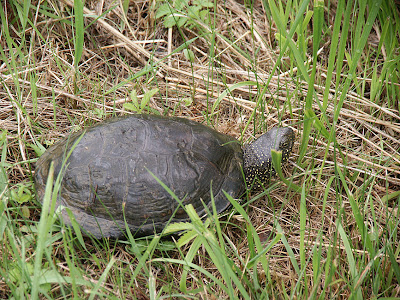