The area known as the Brenne was created in the Tertiary era about 40 million years ago, after the sea had advanced and retreated a number of times. It is a vast shallow bowl, part of the even bigger Paris Basin, collecting water coming off the Massif Central. Over time, clay has accumulated in the depression, creating an impervious base. In many places the deposits are rich in iron and have formed an intermittent layer of sandstone very resistant to erosion and known locally as 'buttons'. In the Miocene, about 20 million years ago, the sea encroached for the fourth and last time up the Loire Trough but was stopped by the low hills between Ligueil and Ciran. After this the Brenne became a vast wooded marsh, not yet cut by river valleys.

A small herd of Camargue horses (introduced) in the Brenne, seen from a bird hide. 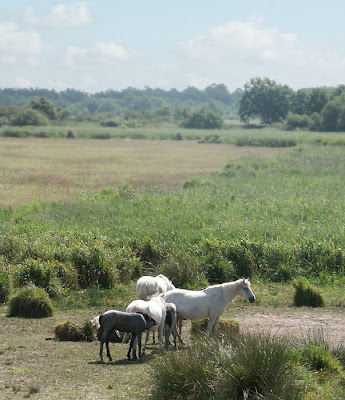 Finally, a little over a million years ago, thanks to the Ice Ages, water courses cut deep valleys across the plain. The ice itself never reached the Brenne, but the moving sediment it caused resulted in the erosion of the softer soils, leaving the hard buttons emerging from the landscape. The new rivers left their own sandy deposits too and so the diverse mixture of soil types we see today was established. 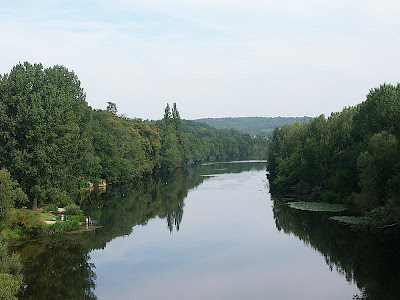 Very interesting post. Never heard of La Brenne until I spent a few days with Ken and Walt in St-Aignan in 2004.
By the way, you can ask Ken at ckenb/blogspot.com about the pronunciation of Preuilly. He knows phonetics and will give you the closest possible pronunciation. There's nothing like it in English, as far as I know. An upscale suburb of Paris is called Neuilly, and is pronounced the same.
Good luck with your house.

I think the Brenne does come under the heading of 'quiet backwaters' as far as the guidebook editors are concerned. Serious birdwatchers and fishermen know about it, but mostly it is just allowed to get on with traditional rural life - which of course has its own charm and is why we like it.

Good thought about asking Ken for guidance on the 'How to Pronounce Preuilly' problem.

Thanks also for the good wishes re the house. We are currently at a rather frustrating hiatus, waiting for a property in Australia to sell so we can replenish the fighting fund.