Amboise is a town I have never got to grips with. Probably because the first time I went there the whole town was shut and I ended up staying at an Ibis motel rather than a character filled hotel.

There is a huge chateau at Amboise. Started in the 11th century, it became a royal palace in 1434 then was extensively rebuilt (in the 1490s and again in the 1570s) but by 1650 had been turned into a prison. By the time of the French revolution it was virtually derelict and so most of the chateau was demolished. By the 1840s the chateau was once again in private hands and a start was made on restoring it, but it was damaged again in World War Two. What now remains is basically a 19th century rebuild of about one fifth of the original.

As you can see though: from across the river it is still an impressive - and imposing - structure.

Just down the road is the Clos Lucé, a manor house where Leonardo (no-one called him da Vinci before Dan Brown) lived the last 3 years of his life. In the grounds of Clos Lucé are some recreated models of some of Leonardo's inventions.

In an island in the middle of the Loire is an island with a scattering of buildings and a campsite. It also has this statue - the French equivalent of Old Father Thames? (Apparently it is supposedly Leonardo himself, with the head of Medusa. Why?) 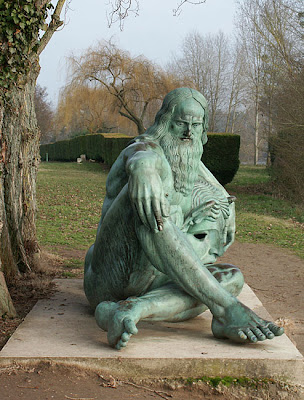 One thing Amboise has in abundance is tourists. It certainly seems to be a popular destination for Americans in particular and it's a bit of a puzzle to us*. It's not that there is anything wrong with the town - indeed, it is attractive - but so are many, many other small but rarely visited French towns. It has history - stuff happened at Amboise, interesting people lived in the town - but again, stuff that was just as interesting happened at places that are not packed like a sardine can full of tourists in the summer. At the moment it reminds me of a sacrificial anode - the tourists wear out Amboise while the rest of France gets on with life undisturbed.

*My theory is that at some stage Amboise appeared on US TV, either as a location in a drama or a recommended destination in a travel documentary. Certainly the same thing has happened in the the UK at places like Goathland, the setting for "Heartbeat". I have been there twice, and it is just a pretty normal Yorkshire village teeming with visitors when the villages around are empty.

Just as strange to me is my reaction to seeing on TV places I have previously visited. For some reason that not only validates the place as having been worth visiting, but also makes it more real.

Hello,
I had the biggest laugh reading the Systran (Babel Fish) translation into French of your piece on Amboise. If I had not read the English version first, I would have wondered what it was all about.
Like your entries. Some beautiful photos.
Cheers.

The literalness of the machine translations can be fairly weird, and if you auto-translate any of the entries that have a lot of French words included, like the one on butterflies...well, a complete scramble with Babel Fish treating them as English words and trying to translate them. I did quite like 'brun de Dan' though in the Amboise entry ;-).
We really would like the blog to be properly bilingual, but just now, our French skills would give you as much of a laugh as Babel Fish.
I do have an entry waiting in the wings until we have a suitable image, on the correct pronunciation of 'Preuilly sur Claise' - that'll give you a laugh too I should think, so keep an eye out for that one ;-)
I'm glad you like the blog in English anyway, and I am genuinely sorry we can't do it in French too.
Susan

Hi.
Now you really got me worried! If tourists ,Americans or others, invade Amboise beacuse of som program on tele or some scenes in a movie.
-What is your blog going to for Preuilly sur Claise?
Hope I never will experience having to walk down Grande Rue shouting Howdy to people in Stetsons and cowboyboots.
Ehh do you really have to continue with your blog? ;-).

If ever you see me walking down Grande Rue wearing a Stetson I insist you say howdy to me.

Hello from an American living in Mozambique who has never even heard of Amboise before but most likely will stay there for my three day trip in two weeks!

Don't kill me but my other option I am considering is Loches, your favorite according to a TA forum post!

MY reason for leaning toward Amboise is quite simply, it's dot on the map! It appears to be quite central for the places I most want to see: Chambord, Cheverny, Chenonceau, Villandry, D'Azay le Rideau, a drive by Usse', the towns of Loches and possibly Saumur.

It's smaller than Tours, therefore appealing, lots of people (you yourself) have described it as charming so although there are other charming places to stay, it's not as if it's a dump! :)

I'm going in October so won't deal with the maddening crowds of summer (although I understand a tourist feel can still inhabit a place).

Loches just looks delightful and all the reviews are great, my only concern is the extra distance from most things. it seems rather silly when I only have three days to stay further out when, let's face it, how much time will I spend in the town anyway? Leave early morning and come back at night? I'm thinking I'd see as much by staying elsewhere but dedicating some time to visit Loches. And thus save some time in the car.

So those are my thoughts for my first, short visit to your region!

What do you think? How much time/distance would staying in Loches actually add to most of those destinations? Any ideas?

Also, on another post you show a special Saffron menu for 18 euro - is that really possible, a nice dinner for under 20 euros? We're on a tight budget and I was beginning to think I'd simply enjoy bread, cheese and fruit every meal! I do plan to take your advice and look for the restaurants with the white vans outside them! Hope they still work at night!

thanks for all the time and effort you put into Trip Advisor, you and several others have been MOST helpful!!!
Thanks, Laura

Amboise is OK - just not our cup of tea. It's about 20 minutes from Loches, so at most youre adding less than an hour to your travelling a day

Our regular budget for eating out in the evening is under 20€. What we usually do now if we are on the road is have the 3 (or 4)course lunch and just a single dish for dinner. This means lunch costs under 12€ and dinner about 8 - 10€. I am not sure how feasible this is in Amboise itself, you may have to travel out of town.