The Church at Marce sur Esves

We approached the church from the north. 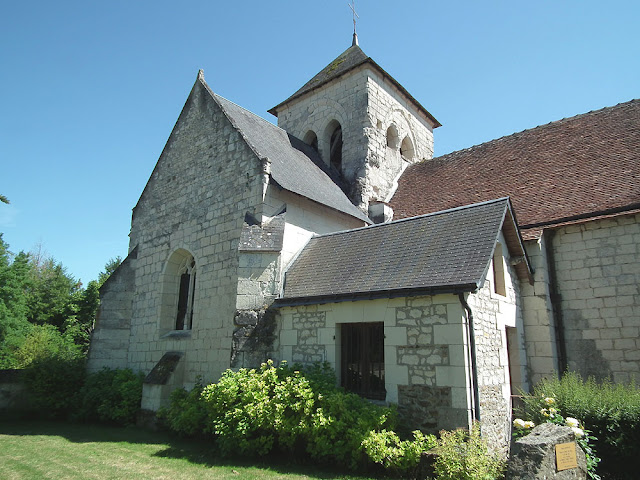 On one of our post lockdown exploratory outings we came across the church of Saint Martin in Marcé sur Esves. On the outside it is a small Romanesque building, old and cute, but very little to give away the surprises inside. But ever alert to something different, I noticed that the chapel window on the north side was coloured. Intriguing...

The simple Romanesque doorway, with its marvellously ancient and beat up door. 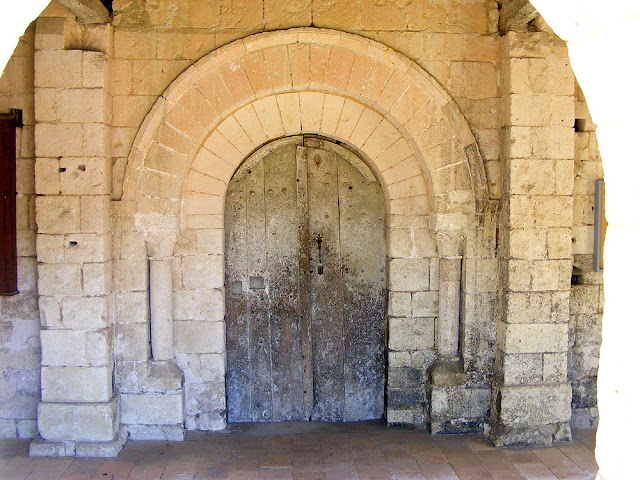 The church has a porch and a very charmingly aged main entrance. We were delighted to find that the door was unlocked and we stepped inside. Initially the view is disappointing. A very plain interior, with rickety uncomfortable looking pews and a couple of unpromising looking statues. Ho hum...

The small and simple church building, with porch and belltower. 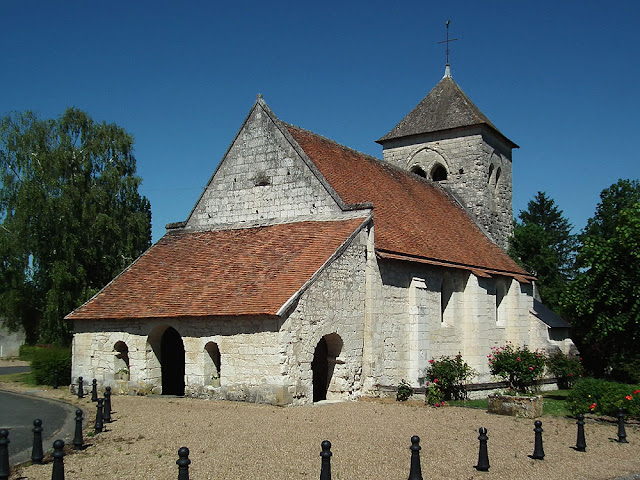 Undetered we ventured further inside and soon discovered the reason the church was so dark inside, even on a bright sunny day. The tiny Romanesque windows have all been painted in modern designs by artist Nobert Pagé. They are, the church blurb informed us, unique in the world. They give the church a very striking glowing low light, and I immediately liked them. I am always pleased to encounter a church that isn't stuck in a timewarp and is actively supporting contemporary artists.

The very plain and simple interior. 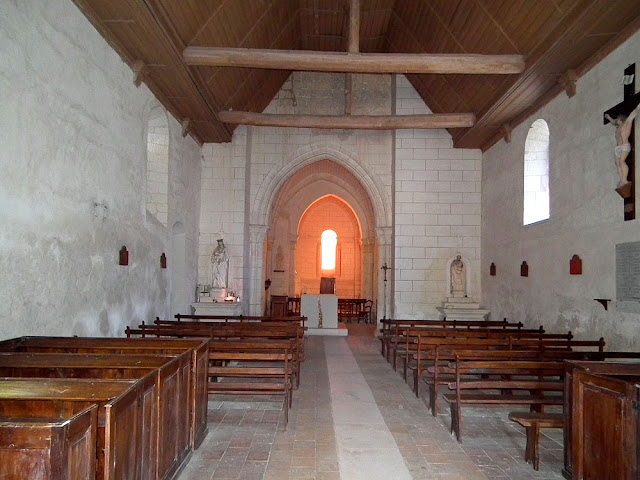 Then I noticed that the altar is modern too -- very simple and in keeping with the older parts of the church as they now look, but clearly a crisp new contemporary design. I thoroughly approved. 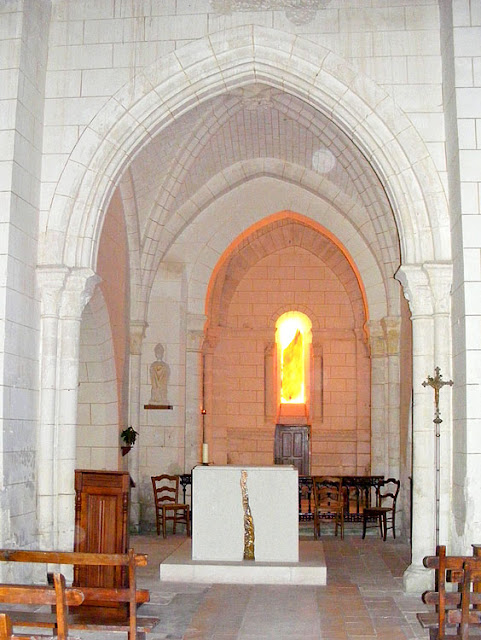 This little church, in the middle of nowhere, was the highlight of our outing. It made a great impression on us.


One of the painted glass windows, depicting the crucifixion. 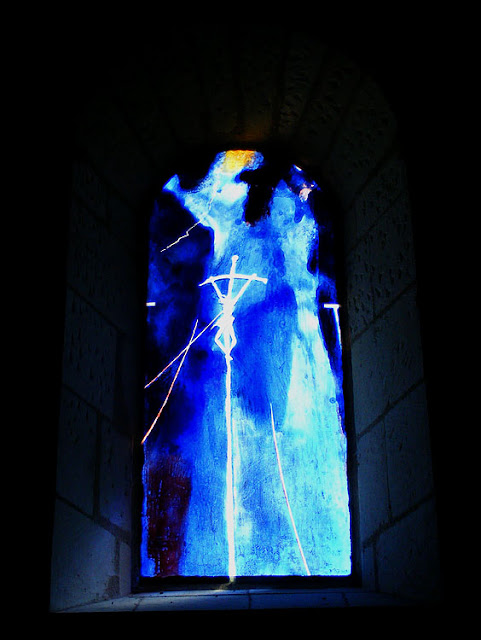 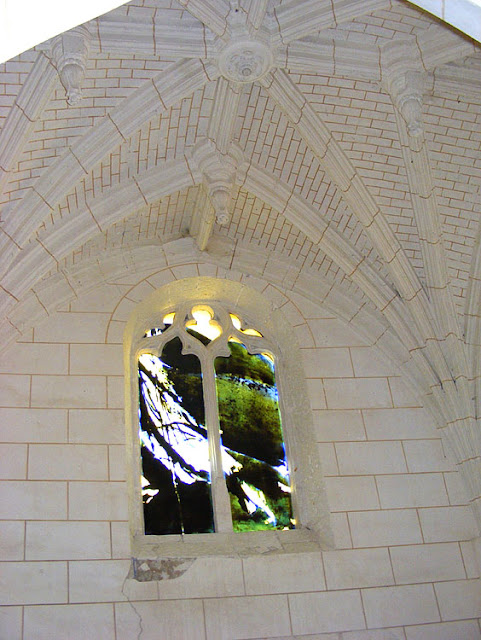 In the crossing in the middle of the church the square ribbed vault was rebuilt in the 13th century to support the bell tower above it. It's in the Angevine style, where the ribs finish on monster headed capitals in an arrangement seen all over Poitou from the 12th century. The chapel on one side was built in the 15th century by the Lords of la Louère, and features ribbed vaulting with a hanging key. The apse is from the second half of the XIIth century (1150-1180) built on a semicircular plan but trapezoidal inside. The nave is from the 11th century, more rustic than the choir, having been built by two or three monks sent from the Abbey of Noyers. The carpentry and panelled wooden ceiling is modern. The semi-circular door has two scrolls, the second of which meets small columns. The church houses ten stained glass windows by Nobert Pagé (1938-2012), installed between 2002 and 2003. The porch dates from the 17th century. 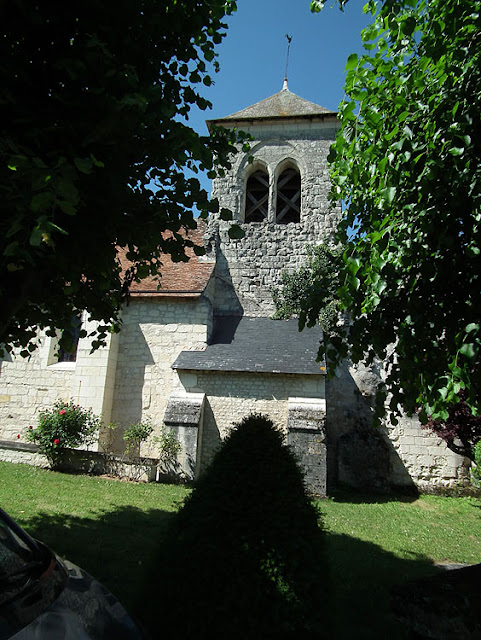 Also in the 17th century, in 1643, one of the locals, Claude Sauvageau, departed to live in Nouvelle France (better known today as Quebec). He died there in 1663 and there is a memorial to him next to the church. Inside the church the rosary of one of his descendants is on display.

Wow! Love that glass and altar.... my tick of approval, too!

Lovely little church. Do you mean the windows' glass is painted?

Yes, that's how I think it's achieved. It's not traditional stained glass.

Susan, I am sure you are spot on... one of my customers was Kansa Glass, suppliers of everything stained glass... one of their lines was fuseable glass in a paint form for exactly this sort of window... the artist paints the design on the pane which is then fired to fuse the design to the glass.