The Heart of the Village

For the past four months the centre of Preuilly has been in upheaval. The parking in front of the post office and the town hall has been completely dug up and redesigned. The new look is definitely an improvement and more practical, and includes a couple more parking spaces than we had previously.

The aim has been to beautify the area in front of the town hall to reflect its past as a grand town house. The idea is to create an agreable space for residents and somewhere that will be enticing to visitors. Around the beautified public space will be the doctors, dentist, pharmacist, post office and shops.


The council has bought the post office sorting office and it is being converted into a surgery for two health professionals. Although the mature linden trees from the parking space in front of the post office have gone, the area has been terraced and the curb dropped so access is easier. New trees have been planted. More parking has been created around the back of the former sorting office, new surgeries.


The parking in front of the town hall has been dug up and will be converted to lawn planted with roses and shrubs. Two parking spaces remain, one for people with a disability, one with a charging station for electric vehicles. There is also a bench, bike racks and a new digital town notice board.


Down the side of the town hall the one way system has been reversed, to encourage people to park in the existing spaces behind the building. 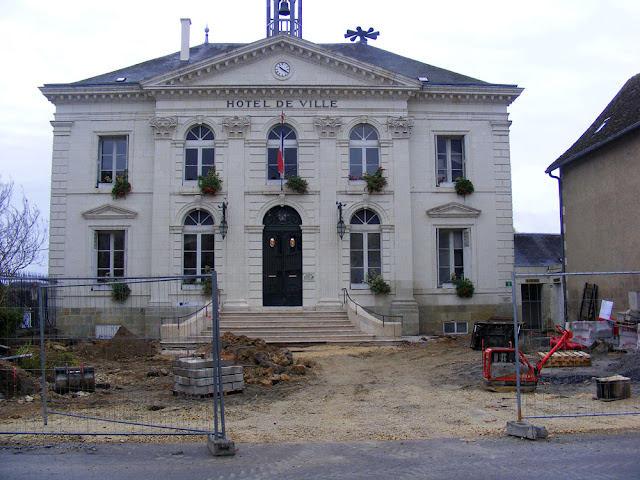 Initially most of the residents and quite a few councillors were skeptical about this project, but now that it is finished, the reactions are generally positive.

Looks good now, doesn't it? You can tell you're becoming more French calling a parking area a parking :).

I'm not sure that referring to parking like that is franglais for me. I think I've used 'the parking' for a long time. I can't tell whether it's a post 1970 Australianism or something I picked up in the UK though. I do definately have some verbal ticks that I've acquired since moving to France. The one I notice the most is using the phrase 'don't hesitate (to call, ask if you have further questions, etc)'. I don't recall using this phrase before we moved here, and it is a direct translation of 'n'hésitez pas' which I see and use all the time in French.