The other day we popped in to see some friends. Over coffee, served in small bowls made by a local potter, the conversation turned to prehistoric tools. Our area is famous for the fine flint blades made here in Prehistoric times, and the number of flint cores known as 'livres de beurre' (pounds of butter) that the manufacture of these blades left. 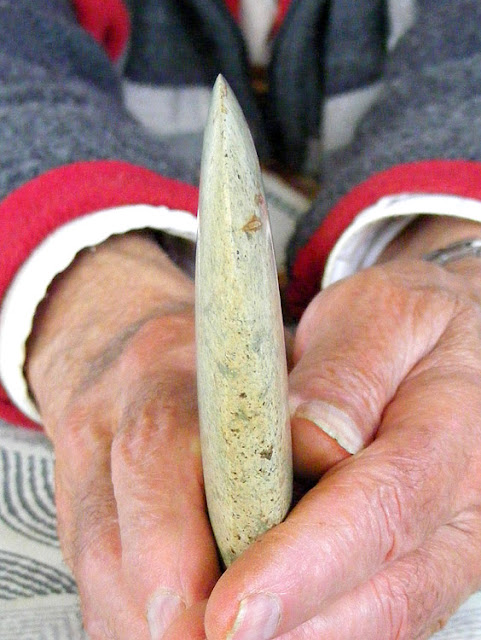 J asked us if he had ever shown us the stone axe he had found years ago on the banks of the River Creuse. He hadn't, so out it came. What an astonishing object! Smooth and nearly perfectly symmetrical, it is impossible to believe it was made thousands of years ago, and by rubbing one stone against another by hand, for hours and hours.

J told us he had been on his way to buy a mower in Pleumartin. He had a bit of time, so he stopped off at a ford across the river and had a potter about. He noticed something green in the mud and realised immediately that it must be something interesting.

His reading has revealed that it is made of jadeite, from a site in Italy. He thinks the axe was probably ceremonial or a status symbol, not a practical tool. There is certainly no sign of use on it. It probably arrived in the Touraine via the trade routes that already existed in Neolithic times, and that it may have been accidentally dropped while crossing the ford.

He is planning to leave it to the Museum of Prehistory in Le Grand Pressigny, as it is better than any of the similar axes they have in their collection.

This is amazing, incredible. It is absolutely perfect. I wonder if one side could be used as a buffer (polissoir).