The Fortress of Montbazon is open to the public from April to September and puts on lots of workshops and displays about medieval life. 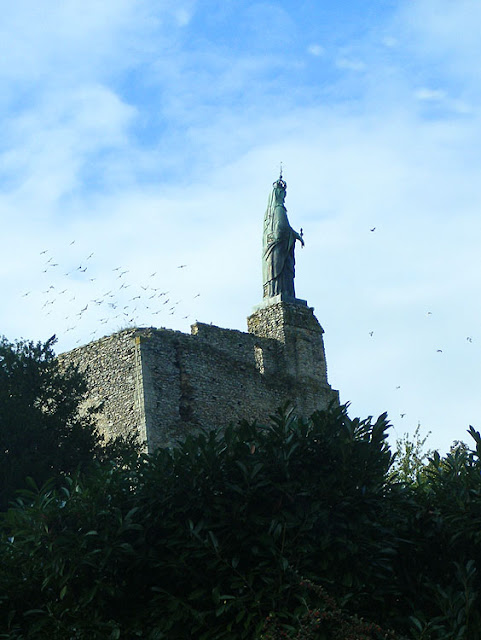 It sits on top of a rocky outcrop overlooking the town of Montbazon and the Indre Valley, controllng both the roads and the river access. It is one of the oldest fortresses in France, constructed by Fulk Nerra, Count of Anjou as part of his programme to rule the Touraine and defeat his enemy in Blois. Dendrochronology shows that the keep at Montbazon is much the same age as the ones at Langeais and Loches, so the 10th century keep is a contender for the oldest in France and it continued in use as a military stronghold until 15th century. At the end of its time as a fortress designed to menace the neighbours a luxury residental chateau was built and Louis XI, Catherine de Medici and Henry IV (Henry of Navarre) all stayed here for quite long periods of time. Three centuries later it was unoccupied and deteriorated to the point of being a ruin.

In the 20th century it attracted the attention of American landscape architect William Perry Dudley, who acquired it in 1922 and owned it until his suicide in 1965. Both he and subsequent owners the Attertons undertook extensive repairs, rebuilding and restoration. More recently, landslides endangering the houses below the 28 metre keep, have caused concern and disruption. 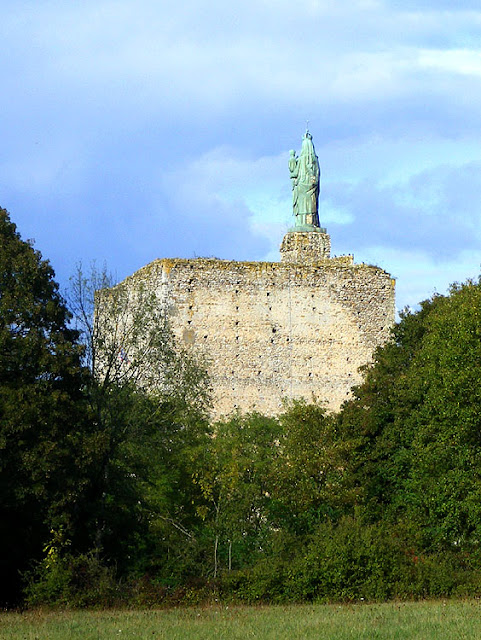 It is assumed that there has been a defensive settlement on this spur since before the Romans colonised Gaul. It is protected on two sides by watercourses -- the River Indre and one of its tributaries. To the south a defensive ditch was dug in medieval times, creating an enclosure of about 1.2 hectares. The town of Montbazon grew up after the fortress was constructed. The original fortress was probably made of wood, on top of an earth mound, replaced by the stone keep a decade later. The records hint that Fulk Nerra erected the castle here, without permission from the Abbey at Cormery who owned the land, but at the command of the King, Robert II the Pious.

The first phase of building in stone was a two storey keep, erected by Fulk Nerra at the end of the 10th century. His son then engaged in extensive repairs and rebuilding of this tower. In the second half of the 11th century a secondary tower was added and the height of the keep extended. During the 12th century it was controlled by the English Plantagenets, who dug some extra defensive ditches and built a chapel. At the beginning of the 13th century the French King Philippe Auguste wrested control back and built at least one other tower and joined everything up with a curtain wall. One of his towers collapsed in 2001. 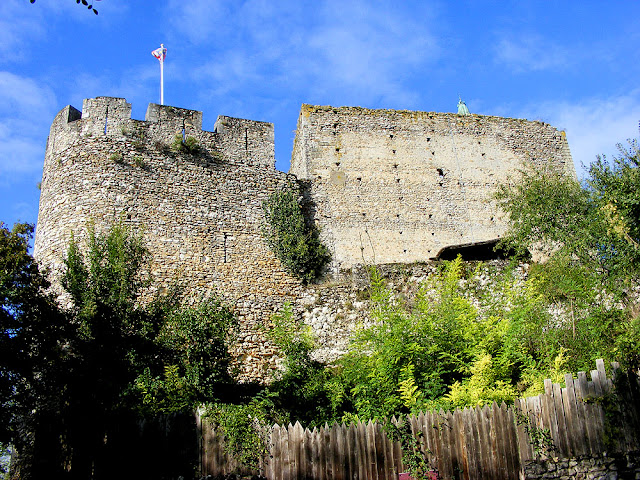 Around 1425 Guy de la Rochefoucald built a fancy residence opposite the old keep and divided up the lower courtyard. There are no drawings of this chateau, and the contemporary descriptions are vague. All we can really say is that it was large, multi-storey and grand enough to have housed Charles VII and his mistress Antoinette de Maignelais in 1450, and Charles spent the winter there nearly a decade later. His son Louis XI enjoyed two sojourns there, and Catherine de Medici, her son Francois II and his bride Mary Stuart were guests in 1560. By the beginning of the 17th century the new chateau was abandoned and was demolished in 1746. The rubble was used to repair the Route d'Espagne (now designated the N10). The chapel and a large part of the curtain wall suffered the same fate. The old keep itself only avoided destruction because it was so big and tall it proved too complicated to demolish.

In 1790 the fortress was fragile enough to be threatening to fall on houses in the town below and the top floor was deliberately knocked down a year later.  Two years after that all the crenellations were removed as a political act against despotism. Then in 1797 the tower was hit by lightning and cracked from top to bottom. 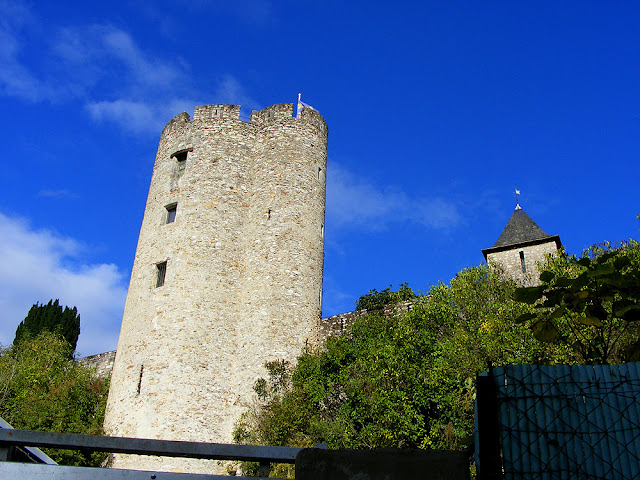 In 1823 a Chappe telegraph in the Paris-Bayonne line was installed on the highest point, with a little hut for the telegraph operator. It was replaced by an electric telegraph in 1853. In 1860 the site was bought by Joseph Delaville de Roulx and restored. Special care was taken with the north-east corner of the keep because the Empress Eugenie financed a gigantic statue of the Virgin and Child to be put up there. The idea was to attract pilgrims on their way to Compostella. Locals at the time were unconvinced by engineering efforts to reinforce the tower so it could take the weight. The statue was made by a local metalworker and is hollow, constructed of copper plates rivetted together, then partially filled with rubble stones and concrete to set her on the tower.

William Dudley bought the site in 1922 for 9000 francs from a de Roulx descendant, and lived there until 1939 with his companion the American painter Lilian Whitteker, who remained there until 1970. Once installed they became friends of Charles Bedaux and Fern Lombard Bedaux at the nearby Chateau of Candé, and Dudley worked on the garden of the Manoir de Fontenay with Joachim Carvallo of Villandry. Dudley was already married and in 1925 his wife Grace also moved in. The two women remained friends throughout and kept in touch even after the Dudley's divorced. After the Second World War Lilian Whitteker was friendly with fellow artists living in the area, Alexander Calder and Max Ernst. 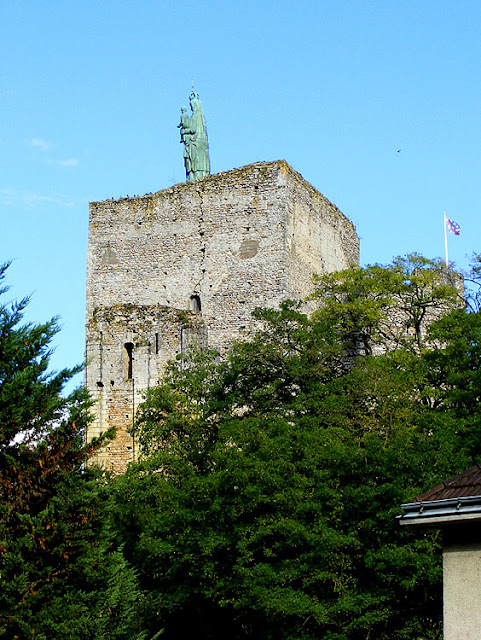 Dudley had volunteered for the US Marines when America entered the First World War and had discovered Montbazon in 1918, when he was sent to Chambray-les-Tours to convalesce after being wounded.  Initially there was only one habitable room, accessible only by an exterior ladder. They cooked in a wooden lean-to in the courtyard. They embarked on a vast programme of works that lasted more than 30 years and cost in excess of 127 000 francs. Soon after their arrival they rebuilt the tower in the southern curtain wall, becoming known as the Tour Lilian, and the extension to the east became their residence, with stained glass from the famous Tourangeau workshop of Lux-Fournier or old glass reset. They changed and improved the access, added back the crenellations to the towers and unblocked the entrances to the subterranean cellars. These underground passages are 14 kilometres of galleries on three levels going right under the town. Originally they were the quarries from where the stone to build the above ground fortress came. Later they became storage spaces and escape tunnels.

Dudley completely remodelled the park and adorned it with statues made by local sculptors or by himself. He planted some vines and created a Gothic garden to the south of the keep. The final job was to consolidate the keep in 1957, which was starting to buckle under the weight of the Virgin. The solution was an internal cement belt. There were concerns about the great crack in the tower and a monitoring device was installed. Dudley made his only post-War visit to the site to supervise these works. It was Dudley, soon after acquisition, who got the fortress listed as a Historic Monument, and also opened it to the public, although very few came.

Five years after Dudley's death, the complicated inheritance case finally came down in favour of his second wife and their daughter. The town of Montbazon, in the expectation of becoming the owners, had developed a plan to turn the site into a venue for artistic creation. Pragmatically, they intended to allow Lilian Whitteker to continue to live there, since she showed no sign of being willing to move out. But in 1970 the new mayor rejected the project and refused the inheritance. Dudley's family just wanted to get rid of the place as quickly as possible, but they were out of luck. By the 1980s the place was badly deteriorated, the statues stolen from the park and the stained glass carried off.

In 1999 an anglo-french couple called Harry and Jacqueline Atterton bought the site with the idea of restoring it and opening to the public, which they did in 2003. In 2009 a property investment group bought the place and continued the work the Attertons had started. Since 2010 their charity the Chevaliers du Faucon noir have run workshops, events, reinactments and guided visits.

That is a fascinating story.....
"To the south a defensive ditch was dug in medieval times, creating an enclosure of about 1.2 hectares."
So, on a spur with defences across.... much like the Eperon de Murat

I agree with Tim, this is a fascinating story. Les tribulations de la forteresse de Montbazon.

In my opinion, the fortress could do without that obnoxious statue. It should be removed; it belongs in (or on) a church, not on top of a civil ruin. I am one thousand per cent for the separation of (any) Church and State.

Fascinating indeed. Difficult for me to envision a habitable interior.

Yes, they are both Eperons barrés.

It's quite awful isn't it?! Totally not to modern tastes, and I suspect not to most people's taste when it was erected.

Yes, I've got no idea what the inside looks like. I've never even entered the compound.