A castle called Grillemont in this place, near La Chapelle Blanche Saint Martin, first appears in the written records in 1050. Sometime around 1200 the place came into the hands of one of the founders of the Knights Templar then around 1465 the chateau became the property of Roland de Lescoët. He held many high offices in the court of Louis XI, being his chamberlain, councillor, Grand Master of the Hunt, and Governor of Loches (where the King spent much time). Louis XI would travel between his main residence of the Chateau of Plessis les Tours and his favourite hunting lodge in Loches, via his chamberlain's Chateau of Grillemont. He would be accompanied by other members of court, ranging from Tristan l'Hermite (the Lord High Provost of France, who was in charge of security) to Olivier le Dain (the King's barber). De Lescoët turned the castle into an imposing fortress.

In 1739 the chateau was bought from the Lescoët family by François Balthazard Dangé d'Orsay, Secretary-Councillor to the Crown and one of the fabulously wealthy and notorious 'tax farmers'. François Balthazard was responsible for making major alterations to conform to the taste of the day, including demolishing the keep and creating many more openings for windows and doors than had existed previously. Inside he created a huge music room and a grand staircase. The Dangé d'Orsay family didn't last more than a couple of generations at the chateau before selling to Hippolyte Collineau in 1798. He was an arms manufacturer and dealer from Nantes, and sold the chateau a decade later in order to fund the purchase a parcel of land elsewhere. Thus it was acquired by Louis Auguste Pilté, from Orléans, who had made a fortune from vinegars and brines. 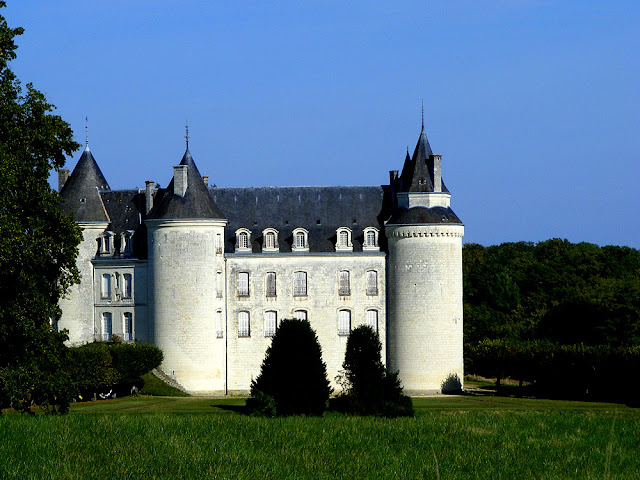 Pilté exchanged his chateau with one in Calvados owned by the Comte de Gasville. The Comte undertook major works at Grillemont, including adding an east wing and tried unsuccessfully to put the land to sugarbeet cultivation. Gasville appears to have got into financial difficulties and sold all the contents. The chateau remained unoccupied for several years until 1850, when Poitevin banker and humanist Gérasime Lecointre bought it at auction.

At the end of the 19th century the Lecointre descendants embarked on a major restoration managed by the municipal architect for Tours, Charles Guérin. They wanted a comfortable modern home and so installed modern wonders such as central heating. The Prussian War of 1870 and the First World War of 1914-18 passed by without much direct influence on the chateau, but that cannot be said of the Second World War.

Initially the chateau was seconded as offices for the Ministry of Commerce, but it was soon taken over by the Germans and 500 of their horses. Then from February 1941 to February 1943 it was barracks for German border guards.

The chateau had ended up in the Occupied Zone, very close to the Demarcation Line, guarded by some thirty-odd German soldiers and their dogs. It became a prison, incarcerating 846 people who would then be taken to Tours for trial. Finally, the last occupation was a group of nuns, evicted from the Hospital of Saint Gatien in Tours and in need of a new home, with their chaplain. These days it's a private home, open to the public for guided tours in the summer.

Today three medieval towers are extant, as well as the medieval inner courtyard wall. To the north of the chateau are the service buildings, which date from the third quarter of the 19th century. Both the chateau and the service block form U shaped buildings around their respective courtyards.

I had no idea of its existence. Looking round privately owned châteaux that are still someone's home is possibly even more fun than visiting the unoccupied ones so we'll definitely be paying this one a visit next year.......all being well.
I remember our late friend Barrie saying that he had explored La Chapelle Blanche Saint Martin a few times and never found a white chapel anywhere. I wonder if it's in this château.

I've been reading up on La Chapelle Blanche Saint Martin. There is definitely some exploring to be done there. The white chapel is not connected to this chateau as far as I know.

What a pretty chateau! And a beautiful day.

And they've very kindly left an allée so you can view it from the road.