It is now 12 months since we decided the old granary is the right house for us.

In that time we have paid many visits to the house, but work has been restricted by the amount of time we can spend there. The longest stays we have had in Preuilly is a week; Christmas 2006, February 2007, and May 2007. This time we went for broke - 2 weeks, half of which would be spent working on the house. We had booked Mme. Fouchécourt's house in Roux, near Boussay. My parents were with me, and Susan was going to join us for 4 days next weekend.

We arrived at about 19.30 on the Saturday evening, and immediately drove over to the house to pick up our supply of food and clothing. Amazing, although it hasn't stopped raining this year (this will become a lietmotif) the house didn't feel very damp, even though there were pools of water on the stairs. I think this is a result of the house being made of limestone. Hopefully, once the hole in the roof has been fixed the house will feel dry and warm during winter, and dry and cool in summer.

On Sunday it rained, so being tired from the drive the day before we had a quiet day, shopping and visiting some of the local villages. We visited la Roche Posay and walked along the abandoned rail line across the Creuse river. Although we didn't get wet we had some amazing views of approaching storm clouds, and by the time we got back to the car it was obvious the weather had set in. As we drove back through the village I was amazed that the end of the market square we were entering town by was in sunshine, but it was raining so hard at the other end (about 80 metres away) that we couldn't see any of the buildings there.
Approaching storm, la Roche Posay 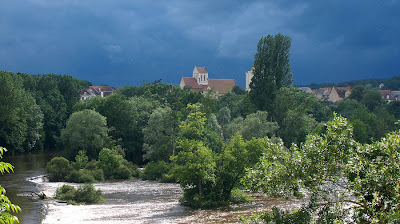 On Monday it was raining (again) so we went to Richelieu and Fontevrauld. The weather turned out not too bad in the end, and we had a good day exploring the garden at Richelieu before moving on to show mum and dad the abbey which Susan and I had visited in November.

The rest of the fortnight was spent doing a couple of hours work a day, followed by an excursion. Dad and I made a shutter for the window of our storeroom (currently the guest bedroom) and mum chipped all the weeds out of the garden. In addition to this we stripped all the "lovely" 1980s wood panelling from the kitchen and the remainder of the wallpaper from the upstars rooms.

The back of the house showing the new shutter 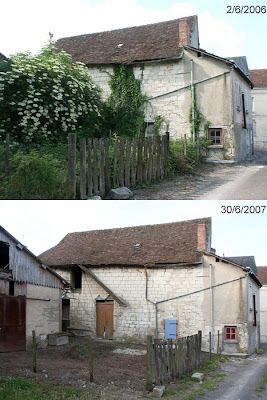 We also paid a visit to the Philosophical Roofer. He had originally scheduled our roof for May, then June (It is now the middle of July and still no sign of work). The main problem has been the rain - he hasn't ever know anything like it, apparently. Certainly we can understand how continual rain affects how much work a roofer can do, and we certainly don't want our roof taken off while the "sunshine" is more than 99% liquid, but it is frustrating. I suspect it is just as frustrating for M. Galland, because he keeps on getting two Australians cluttering up his office and looking naively hopeful.

The main hole (or one of the main holes) in the roof is directly over the stairs, and it does get rather damp. Unfortunately, the staircase would appear to have breathed it's last, having given in to the stresses of being soaked every time it rains. The fact that mum happened to be standing on the stairs when gravity took it's course is not coincidental. No bones broken though! Of course, the damage means that we have to speak to a menuisier (roughly tanslates as joiner) to get the stairs either restored or replaced. This may be an advantage in a way - at least now we know how long the stairs will last..................

The kitchen in progress. 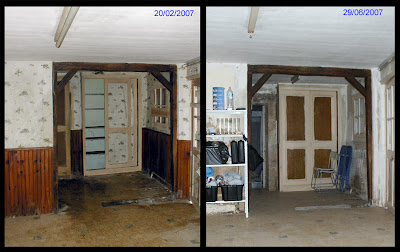 Our big excursion was Chenonceau, which Susan has already written about. We also visited Poitiers, a town we have driven to and through, but never spent time in. The churches are magnificent! I am not sure if the painting in them is original, restored or recent, but they are jewells. I never cease to be amazed by what can be found in the least likely of places. 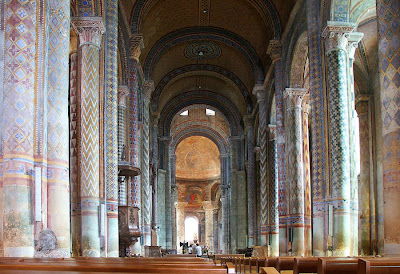 One of the advantages of having spent 2 weeks in the house is crystallizing our ideas for what we want to do with the house - and how we will progress.

Email ThisBlogThis!Share to TwitterShare to FacebookShare to Pinterest
Labels: Churches, Kitchen, la Roche Posay, Our house in Preuilly, the Brenne, Towns and Villages near Preuilly

May we say: welcome to France and Preuilly.
Bengt et Suzanne Ungestal

the church interior at poitiers is mind boggling. is that sort of standard medieval french motifs?

Purejuice - there a quite a few churches in France painted in this magnificent manner.
Susan