A Trip to Chenonceau 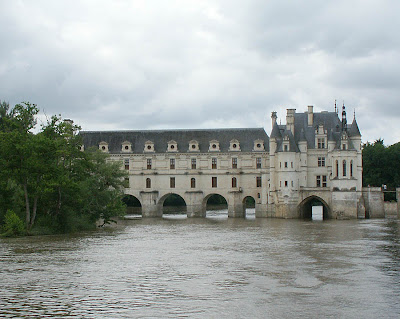 Chenonceau doesn't look promising from the car park. There are a dozen coaches and it doesn't look like there are many empty parking spots - but it turns out to be one of those places that swallows the punters up with ease. A few minor bottle necks in congested doorways in the chateau itself, but otherwise the numbers of visitors is not a problem. We had a simple lunch of blue cheese on 'tricolor' ficelle

with fresh apricots to follow - all from Loches market earlier in the day. We had to sit on the canal bank and fend off very bold and persistant mallards because all the picnic tables were occupied, but were quickly fortified for the stroll down the driveway to the chateau. Everyone seemed to be streaming in through the front door, so we took a left turn and started in the impressive formal garden. When the crowd had dissipated we nipped in past the faded but still beautiful carved wooden front doors and began our exploration of the chateau.

Chenonceau is presented as a house of women - Diane de Poitiers, Catherine de Medici, Louise of Lorraine, and Madame Louise Dupin who saved it during the revolution. Any men - Louis XIV, César de Vendôme are presented in light of their relationship with the women. This is a charming conceit that I am sure is an effective drawcard to romantic women everywhere. I did think it was a bit rude of the curators to hang a 19th century 'portrait' of Catherine de Medici in the 'bedroom' of her principle rival, Diane de Poitiers though (Diane was evicted by Catherine on the death of Henri II).

The house is fairly sparsely furnished for display, but there are many fine paintings, fireplaces, painted exposed ceiling joists in the best French tradition and of course, stonkingly rare and valuable tapestries (several of which are quite entertaining if you take the time to look at the detail). Many rooms have most interesting painted textile wall coverings, albeit heavily restored in places, and of course, a range of very grand beds. The visitor reception room on the ground floor once had the most beautiful floor of blue, white and yellow maiolica tiles, now with their glaze completely worn away except on the tiles closest to the walls. In every room there were also enormous flower arrangements featuring foxtail lilies, agapanthus, copper beech and ferns and the like. Frankly, many of the visitors were much more interested in these than the furnishings. I think most people vote Louise of Lorraine's black painted bedroom as the best bit, decorated with the symbols of tragic widowhood (Henry III was assassinated) at the top of the house. 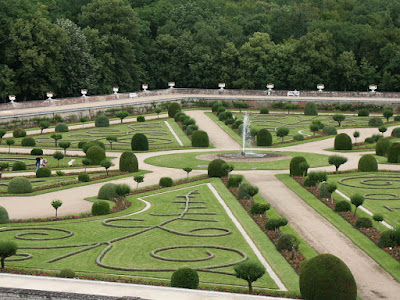 The grounds are extensive and heavily wooded, with many walks criss-crossing. We were treated to a Banded Demoiselle female in perfect glittering condition indulging in a bit of seductive wing waving in the long grass by the river, and a nuthatch hopped about up and down the base of a cedar tree long enough to be photographed several times, completely unbothered by excited wildlife enthusiasts gibbering and pointing at him from a distance of about 10m. There is a delightfully perfect 'model village' and a huge potager. Simon and I were sooooo envious, and it was soooo neat and tidy, with a section for cut flowers and some friendly donkeys at the end. 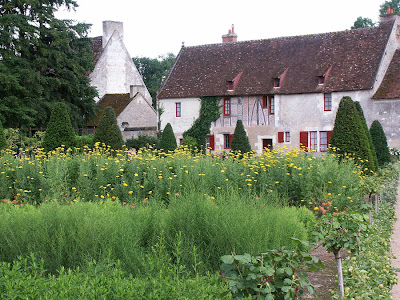