Why France, and why Preuilly-sur-Claise....

We have been asked this question a number of times; parents, friends and stranger all want to know why a pair of Australians would move to London, and then 10 years later decide to move to France. I can't answer for Susan (I wouldn't be so bold), but the easy - and slightly trite - answer is "why not".

The long answer is more elusive:

We decided that we didn't want to be renting a house for ever in London, but we knew we could never afford to buy here without a massive mortgage. The trouble with mortgages is that they have to be paid back, and neither of us wants to be working for ever just to provide a roof over our heads. When we bought our houses in Australia, mortgage rates were over 16%, and the thought of exposing ourselves to that sort of stress was just too much.

We started our house hunt looking at places in the rest of England, but it quickly became obvious that no matter where we looked to buy here would involve a mortgage. We were considering Wales until we realised that we speak more French (in my case 2 words, in Susan's case quite a bit) than we do Welsh (none whatsoever), and we didnt want to be foreigners living in an enclave all our lives. We knew we wanted a garden where we could grow a lot of our own food, and do some sort of tourism based income generation.

The view from Preuilly-sur-Claise 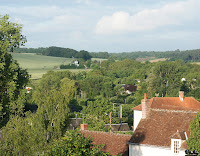 I am not sure why we decided on central France, but all the properties we looked at seriously were in a band roughly following the Loire Valley. The closeness to airports with links back to London was a factor. The overriding consideration, though, was that we liked it first time we visited. It isn't an area you hear a lot of in the ex-pat press, but "the Loire Valley" has a ring about it. It has a really varied landscape (the only element missing being proper mountains), the big chateaux, working countryside, and Susan was excited by a couple of birdwatching reports she read about the Brenne Regional Natural Park.

When we first saw Preuilly it was with an estate agent when we went to inspect an old Boulangerie. That house didnt work for us, but the town held appeal. It isn't a tourist town, it is a proper small regional centre town, where people live and work. All the shops are there, and although there are some empty shops on the Grand Rue, it still feels like it has life in it. It helps that the people are friendly (although whether that is due to lack of a large ex-pat community of because of one we aren't sure), and seem interested in what we are trying to do. All the neighbours have stopped by to tell us we have a lot of work on our hands, but give the impression they are glad someone is trying to do it. There are some good restaurants nearby, some beautiful scenery (the rivers in that part of France are seriously pretty), lots of history.....

The Vienne river at Bonneuil Matours 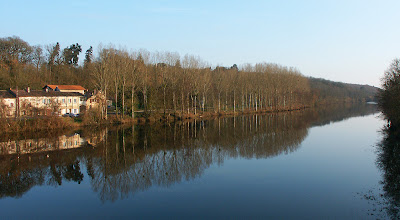 We are also moving to Preuilly, we have had our house there for three years and are about to take early retirement. I have enjoyed your pages and agree wholeheartedly that it is a beautiful area of France. Perhaps we will bump into each other at the Intermarche.
Glynis and Mick

Very much interested by your Blog. We have had a house in Preuilly itself for a short time after years of dreaming. In three days time we shall be free to decide when and how long we spend there. Enjoyed your history of buying and intrepid early occupation. We were very pleased to find a Lizard Orchid in our garden and so were fascinated by your comments on Orchids. Most of all we have been grateful for the interest and kindness shown by all our neighbours. We hope to meet you the best way, shopping in the town, or eating in the hotels.

HI Susan and Simon,
My husband and I have just returned to NZ from France. We are in the process of buying in Preuilly Sur Claise. We were travelling through the Loire Valley and just happened upon this Village...we took a wrong turn but we can't believe our luck!!! already we know its friendly but it has everything we dreamed of . The process of purchasing is slow ...incredibly slow and I wonder if you have any pointers?
Dawn Anderson NZ

We found the process of buying more or less the same as in Australia and the timescale established in the compromis de vente. It seemed fairly straightforward, and certainly more straightforward than any purchase in the UK would have been. The one thing we would do differently if we were buying now, with hindsight, is not go anywhere near a real estate agent. We'd just use the notaire. Our house was unoccupied when we bought it and we did not need a mortgage. Perhaps that made a difference to the smoothness of the transaction.