I have just returned from 5 days in Preuilly on my own.

I had an email from my Canadian friends Don and Leslie, who were set to accompany a school group doing a "Canadian Battlefields" tour, to say that they would be visiting Paris, Rouen and Lille. I decided I would drive down to Preuilly, stopping off in Rouen on the way and we agreed to meet for dinner

A gratuitous picture of Rouen Cathedral 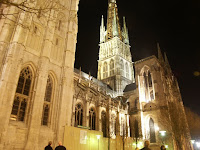 Rouen is quite possibly a pretty town. I hope the residents of Rouen like it, and can find their way around. I can't. I was so lost on Wednesday evening that I was beginning to doubt my own existence. The big problem as a tourist is that any map you buy or print shows road names. The street signs all point to places not shown on your map, but the street names are on metal plaques high up on building walls, and apparently painted over in 1935. This make navigating whilst driving nigh on impossible. I went around one roundabout 8 times. Once I went around it twice in succession, trying to work out which exit it was I had decided to take. 90 minutes later I was still lost. Then, heading the wrong way, I passed my hotel. This meant finding somewhere to turn around (almost impossible in a town that has trams). Still - I was only an hour late for dinner.

After dinner, I got (almost inevitably) lost again, heading towards Dieppe before finding somewhere to turn around.

After a 4 hour drive the next day I arrived at the house in Preuilly. As soon as I arrived I decided I wasn't going to be staying the night. Even though it was midday I could see my own breath, and as I was recovering from a cold the chances of developing pneumonia seemed fairly high. Thus I booked into the Hotel L'Image for two nights.

After doing that I went back to the house and started work. I had taken a radio with me, so listening to the World Cup of Cricket on BBC Radio 4 Longwave I started to clean. This was the story for the next 3 days. 30 years of being uninhabited and uncleaned meant that just cleaning the surfaces was not enough. Everything had to be scrubbed a number of times, as well as treated with bleach. As we do not have running water yet I had to keep taking trips to the sports field to fill the 20 litre water bottle, which was not as much an inconvenience as it could have been, as the sports field also has a public toilet.

a kitchen then and now 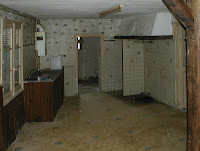 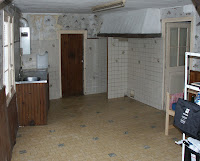 As well as cleaning the kitchen I called into Bertucelli the plumbers to drop off the signed contract and find out when the work can be done. Although "yesterday" wasn't an option, after explaning that "Je n'ai pas une toilette" the urgency was understood and we agreed that the work would be done before Susan and I return at the end of next week. No more trips to the sports field then!!

To save on money I had bought a pair of small gas camping stoves, so I was able to use the kitchen for it's proper purpose. This was quite exciting, cooking and eating the first meal in the new house - even though by 7.00pm it was bitterly cold. By candlelight most of the blemishes of the years of neglect are blurred out and it looks like a real home. 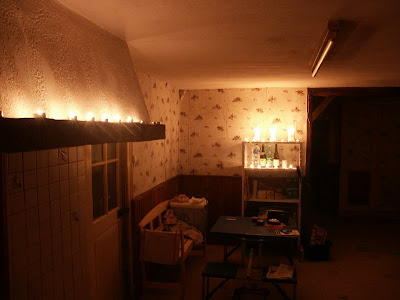 I ended up staying at L'Image every night, as a beer or two after hours of sloshing bleach around was really nice. It also helped that they have heating and showers. I MUST contact Don and Leslie to tell that contrary to their suspicions, they didn't encounter the smallest bathroom in the world, but I do know where it is..............

I left Preuilly at 8.30 on Monday morning, pausing only in Rouen (to get lost - as is now traditional - looking for fuel) and arriving in Boulogne in time to do some shopping before heading to Calais for the ferry. Whilst shopping I discovered "Nectar de Rhubarbe" made by Les Vergers de la Feuille. It's a traditionally made, 1% alcohol, sparkling rhubarb wine, just perfect for lunchtimes. I have a feeling that if we can buy it locally it will become a staple.