We have just returned from a week in Preuilly. Once again we drove, and once again the car absorbed an awful lot of gear, including a 2 metre extending ladder.

We got to the house by 5.30pm, almost 11 hours after leaving home. Everything was in remarkably good shape, and the house didn't even seem to have become noticibly dirtier than when we left last time. Quite a feat, considering how large the hole in the roof has become. First stop was Intermarche (the supermarket) followed by Bricomarche (the hardware store). The weather was so pleasant (about 22c) that we had our dinner (a nice, fresh, meat and cheese laden salad, followed by strawberries) out in the garden.

One of the local lizards which join us for meals in the garden. 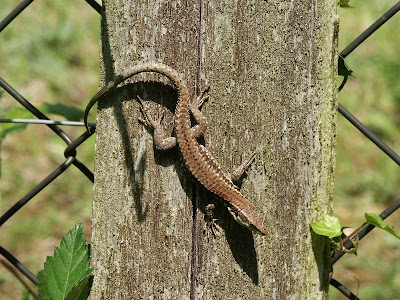 Sunday was spent cleaning, and tidying (as was the rest of the week, really) as until the roof is finished we can't really start on re-wiring or decorating. We did visit M.Galland to find out when we can expect the roof works to start, and he now says June. This means the roof will be off when my parents are in Preuilly. Hopefully. Or maybe even later, which I really do hope won't be the case.

As this was Susan's main holiday day of the year we didn't want it to be all work and no play, so we scheduled a half of each day for work and the rest being tourists. We had arranged with Liselle, a friend of mine from my days in Canberra (that's the capital of Australia, trivia fans) to visit for a couple of days. She arrived on Wednesday and threw herself into working on the house. While we worked upstairs stripping wallpaper, sweeping floors and making general improvements to the way the rooms feel, Susan was in the garden, using our new pick to fully uncover the cobbled area we found in the garden in February. 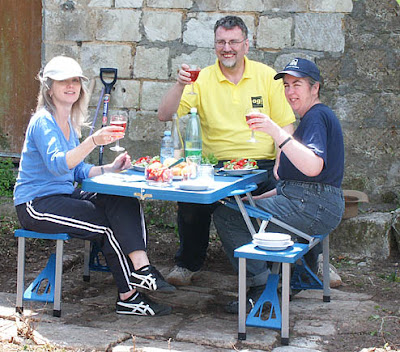 Of course, all work and no play makes Jack a dull boy, so we did some little trips around the area, visiting la Grande Pressigny, la Guerche, Chaumussay and Rouvray, taking time to look for orchids, for which the area is well known (more from Susan about this later). On Friday we went to Angles sur l'Anglin and the winery at Bossay. We also visited Loches for the Saturday marché, going on to picnic with our discoveries at Montrésor.

The Claise at Chaumussay 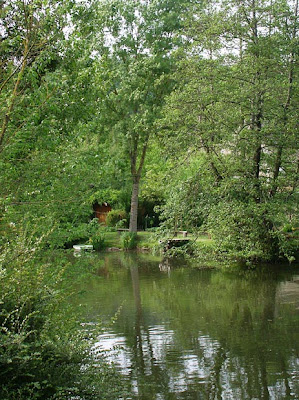 Liselle stayed at L'Image, which led to some interesting political discussions with Christophe (and because she speaks French , Jean-Michel as well). This was the week that Sarkozy was elected president, and the owners of L'Image hope this means that France will be made to work. Time will tell on that one - there is a lot of inertia to overcome. We are hoping it doesn't change France too much - but maybe at the moment that is just selfish. 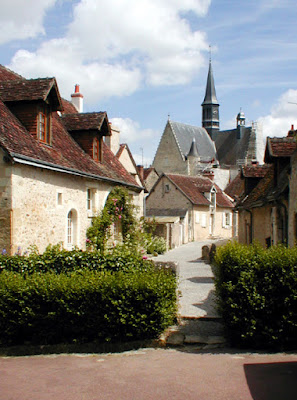 We managed to eat at 3 restaurants this week; La Claise where we had pizza, L'Image where we tried to have a light dinner, but ended up eating far too much desert, and La Promenade, where we had the 18€ menu. While at La Promenade Liselle had some problem with the Visa card reader, later finding out (at L'Image, after they phoned their bank) that a lot of French businesses have been given new card readers, but few instructions in how to use them. There is an almost hidden slot at the side for cards which arent chip and pin. Once this is found, the card worked. I think this pleased her..............

On the way home Susan and I made a diversion via the aqueduct at Luynes. 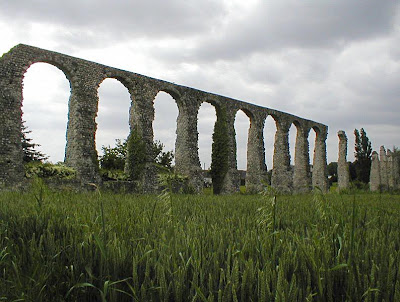 Next visit I will be travelling with my parents. I hope they love the area as much as Liselle did.

Email ThisBlogThis!Share to TwitterShare to FacebookShare to Pinterest
Labels: Chaumussay, Churches, Montrésor, Our house in Preuilly, Pictures of Preuilly, Towns and Villages near Preuilly