Last Saturday I popped over to my friends John and Alice's to scrounge some grape leaves to make dolmades. They are stuck in London due to Covid19 and Brexit, so their house here has been unoccupied for some time. And my grape vines got badly hit by frost in April and don't have a good supply of palm sized leaves, whereas the vine at John and Alice's was protected by the building it is trained along.

Once I got there I immediately noticed that a colony of feral honey bees had installed themselves behind one of the ground floor shutters. I emailed John and Alice to tell them and ask if they wanted me to organise an apiarist to come and remove them. Alice rang the next day and told me their cleaner Marie-Helene had arranged for a swarm or colony to be removed only about a month ago!

Unfortunately this is what can happen, as new swarms or colonies of bees are attracted to the smell of the wax once it is there. Marie-Helene is currently very busy with family matters so everyone was very grateful I was perfectly happy to organise the removal of the current lot of bees. I immediately rang my beekeeping friend Bernard and organised him to come over, then I rang Marie-Helene to say I was coming over to pick up the key to John and Alice's.

Bernard and his wife Brigitte came over to John and Alice's on Monday evening and we removed the bees. It took 3 hours to round them all up.

Bernard said he had never encountered such placid bees before. Nobody got stung and they didn't get too frenzied. Some of them legged it up the wall and hid under the gutter and we couldn't reach them. Some of them got into the house -- inevitable, but I think we did fairly well at preventing it. To open the shutter we had to open the window to access the hook but it was done quickly so not too many bees came in. Brigitte and I picked them up individually and chucked them out at the end, but John and Alice will probably find a few dead bodies when they finally arrive back. Any bees trapped indoors will die within days with no food of course.

A small group of returning foragers escaped the roundup. Bernard says they are not enough to form a new colony and will either die or push off to rejoin their original colony. They will all be foragers, who are the oldest members of the colony so they don't have long to live anyway.
Bernard says the window and stone surround will need to be cleaned to take away all traces of wax. Otherwise passing bee scouts will smell it and another swarm will move in. He says there are wax dissolving products you can buy. I've asked the neighbours to keep an eye on developments until John and Alice get here and at the first sign of a swarm I can get Bernard back. They may have to block up the gaps with rags or something too if they are going to be absent in May and June in the future when the swarms are looking for new homes.
Bernard says the bees we rescued are the Buckfast variety, which are famously mild mannered. We never saw the queen so it's possible we didn't get her. But to be honest I don't know how we could have missed her. I think she must have been hidden in a group of bees protecting her on one of the inner combs. Bernard says that it is not guaranteed that the colony will survive in their new hive. We'll need to wait a few days to see how they go. He's hoping they will though because they were so temperamentally good. 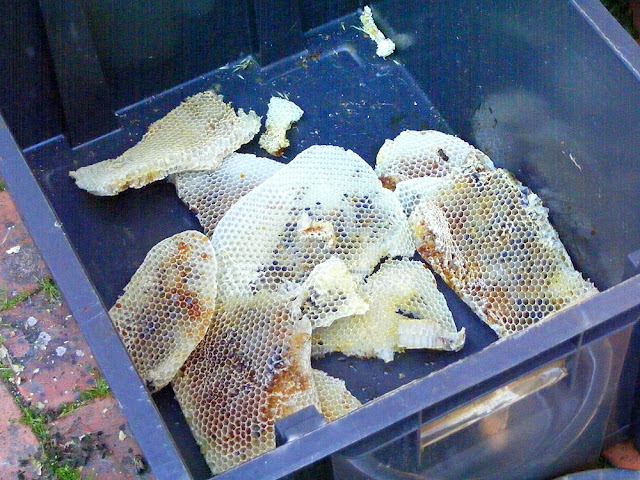 The relocation was done by Bernard first carefully slicing off each layer of comb. The bigger sheets were laid on hive frames and will remain with the colony. Smaller bits will get the honey extracted and then be melted down to form new frames. There were some brood cells right in the middle layer, so that sheet went into their new hive. We tasted some of the honey and it was really delicious and rather unusual in flavour. We can't work out what they've been foraging on.
Then Bernard sucked up the remaining bees with a vacuum arrangement connected to a hive.
Bernard and Brigitte are the nicest people. Bernard was saying that when he was a young man he lived opposite the church in the village and had a vegetable garden next to the cemetery. When he retired his children gave him 3 bee hives. Now he has a hundred and is totally hooked.

So, all good here and we all had a really fun evening together.
Posted by Susan at 09:00

What a lovely interesting story, how good it is to have kind sensible neighbours.

How nice of you to not only have them removed, but save the bees. We had a hive removed in April from the vent in our laundry room. It is an amazing operation to watch.

such an interesting and informative post. Thank you Susan!

You are leading an interesting life at the moment.....
Lovely and informative post... I echo chm

Tried to post this earlier, but probably forgot to click publish!
Do we know how the bees will know where their new location is? Do some bees in the swarm heve some kind of GPS?

Fascinating, and well done all!

What an ordeal for all of you, bees included! That looks like a pretty big hive. I had to arrange for a beekeeper to come to my two unit rental in San Diego (CA) to remove a swarm in the attic. They had to drill a small hole in the inside wall, and I believe smoked the bees through it, then removed them from the outside as they came out. The bees got a new home, and I got a bill ......