I have just spent 10 days in the house, sanding back windows, chipping out the old window putty (which was either very old or very badly done or both), re-puttying and painting. 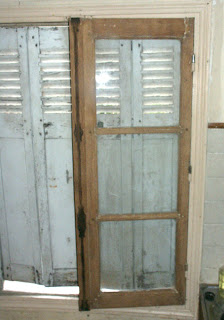 The window frames themselves are oak and really nicely made, painted in cream paint (lead based, naturally) about 30 years ago. The paint has set like rock, and was only removable by the application of industrial quantities of paint stripper and use of one of those nylon wheel attachment thingies (that's your actual technical term, folks) on an electric drill. Once the oak grain started to appear I was tempted to varnish rather than paint, but at some times in the past they have been sanded back with a disk sander, which has marked them quite badly. They have now been reputtied (except where I broke the 2mm "thick" glass) and undercoated, and hopefully next week I will be finishing the painting. At some stage I will have to get a couple of cracked panes replaced, but it's August and the glazier - along with everyone else - is on holiday.

I also used my new reciprocating saw to remove the two tree stumps that were previously stopping the garage door from opening full width. This is the sort of thing that excitement is made of..............

There were no excursions, unless you count visiting hardware stores.