Not the perfect start!!

When we decided to actually get serious about France, we started looking in the Charente. We had spent a magic week at Bas' place near Confolens, and naturally this was the first place we looked. Finding a house in our price range wasnt going to be easy though. There were a number of houses shown on the various internet sites, but they were in a condition even more perilous than we were prepared to take on.

Susan at dinner with Bas, Terracher 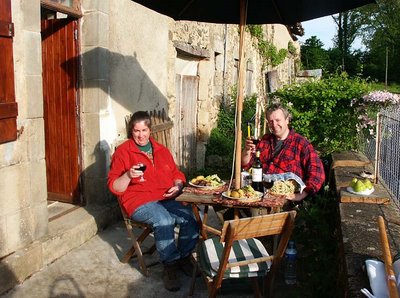 There were a number of criteria that had to be met. We needed a large garden of at least 2000 square metres for growing our self sufficiency vegetables. It had to have guest accomodation for paying guests. And it had to be in the country, far enough away from a town that it was quiet, but not so far away that the market was inaccessable.

For various reasons, all of them too distant in the past to be able to justify properly, we started looking at a small town called Argenton-Chateau in Deux Sevres. There was a nice large ex-forge overlooking the river which was just about in our price-range. After emailing the immobilier we waited......and waited. After a while, we received an answer, and arranged to see the property. Then 2 days before we were due to leave we received an email saying that it had been sold. We decided to visit Argenton-Chateau anyway, as our flights and accomodation had been booked.

The flight (from Gatwick to Nantes) was delayed by 4 hours and 59 minutes, meaning that we arrived at past 2.00am in France. BA had given us food tokens at Gatwick, but only one restaurant was open (and that soon closed) so I bought about £30 worth of biscuits and bottled water. At Nantes, BA booked us a hotel for free because the car hire place was, understandably, closed.

The house and it's view near Thouars 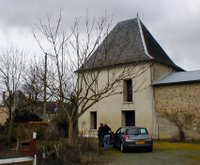 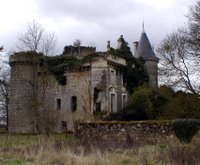 We went to the immobilier in Thouars, who took us to see a couple of properties. The best one was part of a farm complex, the rest of the farm still being in operation . It didn't grab either Susan or myself, even though it wasn't expensive, and the agent said the owners were willing to make a deal. The main problem is both houses were small, and it was out in the sticks. The garden consisted mainly of a huge concrete hardstanding. It had a great view though - a derelict chateau standing (but only just) about 100 metres away. On reflection, we may have been expecting a bit much!

The house at Argenton Chateau 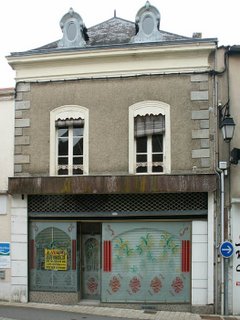 That afternoon, with another agent, we visited a few properties closer to Argenton Chateau. Once again there was no enthusiasm from either of us for any of the properties. I then asked about a propery that I had seen advertised, but which filled none of our criteria. It was a house which had been converted into a hairdressers at some time in the past, which stood exactly opposite the church, only 50 metres or so from the Market square.

For some reason this place really appealed. We told the agent we were seriously interested and left for the day. We spent the whole of the next day in and around Argenton Chateau, and on our return to London, decided to make an offer. We rang the agent, decided in consultation with him as to what our offer would be, actually put the offer in - and then the vendor decided not to sell.

This put us both into a bit of a sulk. The next trip was to be more inspiring.

Email ThisBlogThis!Share to TwitterShare to FacebookShare to Pinterest
Labels: Buying a house, Pictures of Chateaux